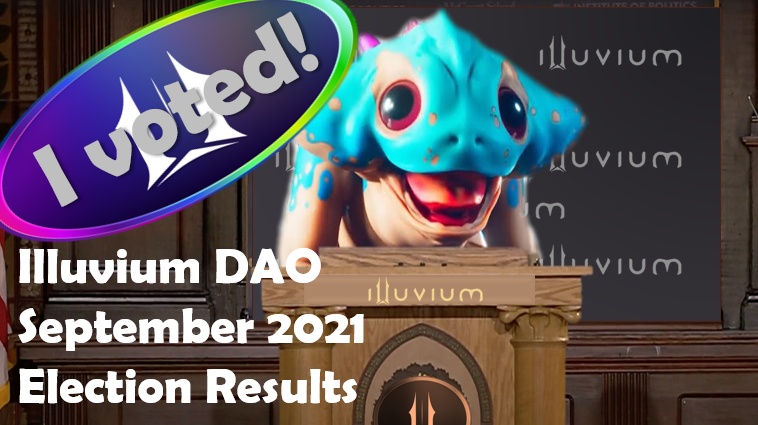 This weekend, the Illuvium DAO selected their five member governing council, the Illuvinati council.  Since staking has really ramped up in the past three months, this was the first election for many, myself included, in the DAO.  Today, I’ll cover the results as well as some commentary and analysis on this election.

Held over 72 hours (after a slight “false start”), every staking holder of ILV was granted the opportunity to select their candidate to govern the organization for the next three months.  Voting power is quadratic, meaning the number of votes (or vILV) is based on the square root of eligible tokens held.  The other critical aspect to remember for those staking ILV, voting is free, so I strongly encourage everyone to take advantage of this responsibility in November.  All you need to do next time is go to the link provided, connect your wallet associated with your staked ILV, and select a candidate from the list.  Voting is single choice, so each wallet gets to select only one candidate, who receives all of their vILV.  The five candidates with the highest number of vILV cast for them are selected as the Illuvinati council for the next three months, and are rewarded with 10 ILV per month for their efforts.

The largest vote cast was from a wallet with 552,378 tokens (743 vILV).  Smallest vote was a fraction of a single token.  In total, overall over 600 wallets cast votes, less than 10% of estimated staking holders

My personal opinion, I’m quite happy with the results, particularly, as there is a strong representation of the Discord moderators in this group.  I continue to be impressed by their passion and commitment to the project, and they have been a critical part of my positive experience.  Certainly, they are an essential part of the project's public success offering their helpful, informative experience to more than 90,000 members.  They have helped create my interest to develop content to support the DAO and inform current and future members.  I firmly believe that we are in good hands for the next three months.

The leading vote getter was Santiago RS with 15.78% with the final council member Anton Bukov receiving 11.75% of the vote. 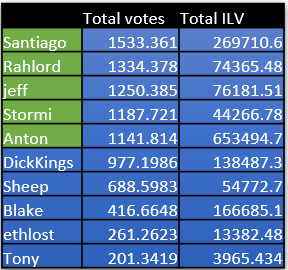 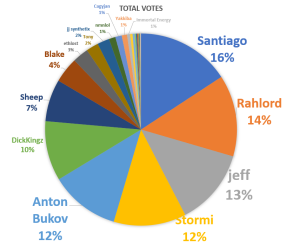 Holistically, I believe the quadratic vote weighting showed both its value and limitation in this election.  For anyone disappointed in the results in any way, the best thing you can do is share this post to your staking friends, and show the power that everyone has in this forum to influence the DAO leadership.  Also, keep reading, and share your feedback on the election model at the end.

Number of Wallets Voting Per Candidate

Total "wallet" votes received regardless of ILV holdings went like this: 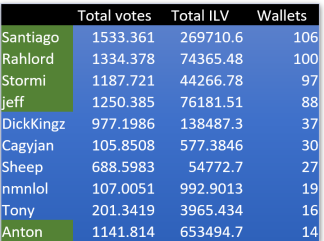 Four of the five elected council members topped the list, both in number of vILV votes, as well as the number of voting wallets.  Between jeff at #4 and former council member DickKingz at #5, the drop was quite abrupt, going from 88 to 37.  The fifth and final council seat was earned by Anton Bukov with 14 wallets, though we’ll get to those 14 in a bit.

Focusing on Anton Bukov’s votes, he was actually the selection by two of the four biggest voting holders, including the biggest holding voter (552,378 ILV, 743 vILV), and fourth holder (100,000 ILV, 316 vILV).  Those two votes alone took him to 1059 votes, which on its own would have given him his seat, topping Dickkingz’s fifth place total vILV by 82 votes.  In total, Anton won his spot by 164 votes.  Before folks get up in arms over how two dominating whales decided a council member, the voting block of Shrimp + Plankton alone (<25 ILV) cast 812 votes, so this margin could easily have been overcome even by only a fraction of the lowest budget members.  This speaks to the power of quadratic voting. 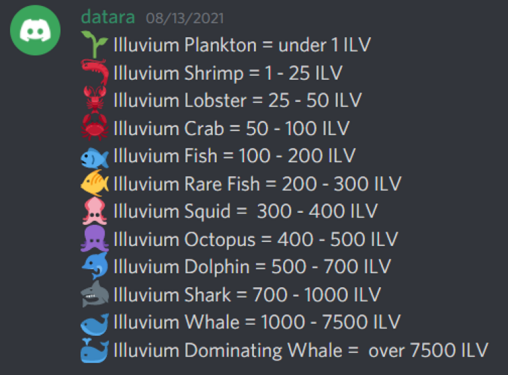 Even though the top whale voted with over half a million ILV, their total vILV count was just over 743.  With a total of only 2,372 ILV represented, the Shrimp (1-25 ILV) actually demonstrated more voting power.  Shrimp: 0.4% of the ILV held, 43.7 more vILV represented than the largest whale.  The benefit for the whale is that all their vILV are assigned to just one candidate.  However, the 164 vILV separating fifth and sixth place is quite a small number when you consider less than 10% of eligible DAO members voted, and nearly 10,000 total vILV were cast.

What if we just look at how the whales (>1000 ILV) voted?  Overall, likely thanks to early commitments at lower price points than we see today, there were 63 votes cast by wallets containing more than 1000 ILV.  These votes were cast across 11 candidates, with Rahlord and jeff topping the list with 10 whales each, followed by Stormi and Sheep at 9 whales a piece.  Sheep ended up seventh overall, with 33% of the wallets voting for them belonging to whales.  Interestingly, we see Anton Bukov barely on the list with 2 whales, but we know from above those two whales control more than 600,000 ILV.  So, if you’re a non-whale concerned by how few wallets it took to select a council member, know that even holders of more than $500,000 in ILV may feel the same way, with Sheep earning votes from 9 Whale wallets to the two by Anton Bukov. 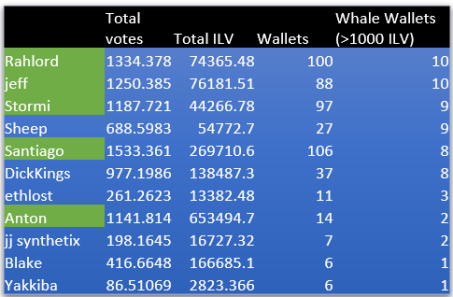 Now is a good time to show where the nearly 10,000 vILV votes came from in different bag sizes.  The divisions are broken down into twelve categories, ranging from dominating whales at 7,500+ ILV, down to Plankton at <1 ILV.  The largest voting block by wallet size was shrimp (1-25 ILV) with over half of all voting wallets containing this amount of ILV.  This group, while holding only 0.2% of the ILV cast 8.1% of all votes.  Note, it only took a little over 10% of the vote to earn a council seat. 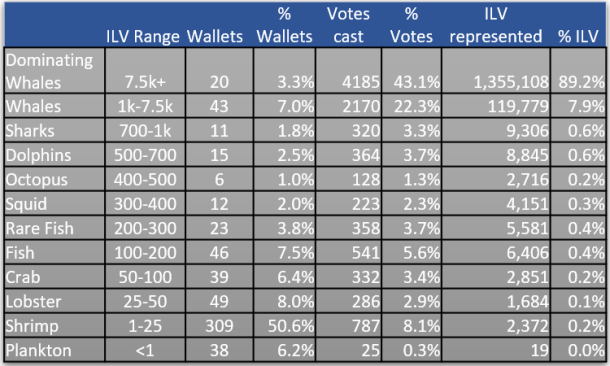 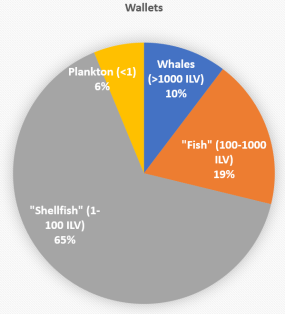 Certainly, Dominating whales ruled the scene, with 20 wallets each containing more than $3.5 million in ILV casting 43% of the votes.  However, due to the quadratic weighting system, this group owned more than 89% of all the ILV represented in this election. 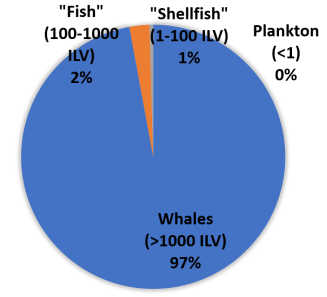 I will make the counterargument that a coordinated effort by the whales and dominating whales could have taken all five seats from this election, with over 65% of all votes cast by wallets holding over $500k.  At the same time, a coordinated effort by fish through shrimp would have cast 20% of the votes, easily taking at least one if not two spots on the council, while holding only less than 1% of all voting ILV. 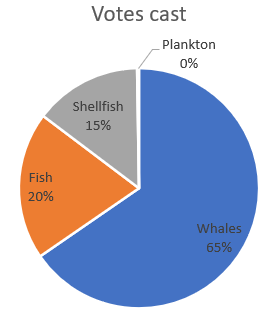 Here’s some quick analysis to show that the leading candidates were actually consistent across wallet sizes.  If we exclude all whales, here’s how the election would have turned out.  Stormi actually jumps out in front, with 686 of their 1187 votes (57.8%) coming from non-whale wallets.  Rahlord and jeff followed, with four of the five candidates leading even with whales completely excluded from voting.  Anton Bukov remains the one controversial choice, though they did remain in the top 10 in this block. 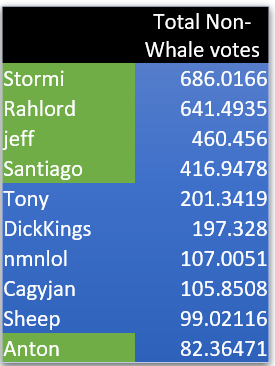 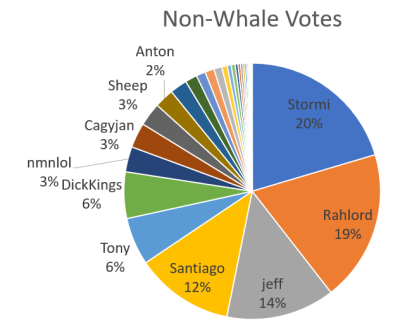 The same top four actually held true in all of my analyses - Fish through Dolphins, Shrimp through Crabs, and even Plankton had the identical top four candidates. 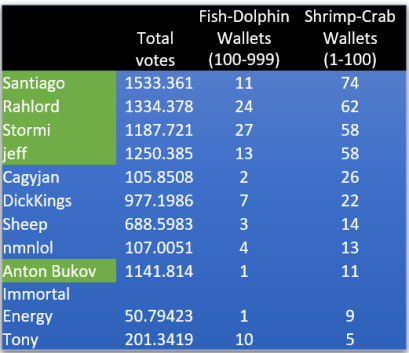 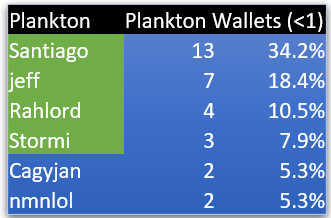 What if there wasn’t quadratic voting?

If we eliminate the impact of quadratic voting, how would the election have turned out?  Not surprisingly due to two of the four largest wallets voting for them, Anton Bukov jumps WAY out in front with 43% of all ILV in their column.  Santiago holds onto the number 2 spot, though Blake and Dickkingz jump into the top five, joining jeff.  Stormi has the biggest fall without quadratic voting dropping to eighth.  The gaps become quite substantial however, with Santiago only garnering 17.8% of the ILV, and Blake being the only other one over 10%. 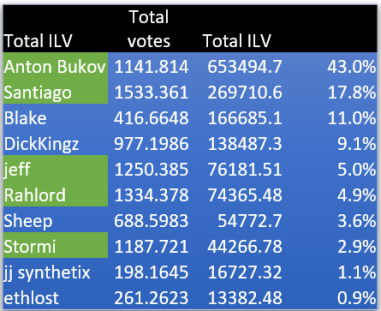 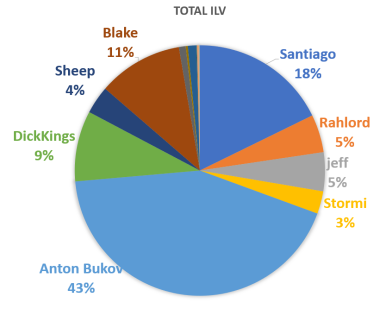 Eliminate the top four, what do you think?

If we drop the top four and look at a robust table of the next eight candidates, I would argue it’s hard not to agree that the five top candidates by most metrics earned their rightful spot to represent the DAO for the next three months.  My full raw data set is here if you’d like to evaluate the data further.  Doing quick head-to-head comparisons, DickKingz likely has the next best "claim," though the difference in non-whale votes was 197-82 over Anton Bukov, and he also relied heavily on whale votes, though from 8 wallets rather than just 2.  Comparing Sheep to Anton Bukov shows a narrow lead in non-whale votes (99-82), but relatively comparable numbers throughout.  The only other candidate in this set to top Anton Bukov in non-whale votes was Tony, though he did not receive any whale votes.

Obviously, the rules of the DAO are set (pending governance proposals), though Kieran indicated potential improvements for next election (including new candidate nomination requirements) and information available regarding decisions of current council members. 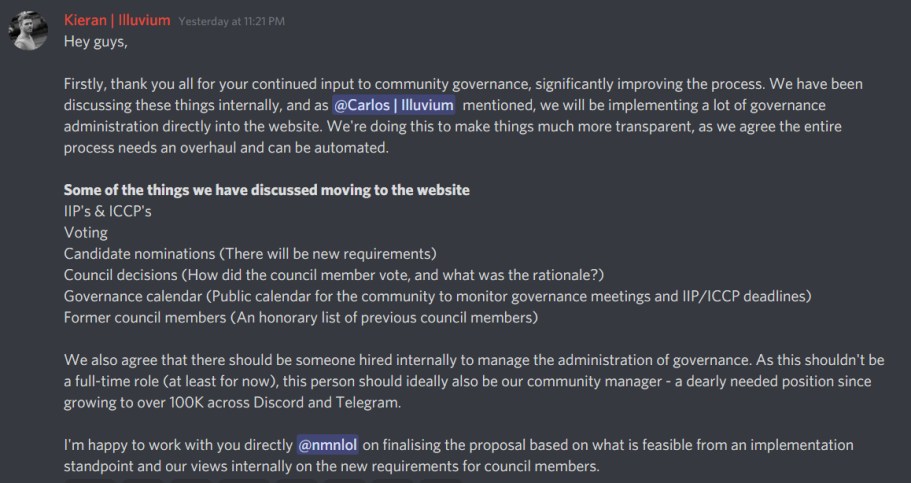 What do you think?  Did you vote?  Are you going to vote in November?  At that point, hopefully we’re celebrating the initial revenue distribution, all spending more time on our phones playing Illuvium Zero, and determining how much sILV or ETH to save up for the second round of land auctions.  I just ask that you congratulate the winners, thank the moderators for their service to the community, and do your part to keep our community positive and growing.