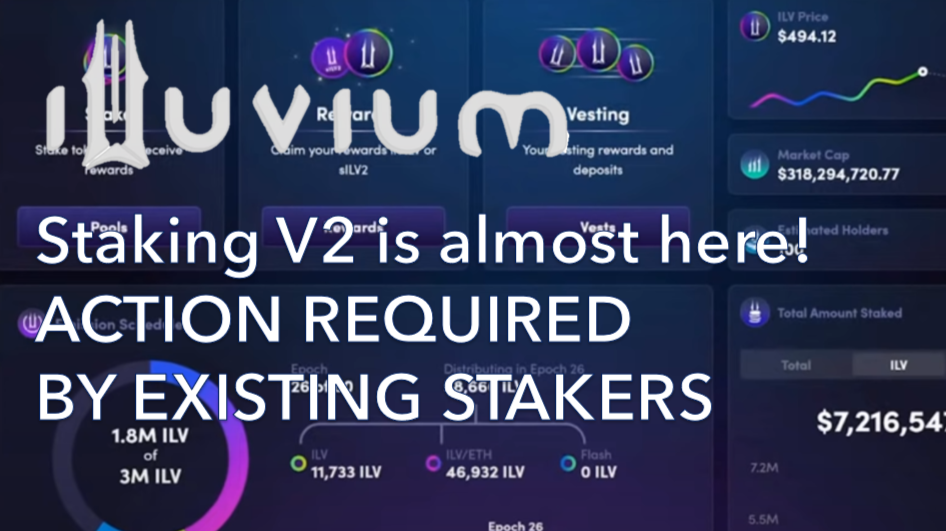 This week, the Illuvium community got an updated view into the pending staking improvements and reimplementation since the pause on January 20.  Here’s a quick review of the proposal (which has already passed with three affirmative votes from council members), and what it means to you, whether you’re already a staker or looking to stake in the protocol.  This is an update from my previous article here, and there have been several key changes and removals of expected features due to technical limitations.

If you’re currently staking, you MUST UPGRADE in order to continue receiving rewards after V2 is implemented.  Those who remain staked will receive manually calculated rewards (called accumulated rewards) since the pause.  If you unstake now, you will lose all pending rewards earned since January 20.  Once V2 is implemented, you will not be able to move wallets as was originally expected, but future upgrades may enable this.  If you want to stake, V2 should be implemented soon (as of March 20, 2022).  Those who stake under V2 should enjoy lower transaction fees than stakers in V1, which should enable smaller investors to participate with lower impact from Ethereum network fees.

What’s in the IIP?

After numerous audits, the original objectives of Staking V2 look to have been achieved, implementing security fixes resolving the issue with sILV, gas optimization reducing transaction fees, and enabling future flexibility and upgradability.  You can read the full proposal here.

One of the biggest overall changes is the elimination of flexible staking.  While in V1 it was possible to stake without a lock-up period, upon implementation of V2, all stakes must be locked for a minimum of one month, with a maximum lock period of one year.  Identical to V1, the longer your stake is locked, the higher your staking rewards.  A lock of one year will earn 2x the amount of a one month locked stake, increasing from 1x to 2x linearly.  This weighting applies both to staking rewards and revenue distribution.  The objective here is to ensure greater commitment from stakers, particularly as we approach major revenue events including the land sale and Illuvitar sale.

Identical to V1 - aside from flexible staking being removed, rewards rate is retained after the lock up period concludes.  This means if you lock for a year, earning at 2x weight, after a year, you are able to withdraw your stake. However, as long as you remain staked, you will continue to earn at 2x weighting.  The same is true for claimed ILV rewards claimed.  When claiming as ILV, you begin a 12-month vesting period, where the ILV rewards are placed in the ILV core pool and earn at 2x weight.  After one year, you may withdraw these ILV, however if left in the yield farming pool, they will continue to earn at 2x weight for both yield farming and revenue distribution.

What was changed from earlier proposals?

First, the upgrade/transition period is now only expected to be one week.  Previous discussions indicated an expected two week period to upgrade existing stakes.  Upgrading is defined as a transaction that enables the new V2 contract to read a V1 stake.  In short, if you’ve already staked, particularly if your tokens are still locked (meaning you initially chose a lock-up period that hasn’t yet completed), you must conduct an upgrade transaction to continue earning rewards.  The IIP promises video tutorials on how to conduct this transaction.  If you do not upgrade within the one week transition period, you will stop earning new rewards until you complete the upgrade transaction.  I expect this to happen before April, so watch Discord and Illuvium social media for announcements.

Second, the biggest change from previous discussions is the elimination of the ability to move to a new wallet.  Called “migration,” stakers will not yet be able to move from their original staking wallet without withdrawing and restaking.  For those with large amounts staked and a long term commitment to the DAO, this is likely in their best interest to gain the gas optimization functionality of V2.  Once we experience V2, we will better be able to advise on the impact of the new contracts.  If your stake is still locked, migration was never an option.  The IIP indicates there was “added complexity” to implementing migration, but it may be added in a future “helper contract.”

Always remember to take security seriously, never share your seed phrase and consider using a hardware wallet.  While unfortunate the engineers were not able to include this function, compromised wallets are at no fault to the DAO, and those who are concerned with their wallet’s safety should consider unstaking and moving to a completely new wallet and restaking once their tokens are unlocked.

What does it mean to me?

Right now, staking is paused, and the staking v1 platform shows 0% APY for both core pools.  Rewards are being manually calculated, and these “accumulated rewards” will be given once V2 is implemented.  I added a section to my staking dashboard to provide a rough estimate of what to expect since January 20, and the IIP indicated that a Merkle Tree of accumulated rewards will be published to allow individuals to verify the authenticity of these rewards.  My personal estimate (which neglects staking weight of those unstaking) is that each ILV in the core pool should expect around 0.02 ILV since January 20, while each SLP token should expect around 1.14 ILV, both at weight =1.

In short, the long weight is almost over.  Watch for announcements and be prepared to go to the new Illuvium.io staking interface, upgrade, receive your rewards for the past two months, and resume staking with new improvements.  Action is required by you - you must upgrade to continue receiving rewards.

Thanks for reading and your support!