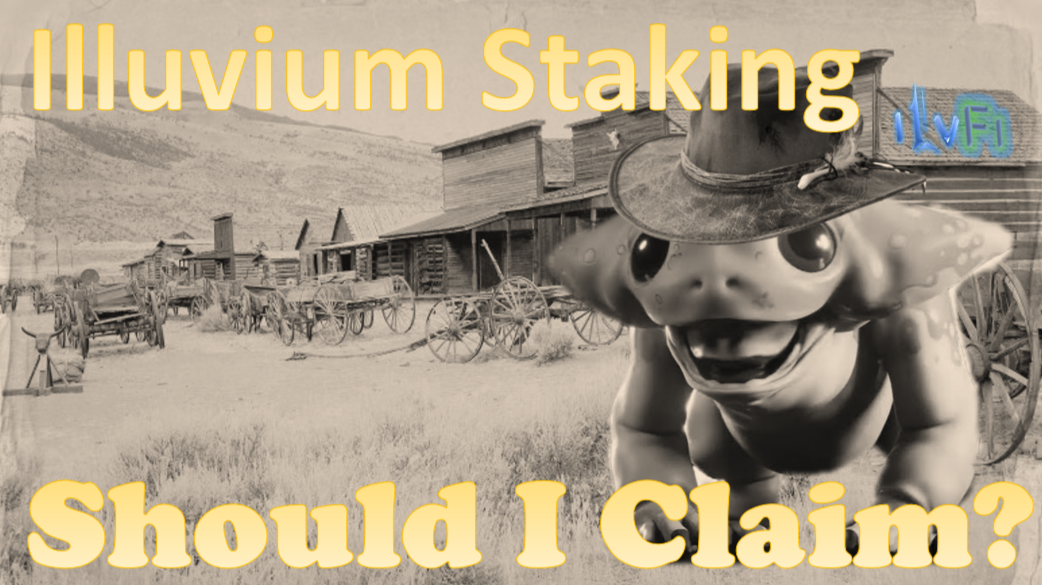 Staking Illuvium - How Often Should I Claim? "Pre-buying" ILV

One of the great debates in staking Illuvium is when should I claim or vest my rewards?  With Illuvium staking, rewards are earned continuously, but there are limitations on these rewards until they are claimed.

The benefits to claiming are:

Obviously, each of these has value, but the dominate two for now are 3 & 4, determining how soon you would be able to access your rewards, and how much they will earn through compounding interest.

Complicating decisions are that each claiming transaction requires Ethereum smart contract interaction and associated gas fees.  Therefore, there is a cost to consider to enable these benefits.  With gas being a variable, transaction fees range from $30+ for ILV pool claiming and $65+ for SLP claiming.  Hopefully Illuvium Staking V2 (see the Governance tab on the Illuvium Discord) will reduce these fees, but until that is implemented, we are left with the decision, to claim or not to claim?

The twelve-month vesting period is a personal decision, as to how soon you’ll want to withdraw your rewards.  Claiming today would enable rewards to be withdrawn in September 2022.  This would be in the middle of the greatest token unlock period.  Since tokens continue to earn rewards and revenue distribution at their locked weigh (2x for all claimed rewards) until they are withdrawn, there may be significant rationale to leave them staked.  Next year at this time, we may be in the midst of stable/dropping ILV price due to expanding circulating volume, with added value from compounding staking rewards and revenue distribution continuing.

That makes our decision entirely based on #4, how much compounding value can you expect?  Much like everything else staking ILV, your future price prediction is the single biggest factor to determine the value of that interest.  Secondarily, the pool growth over time and decreasing interest rates impact the number of reward ILV you can expect.  Both are big unknowns.

So how do I assess if it’s worth claiming?  First, don’t think about it as compounding interest.  Normal compound interest happens automatically and for free, so you always want compounding.  Due to the Ethereum transaction fees, I think of it as paying ETH today for future ILV.  Your "option price" depends on the current gas fee and how many ILV you anticipate in the future.

For example, if you expect your claimed vesting ILV to yield 0.5 ILV in future rewards, and it currently costs you $65 to claim, you’re being given the “opportunity” to buy at $130/ILV ($65/0.5 ILV).  By claiming, you’re essentially trading $65 today for 0.5 ILV in the future.  Since you’re already staking ILV, I’ll presume you think buying at $130 per token is a pretty good deal.

The other wrinkle is whether you should claim today, versus at a point in the future.  First, always watch gas fees!  If we take the above example, and the transaction cost is $160 rather than $65, essentially you’re paying $320 per ILV instead.  That’s still likely a good deal, but much worst than buying at $130.

What about claiming today versus waiting one more week?  Assuming gas costs are the same, the question becomes the number of rewards you are giving up not claiming today.  Let’s say you have 10 unclaimed ILV rewards.  You can claim today for $65, or you can claim one week later for the same transaction fee.  Over the course of a year, you predict that 10 ILV will yield you an additional 2.765 ILV in interest.  However, what you’ll be giving up is the expected compounding return of 7 days earning rewards on 10 ILV.  As of today, each ILV in the ILV core pool at 2x weight is earning 0.00195 ILV.  At 10 ILV for 7 days (neglecting pool growth), you’re “losing” 0.137 ILV (10 ILV x 0.00195 reward ILV/day x 7 days).  Claiming next week, you would then begin the vesting and compounding process, so the only difference would be this “missing” 0.13 ILV you gave up this week.

If you look at this over the full year, you get something that looks more like the various claiming scenarios in my ILV staking calculator.  For each scenario, there is an estimated number of ILV you’ll receive as rewards, and a predicted gas fee that it will cost you to “pre-buy” those ILV.  The difference between each scenario is realistically the small gap periods like the example above where you had the opportunity earn rewards, but chose not to in order to reduce transaction fees.  Let’s look at how impactful that really is over time. 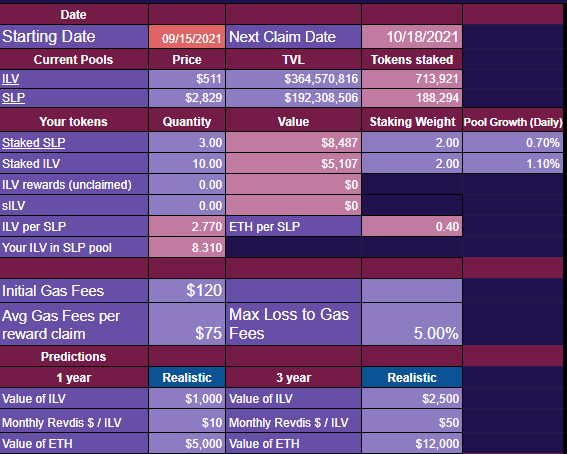 I’ll focus only on the 1-year estimate, as we are trying to understand the impact of claim timing.  The further out we project, the less likely our current predictions will hold true due to changing staking conditions (pool population).  I do have reasonable confidence for impact of claim timing in the short term.  Should a major event happen in crypto (e.g. major market “correction”), or in Illuvium (e.g. gameplay trailer release), the current growth projections may be way off.  For that reason, I recommend revisiting the calculator on occasion to see how pool population has changed expected rewards to reevaluate your strategy.

In the claim scenarios, I go through the following progression when assessing an investment.

Initially, I look at the final column – Not Staked.  The number in the “Total Value – Fees” cell shows the value at your projected value if you held these tokens but never staked.  I compare this to the same cell in the Never Claim scenario.  In this scenario, you stake, but never do a claim transaction.  In this case, Not Staked tells me $23,937, while Never Claim gives me $67,180, so based on these inputs, it is definitely worth staking. 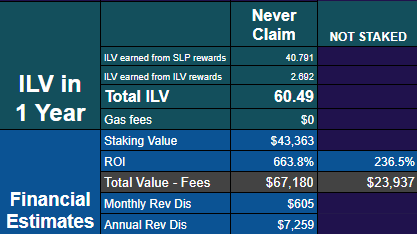 Now, I look at this "never claim" value, and scan across different claim timing/strategies.  In the next column, claim monthly, I see that the expected value is greater, which tells me it’s likely mathematically appropriate to claim at some point, now it’s just a question of how often and with what frequency. 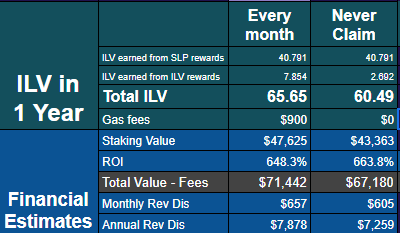 My next point of comparison becomes the “Every day” scenario.  While almost certainly wrong for all but the biggest whales, this gives me a theoretical maximum number of rewards I can expect.  You’ll see that gas fees become significant, with over $26k spent in a year claiming this way, bringing my “Total Value – fees” down to $46k, a loss of over $25k versus the claiming monthly strategy.  However, I want to assess the impact of these added transaction fees.

Just like our example above of waiting a week to claim 10 ILV, the “lost” reward ILV come at a cost of gas.  In the case of claiming daily, you never “lose” ILV, but you definitely pay for that “benefit.”  I look at the Total ILV row, seeing that after a year claiming daily, I predict I would have 66.37 ILV, while claiming monthly I would have 65.65 ILV.  This means by delaying claiming, I’m “losing” 0.72 ILV.  To gain this added amount, I need to pay $27k in gas fees.  Applying the “claim daily” strategy values this final 0.72 ILV at over $37,000 per ILV ($27k/0.72 ILV).  I’m essentially pre-buying 0.72 ILV for $27k by claiming daily.  I don’t see anyone who thinks that is a good idea.  You would be much better off taking those planned gas fees and just buying ILV on the open market.

Due to the declining nature of the yield farming structure, fixed time period scenarios are unlikely to be the best strategy.  As rewards are greater now than they are ever likely to be in the next three years, claiming more frequently today makes more sense, and as time goes on, your claim frequency should decrease.  The calculator currently offers a “Claim every X ILV” strategy to reflect this likely slow-down in earning rate.  The core of this approach is to wait for your unclaimed rewards to be greater than a certain available ILV threshold, and then claim.  As daily rewards decrease, more time will pass before you reach your target ILV level.

For this example, we have this set to claim every 10, 5, and 15 available ILV (you can adjust this by changing the values in L2-N2).  The lower the number of rewards, the more frequently you will claim.  This means claiming every 5 ILV will require more transactions than claiming every 10 ILV.  But how much are these extra claims generating? 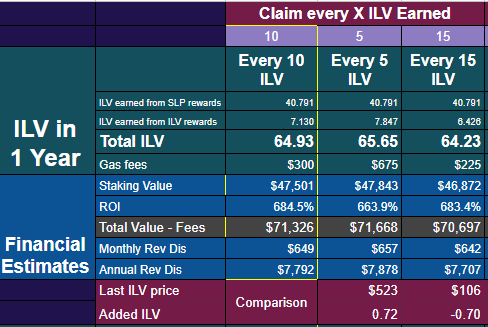 I then continue to adjust these numbers, likely moving 5 to the yellow box as my point of comparison, and then try number around 5 to see how it looks.  Let’s try “every 7” and “every 3 ILV” strategies.  In this case, you lose 0.30 ILV by waiting for every 7 ILV rewards, and gain 0.29 ILV by claiming every 3 ILV.  Looking at the “Last ILV Price” row, we know the 0.29 ILV we gain by going from every 7 to every 5 will cost us $750 per ILV.  We’re “out of the money” now, meaning we’re paying more today for future ILV, but that may be worth it to us depending on where we think ILV price will be in the future.  For every 3 ILV, the last 0.29 ILV cost us over $1500 per token, so a much higher price than I predict in the next year, so I would rather take that money and invest it elsewhere, or just buy ILV directly today. 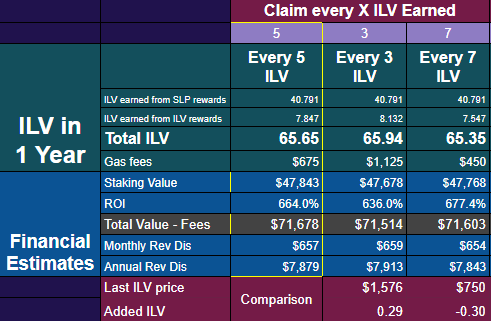 I recommend trying different claim frequency scenarios and assessing your predicted gained/lost ILV, and the associated fees for which you’re buying these final units.  To me, this is a more realistic way to think about transaction fees and what they really mean to our investment.  Also consider adjusting the predicted ILV price to more bearish scenarios, or adjusting the pool growth rates as these are the two biggest unknowns that significantly impact ILV investment value.

What do you think?  What is your personal claim strategy?  Thanks for reading and for your support!

Disclaimer:  This article is for educational and entertainment purposes only and is not financial advice.  Please consider any investment carefully and do your own research.