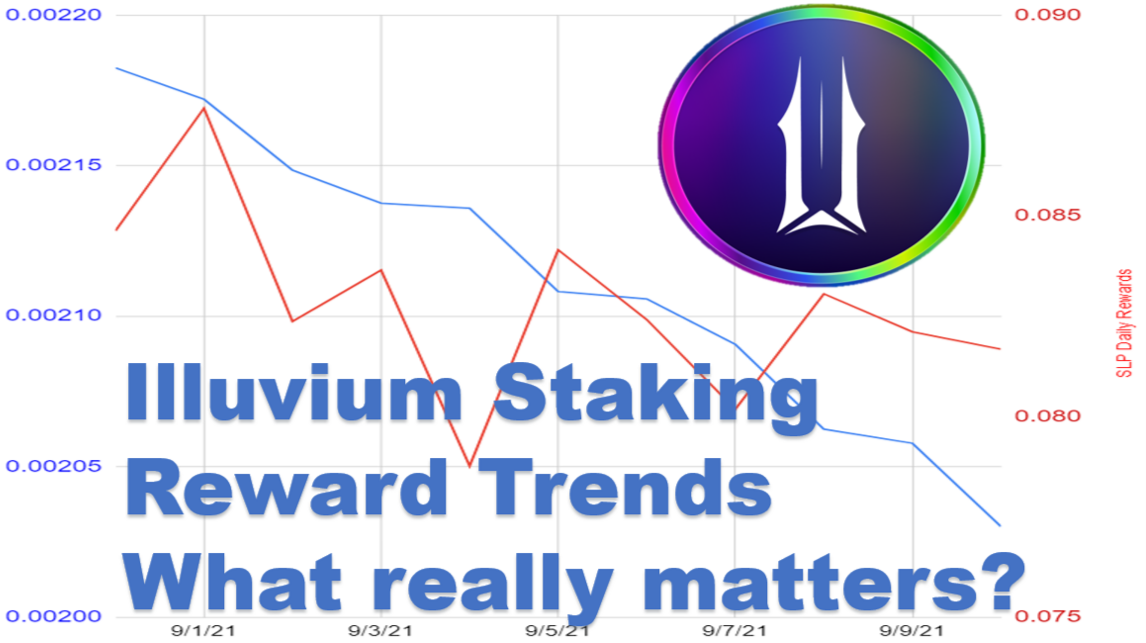 If you’re staking with Illuvium, you predominately care most about the number of ILV received.  Most likely, you were drawn to this blockchain gaming, play-to-earn project for two reasons; the promise of creating the first AAA-grade game in a sea of mediocre competition, and the listed APY on their website.  Other videos and articles have hyped the rewards return rate and proposed game play.  Hopefully, in doing your own research, you continue to understand the project and the real projected returns of this investment before jumping in.

Today, I’ll add a new tool in your assessment arsenal.  I’ve already shared staking calculators, where you can input the current staking conditions, and use our model to project potential return.  The limitations of these models are the factors out of our control.  The two biggest unknowns impacting the long-term return on your Illuvium investment are the future token price and the projected growth of the pools.  In my recent article on the limitations of APY as a valuation metric for crypto projects, we discussed how staking pools work, particularly the ILV and Sushi Liquidity pools for Illuvium.  Briefly, each day has a set number of rewards that are distributed to each pool.  Your expected number of rewards received are based on how many tokens are staked in each pool and the weight of each token.  My analogy for this is to think of the pools like a pitcher of water and a number of glasses.  The pitcher is filled with a fixed amount of water (reward ILV), and the water is poured out equally into each cup present (the number of staked tokens).  Every two weeks, the amount of water available in the pitcher is reduced by 3%, and based on people entering and exiting the pools, the number of “cups” changes.

In my new sheet, I show each of these factors with daily updates.  The key output for staking Illuvium is how many ILV rewards we receive each day.  I’ll briefly review the content of the sheet and how to use it to update your expectations on staking with Illuvium.

On the Dashboard tab, you'll find the most important factor; the daily expected ILV rewards from each of the core pools.  I represent it in two numbers – expected daily return for 2x staking weight, and 1x staking weight.  The 2x weight is shown as this is a common approach to these pools, with nearly 20% of all ILV staked, and almost 50% of SLP staked locked for a period of 52 weeks.  In addition, all claimed rewards are automatically staked in the ILV pool for 12 months while they vest, earning rewards at the 2x weight.  The other most common “lock-up” timing is flexible staking earning at 1x staking weight.  Currently a little over 20% of the SLP is staked flexible, and almost 56% of the ILV pool is staked without a lock up period.  If you selected a lock-up period in between, you can merely multiply the 1x weight number by your weight to predict your expected ILV rewards earned today.

The Rewards Graph & Change over Time

This data over time is plotted as a graph in the “Rewards over Time” tab.  In the chart, I show the rewards earned per day (at 2x staking weight) over time for the two core pools.  This is a visual representation of changing APY over time, but with the distraction of token pricing removed from the SLP data. 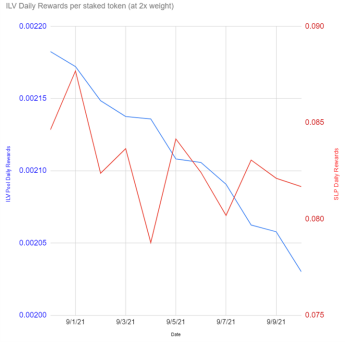 At the time of sharing this, the SLP has largely stabilized in rewards per day, and has settled around 0.082 ILV per day per staked SLP.  This follows a long period of declining rewards due to rapid growth in the pool, as the number of “cups” in the pool increased over 30% in the past month.  This growth rate is listed in the Dashboard tab in the Pool Growth section, showing the recent change (daily, weekly, fortnightly, and monthly) in number of staked tokens.  These values neglect staking weight, though the number of Daily Rewards and the graph incorporate the weighting impact.

Discussing the ILV pool, we see a relatively consistent decline in rewards.  Like the SLP trend, the staking rate has stabilized.  For more than the past two weeks, the rate of ILV staking has actually shifted negative.  However, since ILV claimed from all staking pools are added to the ILV pool, the overall pool growth rate remains positive.  This is reflected in the relatively constant negative slope in the daily rewards earned from the ILV pool.

Holistically looking at Illuvium yield farming, there is a section of the dashboard dedicated to showing where we are in the overall distribution of 3 million ILV.  These values look at the total number of earned and claimed staking rewards.  The maximum number here is 3 million, so as of September 10, we are about 16% of the way through yield farming from a total rewards perspective, though more than 2.5 years remain in the process.  The next row shows the total number of rewards claimed, meaning the difference between Issued and Claimed are the pending rewards that could be claimed at any point.  This value shows the number of ILV that may soon enter the ILV pool, and also the current number of rewards that could be claimed as sILV. 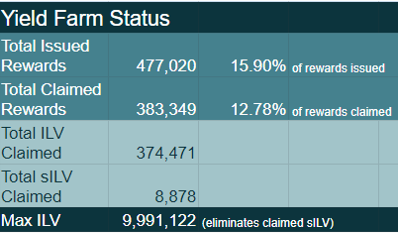 sILV is a reward for staking that can be claimed in place of ILV.  The primary benefit of sILV is that they enable stakers to receive their rewards immediately, avoiding the 12-month vesting period of ILV.  However, these sILV rewards are only to be used in place of ETH for in-game purchases.  The land auction (anticipated for November, exact date TBD) is a major event that may shift these rewards towards sILV.  So far, just under 9,000 sILV have been claimed, but nearly 100,000 pending rewards have the potential to be claimed in this manner.  I doubt the majority of these will be claimed as such, but this is the potential scale.  For long term ILV bulls, each claimed sILV will eliminate an ILV from ever being minted.  As the upper limit of ILV is 10 million, the more sILV that are claimed, the fewer the long-term tokens that will exist.  For each ILV holder, this is beneficial as it reduces the number of tokens eligible for long term revenue distribution.  The Max ILV line shows the current max ILV, subtracting the claimed sILV from the 10 million total.

Reminder, if your intent is to claim sILV, I strongly encourage you to claim right before you plan to use the sILV.  Note that each time you claim, you have to select either sILV or ILV, so if you want a divided amount of both tokens, you will need to do so over multiple claiming transactions.  For sILV, there is no value from revenue distribution or compounding staking rewards, so to minimize gas, only claim once!

If you want to nerd out further, I’ve included the raw data generating the dashboard.  The ILV and SLP tabs look at claim data over time and the growth trends.  The “3pct” tab shows the daily expected rewards reflecting the fortnightly 3% decrease if you want to see this decrease in action over the next three years.  The Claims tab show how daily claims have trended, both with ILV and sILV.  Lastly, is the “Return” tab that shows how absolute pool value, APY, and daily expected rewards have changed over time.

How I Use This Data & Forward Thinking

Obviously, I love data.  When I look at this spreadsheet, I focus on the daily expected ILV rewards, and multiply by my current staked tokens to anticipate how my rewards are growing and how the rate is changing over time.  As I continue to project my long-term rewards, it’s helpful to see how these rewards are trending, and how pool growth rates shift.  As the bulk of my rewards come from the SLP, seeing this trend stabilize is a very positive thing to me.  Right now feels like a quiet time in Illuvium news, coupled with a broader crypto market pull back and continued high gas prices, that is reflected with significantly lower volumes in staking changes.  I'm perfectly fine with that!

When I look at the decline in ILV pool rewards, I leverage this to think about the value of claiming.  As the ILV pool reward rate drops, so does the value of claiming and spending gas on that transaction.  If the amount of rewards earned from my claimed ILV is unlikely to exceed the value of transaction gas, I shouldn’t claim.  I’ll direct you over to my other calculator to see how gas relates to ILV earnings.  As the ILV trendline slopes downward, I should wait longer between claim transactions.  For those of you with low investments and seeing the current high gas prices, you should really evaluate if its ever worth claiming.

Let me know what you think about this sheet, and what else you focus on in this information.  Thanks as always for reading and supporting my work!