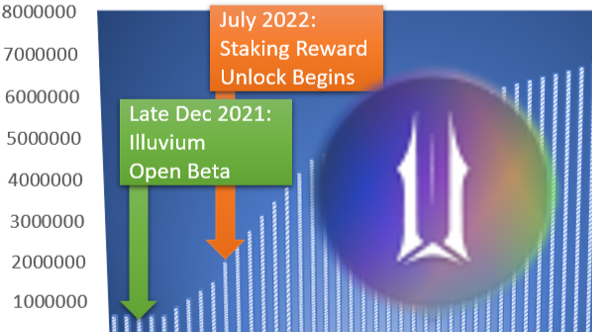 UPDATED 8/24/2021:  An earlier version had an incorrect table on the distribution of tokens, indicating team and seed tokens at 1.6 million and treasury at 2.1 million.  It has been updated to reflect 2.1 million seed/pre-seed and team tokens, and 1.9 million treasury tokens.  All unlock analysis was correct.  Apologies!

Illuvium has been on quite a run in the past several months.  From just over $30/token in late June to an all time high of $563 mid August, the upcoming Play-to-earn game (without a playable game yet) has been on quite a tear, up over 15x in about two months.

Around the time of the all-time high, Kieran Warwick (Illuvium founder) shared that in addition to the planned 12 month lock for both Team and seed tokens, “upper management” would vest their tokens over an additional 24 months, hoping to drive significantly more confidence in the project and the development team's commitment.

I’ve confirmed with Kieran’s brother, co-founder and the lead game designer, Aaron Warwick that this amount is approximately 14% of the total supply, totaling about 1.4 million tokens of the maximum possible 10 million ILV.  Today, I’ll share the full unlock schedule and the connection with the project timeline, and key dates to watch for token price action.

I covered tokenomics earlier here, but to briefly recap, the current circulating supply is 634,834 tokens, which came largely from the launchpad sale on Balancer.  The original intent of this event was to sell 1 million tokens, however, around 600,000 were sold in this fashion, with the remaining tokens placed back in the treasury, under custody of the DAO.  The rest of the maximum possible 10 million tokens remain in custody of the treasury, locked under a vesting schedule (Pre-Seed, Seed & Team tokens), or are yet to be distributed, either being locked in the staking rewards protocol or set aside for future in-game or tournament rewards. 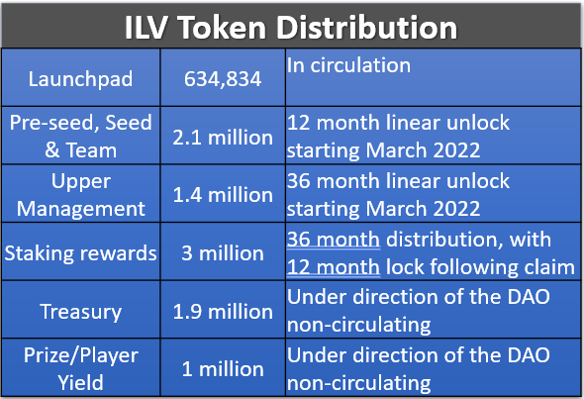 From my staking reviews, you know that 3 million tokens are being distributed over the next three years to those staking in the core pools (ILV or the Sushi liquidity pool), or promotional “Flash” pools (short two week pools involving the staking of another token to drive connection to relevant crypto communities).  An additional 1 million tokens remain earmarked for in-game rewards, including the prize pool for proposed e-sports tournaments.

Tokenomics are a critical aspect to valuing cryptocurrency projects.  While the current market cap of Illuvium sits just over $300 million, at a fully diluted valuation, that equates to a little under $5 billion.  Major unlock of tokens present opportunities for selling pressure as early investors and token holders get their opportunity to cash in on gains watched while waiting for their tokens to become liquid.  For ILV, the first major unlock event will occur in March 2022, when the Team, Seed, and Upper Management tokens will begin their unlock.  At that point, an additional ~214k tokens will be unlocked each month for the next year.  Initially, the pressure will be greater, with circulating tokens jumping over 33% in March 2022 from the current 634k up to 848k.  Each month another 200,000+ tokens will find their way to the market, with decreasing impact over time on a percentage basis. 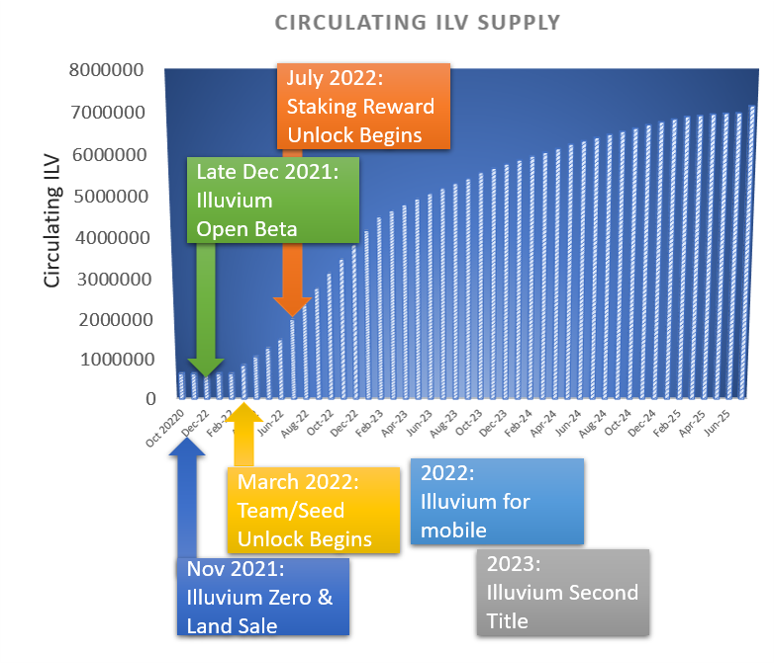 Adding to the selling pressure will be the unlock of staking rewards, which will occur beginning in July 2022 for those who claimed their rewards within the first month of staking.  Given my interactions with the community, I anticipate a large number of each month’s distribution to unlock about one year from its issuance.  Staking rewards began with 100k tokens distributed in the first two weeks, beginning at the end of June 2021.  The number of rewards decreased by 3% every two weeks thereafter.  This gives us our second major unlock date of July 2022, when the number of circulating tokens will increase from just under 1.5 million in June 2022 to nearly 2 million by the end of July 2022, an increase of over 25%.

The majority of major unlock events conclude by March 2023, when we can expect around 4.5 million ILV to be in circulation.  At that point, the monthly dilution will decrease to around 3%, and will last through mid 2025, when all staking rewards are likely to become unlocked or claimed as sILV.

The wild card are the tokens controlled by the DAO, both the primary treasury of the organization as well as the prize fund.  I expect the DAO to closely hold the majority of these tokens long term to benefit from revenue distribution, which will further solidify the financial position of the organization.  This stake will include over 3 million remaining tokens.  By the end of 2024, this will represent nearly 30% of total ILV.  At that point, we will also know the number of staking rewards that were claimed as sILV.  The sILV is a synthetic ILV offered as an option to staking players who choose to claim their rewards as in-game currency rather than the ILV governance token.  The maximum possible number of sILV to be claimed is 3 million, though I expect that number to be far lower, potentially 1 million or less, meaning the final fully diluted number of ILV will be between 9 to 9.5 million ILV.

The opposing force to the selling pressure will be revenue distribution.  The DAO plans to distribute 100% of all revenue back to staking token holders.  This has two positive pressures on the price of ILV.  First, it incentivizes ILV holders to stake in the protocol to gain eligibility to receive these revenue distributions.  Secondly, the revenue will be paid out in ILV purchased from the open market.  We will first see the impact of revenue distribution in November with the initial land sale.  At that point, revenue distribution eligible tokens will likely number between 7-8 million.  While only 634k ILV will be in circulation, staked tokens, claimed staking rewards, Team and Seed tokens, as well as tokens held by the treasury (including the prize fund), would be eligible to receive this distribution.  Early estimates indicate that the land sale could raise up to $100 million, which would mean a distribution of around $13 per ILV.  It should be noted that token weighting will increase the effective number of ILV into the 12-15 million range, setting a real revenue distribution around $7/ILV.  These are my estimates and are not confirmed by the Illuvium team.

Both the Illuvium Zero mobile mini game and the main Illuvium title plan to launch prior to the March 2022 unlock.  Therefore, token holders will have an early estimate for the success of the project and the potential value of staking the tokens thanks to revenue distribution prior to any major selling events.

The major increase in circulating ILV will occur between March 2022 and February 2023, with the number of circulating tokens growing from just over 600,000 to nearly 4.5 million in a year, and increase of over 700%.  However, I continue to be incredibly impressed by the team for their transparency and apparent commitment to the project.  I applaud the upper management for reinforcing this publicly by extending their token lock-up period.  Long term, I believe revenue distribution will be the primary driver of the ILV token price and the value of the project.  With that in mind, the extended lock-up by the management team isn’t that much of a sacrifice, but it does speak to their commitment to this potentially groundbreaking project seeking to reinvent mainstream gaming with blockchain technology, jumping into the current trend of play-to-earn and NFT collection.

Disclosure: I am long ILV.  This article is for education and entertainment only, and should not be used as financial advice. 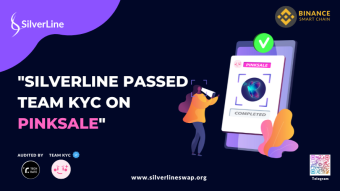