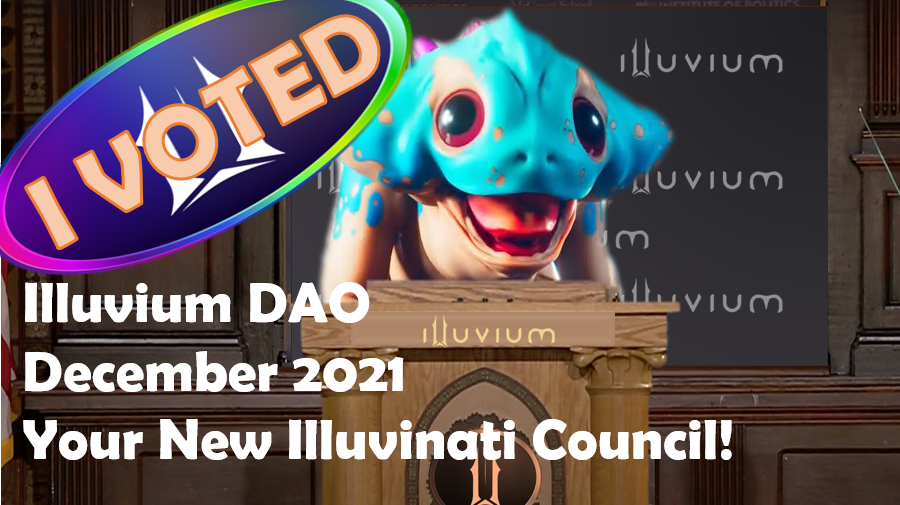 The council to round out the first year of the Illuvium DAO has been chosen by the community!  Overall, we have three incumbents holding their spot, one former council member returning, and one new but not so new face.  Before diving into the results, I want to give a huge thank you to the community for engaging in this election.  As I’ll share below, turnout was much greater than September (139% voter turnout growth), and due to quadratic voting, power continued to progress to smaller wallets.  While the race became quite competitive for the top 6, ultimately, the desired candidates across the community were chosen, with a grassroots campaign from Vetemor coming very close to earning a seat, receiving more wallets voting for him compared to everyone except Kieran!

Before diving into analysis and results, I do want to acknowledge my experience running for a council seat.  If you’re reading this, you likely know my work and community involvement, and I just want to say thank you to those of you who chose me as their candidate.  Before votes started shifting (including the shift of my vote and endorsement of Vetemor), I saw support from 60+ individuals, which was incredibly validating to my Illuvium contributions.

While I was not successful in earning a seat, I was humbled by the support that I received and inspired to continue doing what I can to educate and energize the Illuvium community in my own way.  I intend to remain an independent voice and advocate for a project that I’m very passionate about.  I am open to help any of you, and hope to be a resource to all members of Illuvium, from council members, content creators, and those just discovering the project.  With that, I hope the rest of this article is as impartial as possible to help my readers understand the results and trends from this election.

After much back and forth over the 72 hours of the election, we saw 8 different candidates shifting around the top five, though in the end, those chosen by the community to represent them for the next three months are the following: 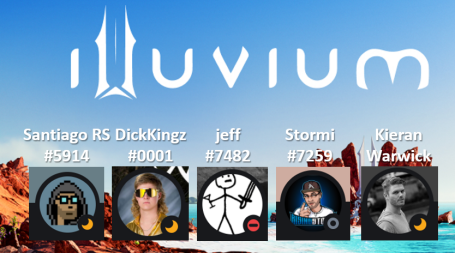 I shared candidate statements previously, though I’d also point you to this interview  with Kieran and Vetemor to understand Santiago and DickKingz's impact on Illuvium.  While the other three are likely well known to the Discord community, the value of the other two may be lost if that is your only interaction with Illuvium.  Per Kieran, Santiago has been a critical advisor to him, and DickKingz has been essential to engaging and listening to those connecting through Telegram.

While there has been debate on candidates and certainly will continue to be discussions on the role, number, and background of council members, we ended with diverse representation under the current structure of five Illuvinati members at a critical time to guide the project towards the first major events, including the land sale, Illuvium Zero launch, and closed beta of the main Illuvium title.

Overall, eighteen candidates completed all of the steps necessary to be on the ballot, and everyone received at least three wallets voting for them.  The runner up this time was Illuvium YouTube content creator Vetemor (2016 vILV), who just missed a council seat by less than 2% of the vote.  There was some separation between sixth and 7th/8th places, held by incumbent council member Rahlord (448 vILV), and me at eighth place (314 vILV), though both Rahlord and I saw some late shifting support move to candidates in the top six.  In ninth place was newer YouTube content creator and Discord participant iluanor.eth with 35 wallets and 113 vILV voting for him.  Tenth through Eighteen received a total of 66 wallet votes totaling 219 vILV. 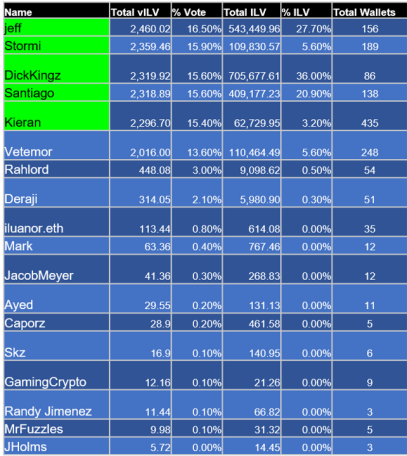 The most exciting aspect of this election to me was the increased community participation, further showing both engagement and decentralization with a shift to greater voting power from smaller wallets.  The total number of wallets participating increased from 611 to 1458, a gain of 139%!  The number of vILV votes more than doubled as well, while the number of ILV represented increased by 61% to over 2.4 million.

More telling was the shift of how these votes were distributed.  In September, wallets over 1000 ILV cast more than 75% of the vote, with this number decreasing to 54% this election.  The biggest drop in voting power was for wallets over 7500 ILV, decreasing by 7.4% of the total votes since the last election. 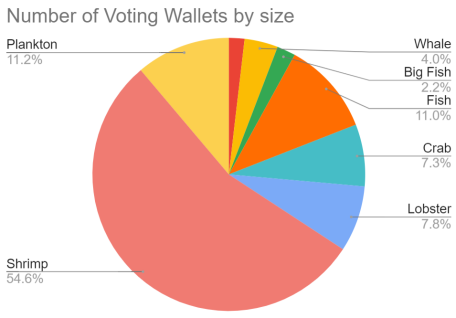 From the perspective of voting power, Leviathans still represented the largest block of votes with 35.6% of the vILV cast, though wallets under 500 ILV cast a total of 40.3%, outvoting Leviathans, while representing only 2.6% of the total held ILV, compared to 88.8% held in wallets over 7500 ILV. 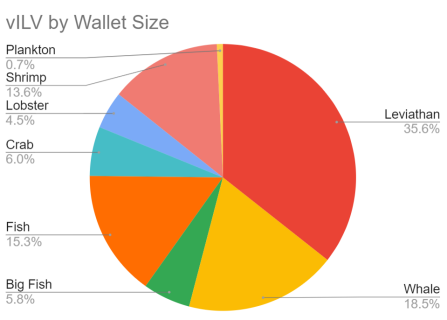 But were Leviathans enough to carry the election for any candidate?

Whales Alone Is Not Enough!

Last election saw Anton Bukov receive enough votes from only two wallets to gain a council seat.  Due to the increased voter turnout this time and quadratic voting, no candidate earned a seat from Leviathans alone, and only counting wallets over 1000 ILV was not enough to get any candidate automatically elected.  With Vetemor in sixth place, 2016 vILV was the magic number to become a council member.  Here’s how the votes looked just considering wallets over 1000 ILV. 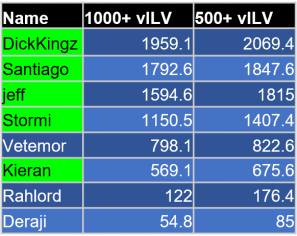 While DickKingz and Santiago came close, with 7 and 8 Leviathan supporters, respectively, these votes only brought them to 1608 and 1570 vILV.  Expanding to all whales, DickKingz was still 57 votes shy of the needed level to be elected.  In fact, expanding to wallets of 500+ ILV, only DickKingz earned a council spot without needing support from smaller holders.  With that, let’s look how each candidate did by wallet size demographic.

Kings of the Seafood Buffet - Winners By Wallet Size

From the above table, you can see aside from Rahlord placing 5th with Lobster (with 54 vILV from this group), no one outside of the elected candidates and Vetemor finished in the top 5 in any wallet size.  Stormi and jeff were in the top five in every voting block.  Only DickKingz and Santiago dropped out of the top 7 for any block, with DickKingz ranking 8th among Fish, and Santiago 8th among Lobster.  So, realistically, the only candidate that could have won would have been Vetemor.

It's fun (to me at least) that on the same day they released the “Vetcast” interview between the two of them that they finished fifth and sixth for council.  Comparing the two, Kieran led Vetemor in every voting block except Crabs and Leviathans.  Vetemor led Kieran by 20 vILV amongst Crab, and 419 vILV with Leviathans.  Kieran won his spot with volume, topping Vetemor by 720 vILV across non-Leviathans and Crabs, leading 435 wallets to Vetemor’s 248 voters.

If we completely ignore vILV and ILV, here’s how voting went by number of wallets. 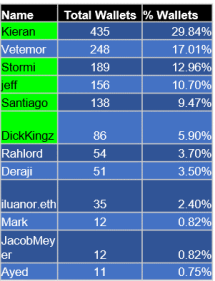 Kieran led everyone with nearly 30% of the wallets participating, giving him 2297 vILV.  Vetemor received his 2016 vILV from 248 unique wallets.  Stormi, jeff, and Santiago all received over 100 wallets.  Santiago became the first person to receive over 100 wallet votes in consecutive elections.  Rahlord also received 100 wallets in September, but fell to 54 wallets in December (after votes were transferred in the final 24 hours).  DickKingz jumped from 37 wallets in September to 86 in December, including 13 wallets containing over 700,000 ILV total.  Again, there is a clear distinction separating the top 6 candidates from the field.

While voting is quadratic, it is interesting to see how raw ILV were distributed among candidates.  Here is where DickKingz truly stood out, largely thanks to support from the top wallet containing 551k ILV.  In total, DickKingz supporters held 705k ILV. 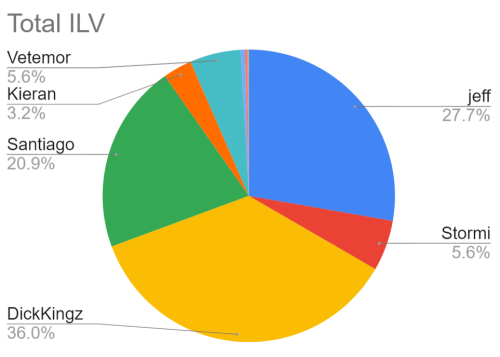 Jeff was second with 27.7% of the represented ILV (543k), with Santiago next at 409k ILV.  The final two council members had much more distributed votes, with Stormi at just under 110k ILV.  Vetemor was actually fourth in ILV at just over 110k, largely thanks to support from one Leviathan wallet containing 92k ILV alone.  Kieran brought up the rear of the top 6 at a little under 63k ILV.  The top six were separated from the field, with Rahlord coming in at 9k ILV, and me at just under 6k.  The remaining ten candidates shared support from 2.5k ILV.

While over 15,000 wallets were eligible to vote, I’m pleased that the community came out with nearly 10% voter turnout.  As we progress as a DAO, turnout and engagement is a great metric to focus on, showing the path to further decentralization even before any product has launched.  Please join me in congratulating the winners and thank the other candidates for their interest in participating in the election.  Keep the conversations progressive, sharing ideas to drive further improvement while we look forward to some very exciting events in the next few months.

I hope you enjoyed my breakdown of the December Illuvium election, thanks to those who supported my candidacy, thanks to everyone who voted, and thanks to my Patreons for enabling me to take time to write articles like this that hopefully are beneficial to the Illuvium community!

If you'd like to review the data further, my analysis is available here, with data downloaded directly from Snapshot here. 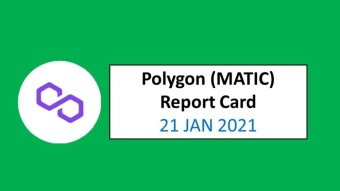