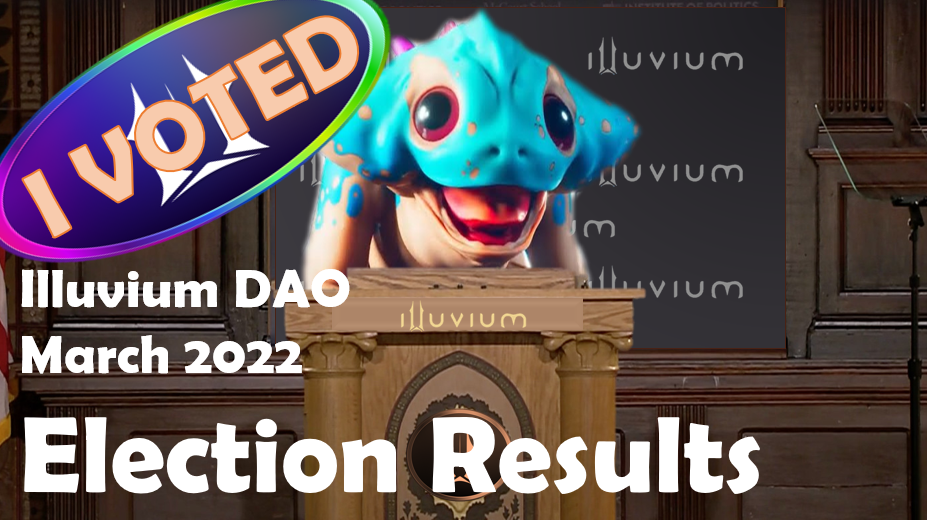 Over the past three days, the Illuvium DAO held their quarterly election of their leadership, the Illuvinati council.  Here’s my summary of the results and a call to action for the community (and leadership).  For the complete data, feel free to check out my sheet here.

Overall, the ILV token holders selected two council members to retain their seat, one previous council member to return, and two newcomers to the council, but not new faces if you follow Illuvium content on YouTube.  With Stormi (Sascha), and jeff not running this epoch, and DickKingz taking over the critical role of community manager, this opened up three seats.  The remaining two council members, Kieran Warwick (co-founder), and Santiago retained their spots, finishing first and second in vILV votes.  Rahlord regained his spot after finishing seventh last epoch, finishing in the fifth spot this time.  The two new council members are Volkin and Vetemor, commonly known YouTube content creators for the project, finishing a very close third and fourth respectively.  Vetemor earned a spot on the council for the first time after finishing a close sixth place in December, and Volkin earned his seat in his first attempt at council. 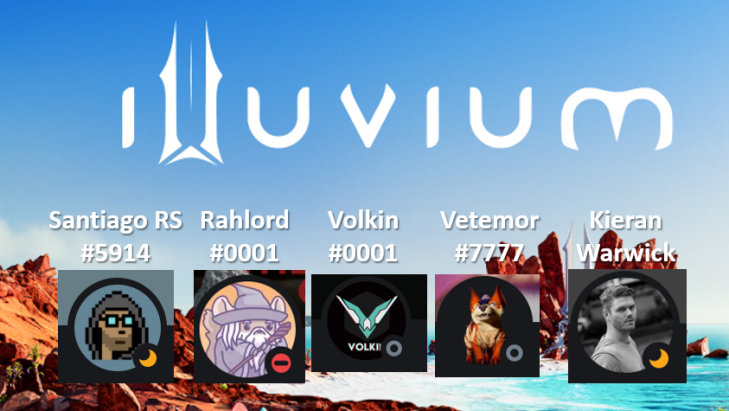 Overall, this was only a six horse race from start to finish, though a significant amount of voting occurred in the final eight hours of the election, giving Volkin the edge over sixth place sheep, who was consistently in the top five for most of the three day voting period. 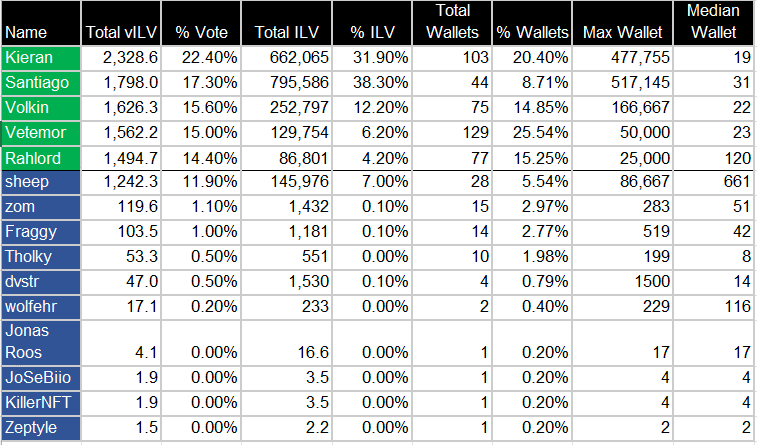 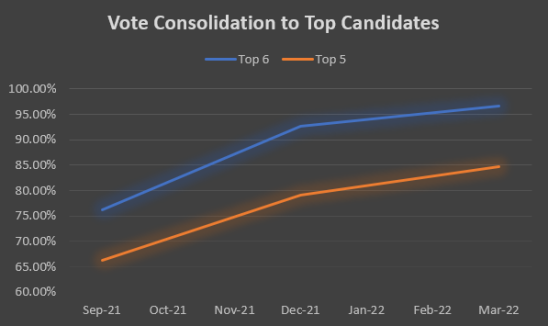 My hypotheses around this consolidation are several fold.  First, only several candidates were well known to the community.  There were several familiar names further down the list, but the bulk of the notoriety was in the top six.  Also, engagement was down significantly this epoch, so more of the votes came from larger holders.

With such consolidation at the top, there is little argument this time to be made around the five winners.  While sheep was close and actually led all candidates in votes from whale wallets (1000-7500 ILV), they finished fifth or worse with all other demographics.

When considering by number of wallets, Vetemor led the way after finishing second in wallets to Kieran in December, as they flipped positions with Vetemor taking 25.5% of all wallets and Kieran at 20.4% of all wallets.  The five winners finished in the top five by number of voting wallets, with sheep in sixth. 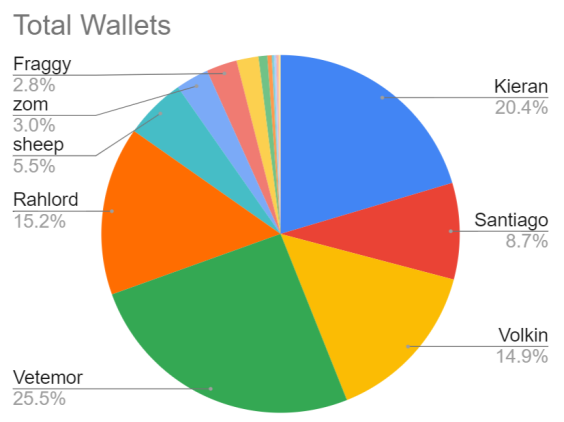 When eliminating quadratic voting (i.e. number of votes, vILV is equal to the square root of number of ILV held), things do switch slightly, with Santiago coming in first thanks to receiving votes from two of the biggest three wallets (517k and 223k ILV, respectively), and sheep finishing in fourth by total ILV.  Vetemor and Rahlord were fifth and sixth by this metric.  The other 14 candidates received a total of 0.2% of the ILV participating. 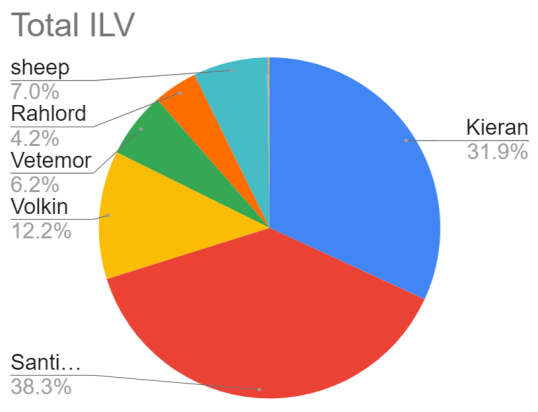 The biggest story of this election was the significant decrease in community engagement.  This has been a challenging several months for the project and crypto in general, and voter turnout reflected this.  Overall, voter turnout was down 65% since December, though this impact was disproportionate with smaller wallets.

In December, there were a total of 1458 wallets voting, up from 611 in September.  This election saw only 505 wallets vote.  Breaking down the impact by wallet size, all sizes saw a decrease, though for all holders less than 100 ILV, the drop was over 50% from December, with Shrimp wallets (1-25 ILV) falling 72%, and plankton wallets (<1 ILV) falling over 90%.  As a result, leviathans (>7500 ILV) cast nearly 50% of the votes, which was up from 35.6% of the votes in December.  Holders of over 1000 ILV cast almost 70% of the votes this time, up from 54% in December.  Due to vote consolidation in the top 6, the five winners with wallets under 500 ILV reflect the broader decision, but it is a challenge for long term governance participation if community engagement remains at this level. 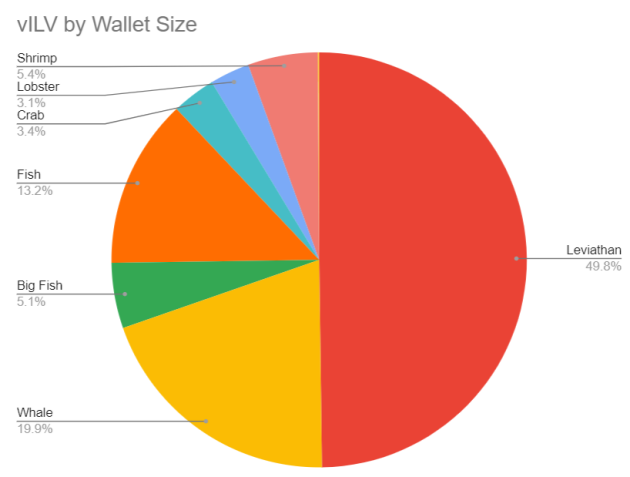 With the goal of true decentralization, participation and engagement in the community is critical.  Hopefully with DickKingz taking on his new role as Community Manager and the planned events of this epoch including Staking V2, land sale, Illuvitar sale, and the main game closed beta launch, the community can come back to greater governance participation in June.

Thanks for reading and hopefully you were one of the 505 wallets to vote in this election.  Mark your calendars and follow Illuvium Discord announcements and the illuvium.io site for future events.

Best of luck to the new Illuvinati council at this critical time for the project. 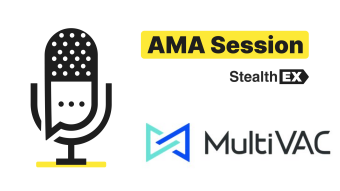