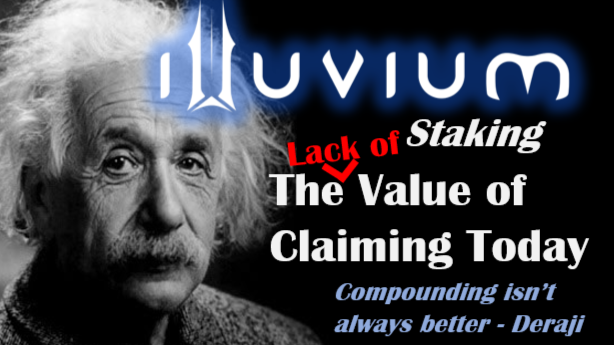 IIlluvium Staking - The Value of Claiming

In my recent state of staking, I highlighted that following the staking v2 conversion, a significant amount of rewards were claimed as ILV, causing the pool volume to jump by nearly 40% in the course of a few weeks, dropping the officially reported APR to around 20%.  I strongly believe that claimed ILV will be the driving force for core pool growth over the next few months, potentially further compounded by unlocked seed and team tokens migrating to the pool.  Combined with the current lack of revenue generation, these factors significantly decrease the value of claiming rewards.  First, I'll share the reasons to claim and what APR and APY have to do with value, and I’ll take a look at what this means to existing stakers. Lastly, I'll share my analysis on the value of claiming.  Spoiler: you should be claiming way less frequently than you are, particularly for smaller stakers.

I'm sharing the preview here on Publish0x.  The full version of this article is available over at The Infoluvial.  Check it out here!

For the vast majority of those staking Illuvium, claiming lacks much value until something significant changes, such as the start of revenue distribution.  While the new staking V2 dashboard shows both APR and APY, please use those with caution, as APR is deceptive, ignoring the impact of pool growth and 3% fortnightly rewards decay, and APY is deceptive as it ignores the transaction cost of staking.  Consider using my dashboard to understand what you’re really giving up not claiming, and look for another article soon updating my model for pool growth and calculator for rewards expected by yield farming over time.

Thanks as always for reading, and feel free to support my individual work here!