Hello all.  Thanks for checking out my latest Illuvium staking calculator updates.  I appreciate all of the feedback from readers here and the Illuvium Discord channel, and did my best to add a few of them, with more coming over time.  As always, this is for entertainment and education only, with my biggest goal being to help people gain a realistic estimate on future value of Illuvium based on their price predictions.

My other main goal is to help those interested in investing in Illuvium, particularly those with a relatively small amount of money, better understand the impact of Ethereum gas fees on your investment.  In general, the smaller your investment, the more impactful gas will be on your return.  Even at a higher stake, I encourage you to wait for low gas fees.  Gasnow.org features a chart at the bottom that shows average hourly gas fees for the past week.  As a general trend, business hours (Monday-Friday, UTC 12 PM to 9 PM) tend to be the worst times for Ethereum transactions, with Friday nights and early Sunday morning in the US as the low gas periods for the week.  Gas changes every block, so it’s important to watch before you submit a transaction.  Recently, it’s not uncommon to see short term spikes in Gwei into the hundreds.  Personally, I hate losing money to fees, especially when I could just wait and pay a lower fee in a few hours or even days. 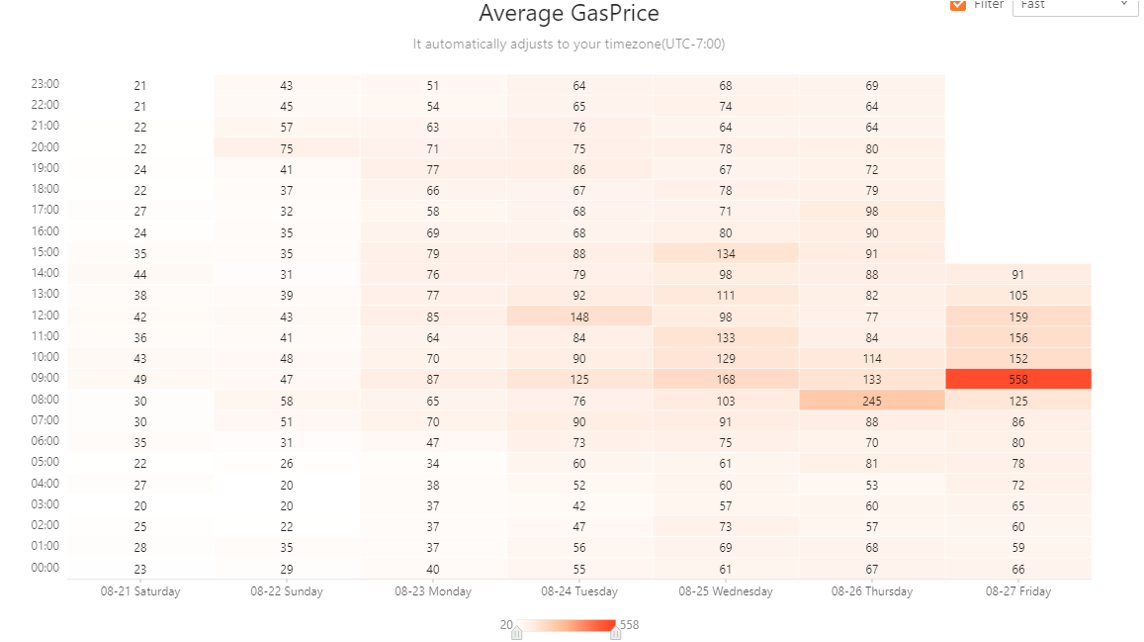 If you’re enjoying the calculator, thank you for the tips and thumbs up here on Publish0x, and there is now a public key (Ethereum and Polygon) on the calculator instructions tab where you can support my work directly.

Quick review of the new features:

One of the missing features of previous versions was the ability to input an APY rate different for your staking compared to claimed rewards.  All claimed rewards are automatically added to the ILV pool where they vest for a year.  During that time, they earn at the 2x weight, yielding the highest possible return from this pool.  Those initially investing can choose to stake flexible (meaning you can withdraw your initial investment at any time), or locked, with a variable slider from 1 week to 52 weeks.

To better use this tab, ensure you add your values at the top in the Inputs section.  This includes your initial ILV purchase price, number of tokens you are staking, your initial APYs (both for your initial stake, along with the current max APY at 2x weight).  You can also add your price predictions for ILV, and your estimated gas fees.  Revenue distribution is also an input, though these are not yet included in the ROI calculation.

For a quick example - let’s review someone staking 5 ILV that they purchased for $500 each. 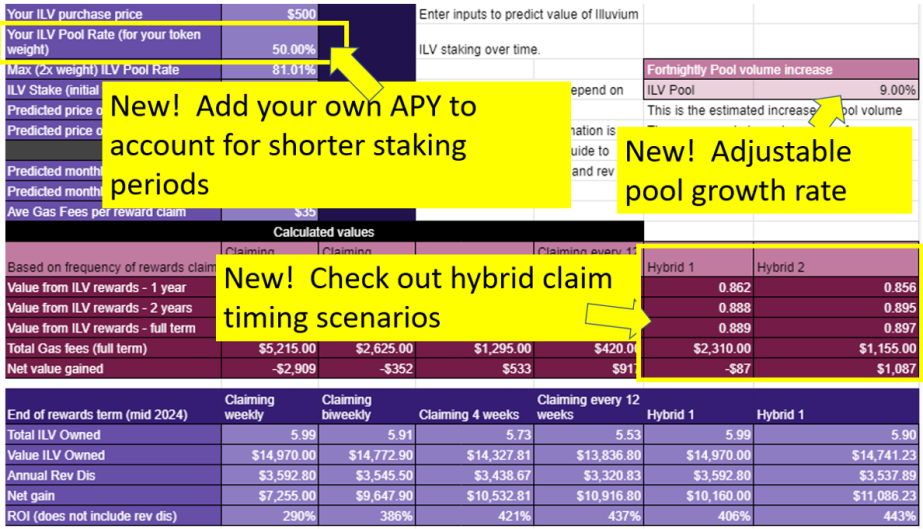 The calculator will estimate the number of ILV this person will earn as rewards based on their claiming frequency.  When you claim rewards from the ILV pool, they are automatically staked at 2x weight, and earn the max APY while they vest for one year.  Remember, only when rewards are claimed do they begin to compound.  Claiming also enables them to become eligible for revenue distribution.

But what’s the “right” answer?  The maximum number of ILV (0.882) would be earned if the person claims weekly, however, they will spend over $5k in ETH gas fees to do so (estimating $35 per transaction).  Claiming every two weeks drops the number of ILV earned to 0.874, but also decreases estimated gas fees by half, down to $2,625.  The actual return on investment (ROI) would increase by spending less money on gas and claiming less frequently.

My new “hybrid” models of claiming show that a better strategy is to claim more frequently at the beginning of your staking, and then decrease as rewards decrease.  The total number of rewards drops by 3% every two weeks, and I also anticipate rewards to drop as more people enter the ILV pool.  This will be from new stakers, and also from more ILV moving into the ILV pool due to claimed rewards from all staking pools.  My updated estimate included in the calculations is a 9% biweekly population increase based on data from here.

With my current estimates, and the predicted price of ILV at $2500 in 3-years, the “correct” answer is to follow the Hybrid 2 claiming schedule.  In this scenario, you begin by claiming rewards every two weeks until March 2022, then switch to a monthly (4-week) claiming cycle for the next year, then claim every 12 weeks until the end of yield farming, which is late June 2024.  Applying this technique, your total gas fees will decrease to $660, and your ROI increases to 567%.  You actually make almost $2k more than claiming weekly.

Critical factors that impact these numbers are the gas price and your estimate for ILV price in three years.  This also assumes that you choose to leave your ILV staked for the entire period.  I encourage you to try inputting different estimates for ILV to see how that impacts your return and which scenario is best.

I won’t review an example for this, but by popular request, the SLP tab now includes a place to include your current staked ILV tokens.  This only supports ILV earning at the maximum ILV pool APY, but for rewards claimed from the SLP, this is accurate.  I will address a common question I see in the Discord Staking channel - what if I have $1000?  Is it worth it to stake in the SLP versus the ILV?

First, we’ll determine the expected return in the SLP.  Add your inputs and assumptions in the top section and check out the calculations below.  Similar to the above ILV example, there are new Hybrid claiming models as well as a “never claim” option, where you would just stake and never claim your rewards until the very end.  Due to gas being higher to claim from the SLP, as it claims both the ILV rewards and SLP rewards, plus the more complex SLP interaction, we estimated an average claim gas of $60.  In this scenario with staking 0.4 SLP worth about $1000, the optimal claiming scenario would be to claim using the Hybrid 2 model above to maximize ILV earned without spending too much on gas, though never claim actually shows the highest ROI, so the total return will vary greatly based on your future ILV price target, and how much gas you want to invest to gain ILV.  Following Hybrid 2 timing, you would have 3.43 ILV at the end of yield farming.  At your estimated ILV price of $2500 in mid 2024, your total ROI including transaction fees will be over 560%, turning your initial $1000 (plus $1920 in gas) into over $8,500.  With your estimated revenue distribution at $50 per month, you’ll also be earning another $2,000 per year in ILV from the Vault. 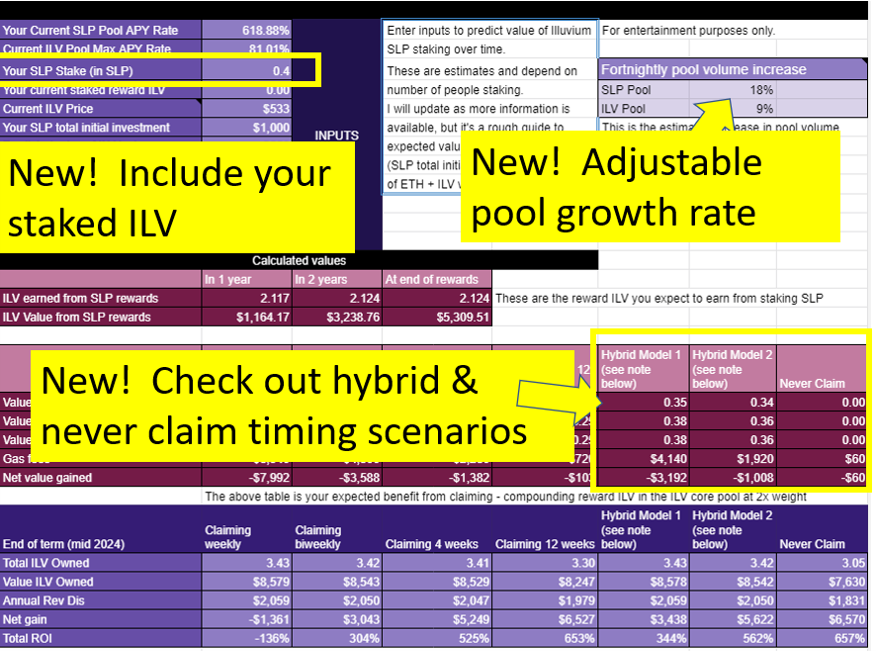 If we leave everything else the same, and rather than putting $1,000 in the SLP, you staked 2 ILV worth $1,000 in the ILV pool.  With an estimated average gas fee of $35 per claim, again claiming every 12 weeks is the ideal scenario (or never claim for a slightly higher ROI), and you expect to earn almost 0.56 ILV over the course of yield farming.  This is significantly lower than the nearly 3.43 ILV you would earn in the SLP, showing the current power of the high rewards in this pool.  Remember, risk increases significantly in the liquidity pool, and you are now tied to the price of both ETH and ILV, as well as greater smart contract risks.  Make sure you consider your investment, and never invest more than you can afford to lose.  Right now though, there is certainly high risk and high reward investing in Illuvium, particularly with the Sushi Liquidity Pool staking.  Note for both of these scenarios - while you start with an initial $1000 investment, gas actually becomes a major expense over time and plays a huge role in your ROI, and over time, you actually chose to invest more in gas than your initial investment!

UPDATED 8/28/2021 - Added Pool volume increase estimates.  With this update, rewards calculations decreased significantly.  Please check back as I continue to monitor the impact of pool growth on ILV rewards. 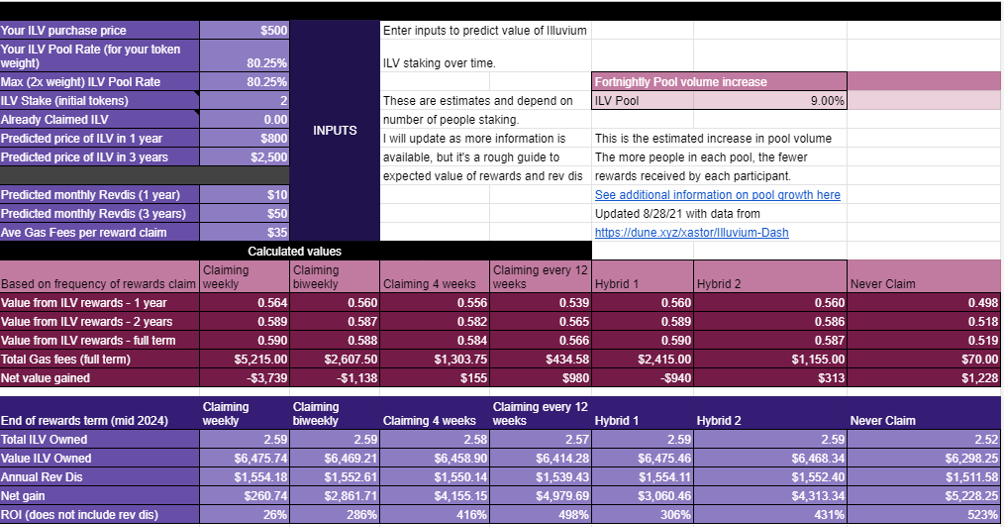 The last new feature, the “Imperm Loss” tab is big enough to warrant its own article, so stay tuned for that shortly.  Impermanent loss and the impact on the Sushi liquidity pool staking is certainly one of the most discussed topics in the Discord channel.

Rewards for staking on Illuvium remain quite high at the moment, as we are not yet two months into three years of yield farming for the upcoming blockchain P2E game.  Check out my calculators to understand potential impact on pricing and feel free to dream a little with some crazy investment or price scenarios.  Happy investing, and good luck! 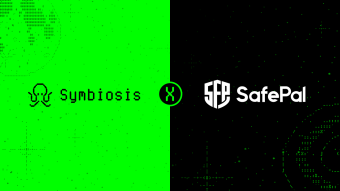