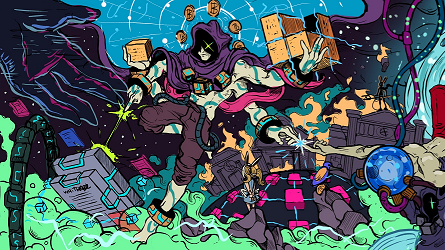 So this is the third and final stage of the 'Chapter 1: The Uprising' puzzle. For those who have followed these articles for the last few weeks, I thank you very much for the continued support. In case you are interested in going back and checking out 'Where we have been' then a great place to start is these previous articles:

Today, rather than focusing on where we have been, our attention turns to where we are going. It is with the final part of this puzzle that we (Alice) will leave the Garden of Earthly Delights (Hieronymus Bosch) and attempt to catch up to, and follow, the Golden Rabbit along the next Chapter of our journey 'Through the Looking Glass'. This puzzle, as I've mentioned will (and has) rewarded the participants in a variety of ways, not least in the shared process of journeying and discovering together. The ever mysterious puzzle creator (GITM) has often reminded us of this along the way, and this concept hold true for all aspects of life:

The journey though, of course, has a destination and in part that is the awarding of 1 BTC to the completer of the puzzle. It is also the opportunity to close out a chapter of the Bitcoin Origins (BTCO) project and start anew. It has often been highlighted that this project will follow the evolution of BTC's own story not just from an historic perspective but also in the way the NFTs are created an distributed, indeed, we've had a niche project that few knew or participated in with moments 1/2, initial adoption with moment 3 and then proliferation, abundance and price drops with moments 4/5. Scarcity is now to come back to the forefront and after that, who knows.

Rather than musing too much now on the BTCO project and the potentials for the future I'll bring it back to the puzzle in hand, here is a brief summary of where we left off last time, to jog our memories...

In the first stage of the puzzle Alice was guided around the garden looking for the illusive golden rabbit and in doing so took part in a strange 'nose game' that finished with her finding of "His Oddness". This involved overlaying a number of keycards onto the painting which mapped out the the Lepus constellation. Finally, when flipped the constellation's ear landed exactly where His Oddness was to be found in the painting. 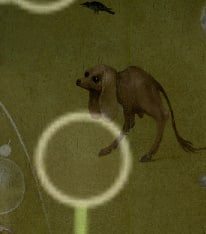 After finding 'His Oddness' Alice is told of the next stage of the journey she needs to take. This time flying around the garden more directly and looking for unique characters. The end of this journey was to lead Alice to the last individual known to have seen the golden rabbit, 'The Key Holder'. In this stage of the puzzle speed was everything, the directions (up, down, east, west, etc.) were indicated in the text and we needed to quickly find our way to 'The Key Holder' in order to get through to the last stage (only the first 5 individuals made it through this stage).

The Way Out of the Garden

So this is where we are now, with knowledge of 'The Key Holder' but still talking to 'His Oddness', which is where the next stage of the journey begins. However, before continuing the story there was a little more information provided to the hunters.

08-May-2021 (preparation/rules): GITM removes all other hunters save from the final 5 from the telegram channel and provides the following information.

Be ready. Your final puzzle will unfold very quickly.

Before we begin, I would like to express my gratitude for your participation. It is my hope that this exercise has proven valuable to you all.

While there may be a small measure of disappointment should you not provide the winning solution in time, I intend to demonstrate the value of this puzzle in how it relates to the evolution of Bitcoin itself.

Any item carries either innate value or perceived value. Food provides nutrition. It is necessary for sustenance. Money can provide security. But art sustains our souls. Puzzles and competitions feed our curiosity.

This initial puzzle has taken you far and wide. It has opened the door to your appreciation for at least one great work of art.

Perhaps the value of these factors, when added to a token of my appreciation for all five finalists, will provide a measure of satisfaction for those who do not triumph today.

Remember, the value is also in the journey.

(1) The final clues will begin at exactly 10AM PST.

(2) It is my intention that each of you be given the exact same opportunity to succeed. You will be in receipt of a significant clue in this chat. I suspect it will be enough to elicit an answer or guess within minutes.

(3) Each of you must send me a direct message in Telegram. I will accept guesses in the order they are received. Before we continue further, please send me a message now and I will confirm its receipt.

(4) To reiterate: you will each be given one guess as to the identity of the Golden Rabbit. Should you guess incorrectly, each of the other finalists will be given one guess ahead of your next attempt. For the sake of complete clarity, please indicate if you are unsure of this mechanism.

Your guesses will be sent to me via direct message. They should accurately identify the Golden Rabbit in the form of a screenshot.

In order to provide a level playing field, you must each be ready to superimpose a provided key atop the Bosch image.

As I have stated previously, what you each do with your potential winnings is yours to decide and yours alone.

An there we had it, the rules were clear. We were to finally find the Golden Rabbit but were only allowed one guess to do so. Furthermore the method we were to use was to overlay a specific keycard with the painting to get there. This stage again was going to be fast though combined some of the earlier methodology. This was where minutes began to seem like hours and all of the remaining hunters were filled with nervous excitement.

“And where must I go from there?” asked Alice. She was not sure she could remember all of these directions, and she was even less sure this strange little creature was fully unscrambled. His Oddness reminded her ever so slightly of the Cheshire Cat.

“Oh, I always head due north in situations like this,” replied His Oddness. “Use the key exactly as intended, and make sure you note the points of interest you have seen along the way. That will get you exactly as far along as you need to be in order to catch the Golden Rabbit before he leaves.”

“What an odd set of instructions,” said Alice. 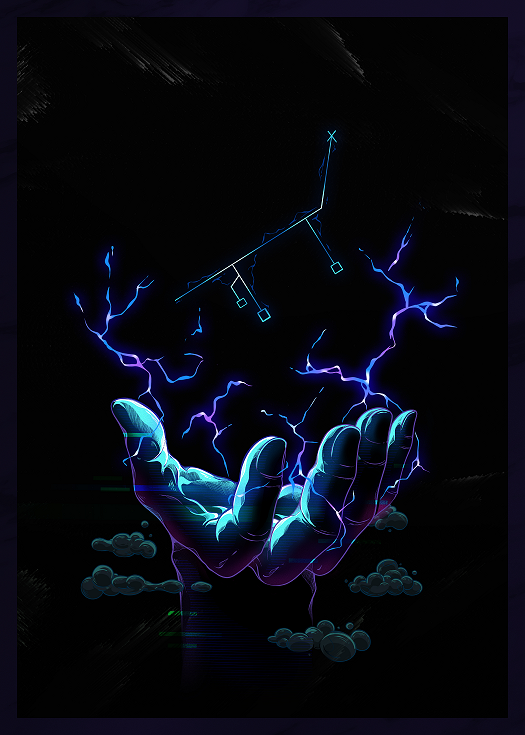 Solution: As the text suggests we need to head north from 'The Key Holder' using the keycard to trace our path to the golden rabbit. Indeed the references to the 'points of interest' along the way actually provide confirmatory steps for the overlay of the keycard as the card has 3 boxes on it, which fit exactly with three well-known points we passed earlier in the painting:

All three of which have been shown frequently in the Satoshi NFTs. First I rotated the keycard so the initial section was vertical, then rescaled and placed the the start point on the end of the nose of 'The Key Holder', this was the result. 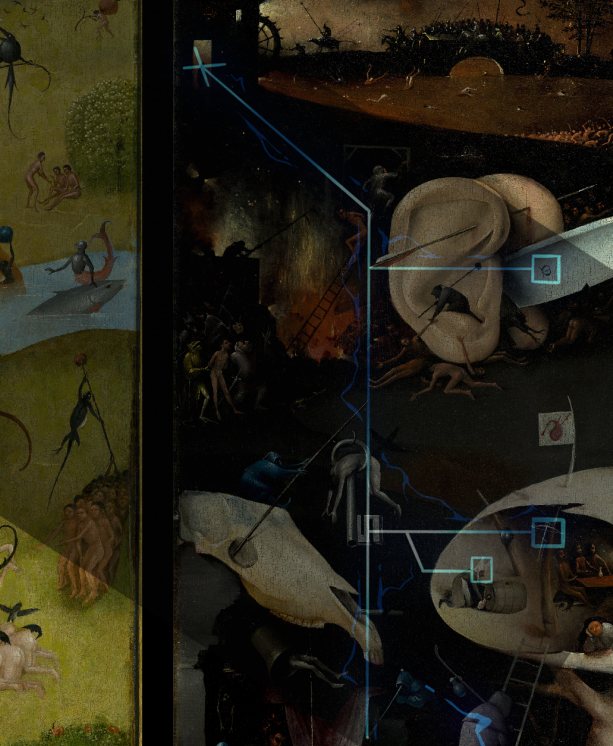 Just 10mins after the keycard was given to us all of the guesses were in. 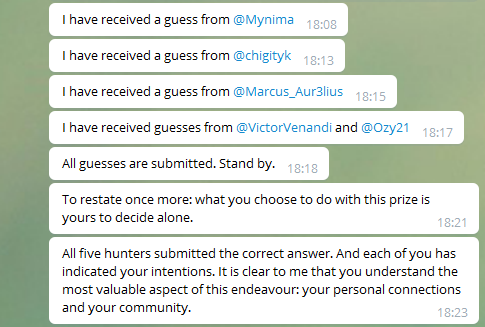 And here we had the results...

Mind-blown, dazed, confused, giddy, thrilled, amazed, thankful all words that can be used to describe how I felt when reading this. However, I'll opt for one of my most commonly used (as my other half will tell you) understatements.......I was chuffed! Though, I was the quickest, all of the hunters reached the same answer, we were all correct!

This is where we may believe the end of the story takes us, winning a whole BTC.....wow. Considering that when I first joining the BTCO community I tried to solve an already solved puzzle this was a hell of a leap up for my expectation (which were no where near this level).

Well this was something that I, and it turns out my fellow hunters, had actually considered when getting to the final 5. What happens when one of us wins, it is a mighty gift (around $50k). Well as it turns out all of the hunters were of a single mind.

The winning submission was provided by @Mynima - they have indicated their desire for the prize to be shared among all five finalists. This is a clear indication that you are beginning to understand the value of the journey itself. The greatest value that can be found is in each other.

Whoa apparently every single one of the stated separately that they wanted to split amongst the 5... amazing guys

You see, every one of the 5 hunters in the last round had submitted their answers and at the same time had declared the same intention to split the reward among the others. Not only is the heartening to see for a group of strangers from around the world, but it sets a fantastic note for the community as a whole moving into the next chapter. Indeed, when I look at how this step could have happened I cannot think of a better outcome. Sure 1 BTC would be nice, but better to have someone to share it with.

The gifts didn't stop there though. In honour of the achievement of getting through the first stage of the puzzle GITM indicated that all 21 participants will received the below (sketch version) NFT a combined image commissioned to commemorate the first 5 moments of the BTCO releases along with the hunt. Furthermore, the 5 contestants getting through stage 2 are to be given a rare animated version (which if you have seen any of the animated BTCO NFTs you'll know is quite some prize!).

On reflection, taking part in this puzzle and the time spent with the BTCO community has definitely been its own kind of reward. I'll admit it helps that I have the kind of mind that enjoys these sort of things, but there is also a real sense that the community is exploring the ideas in and around the cards together. It is also a good excuse to learn about new things, quite often I find myself on Wikipedia reading about random topics off down some rabbit hole, that is the good thing about a journey, you never know what you'll find along the way, even if you already have an idea in mind of where you will end up.

If you're reading this and wondering how you can get involved look now further, the channels below are where it all starts. My suggestion is to jump in and start puzzling, everyone responds well to new ideas and points of view.

Additionally, there is a website and Trello board to help get folks up to speed: 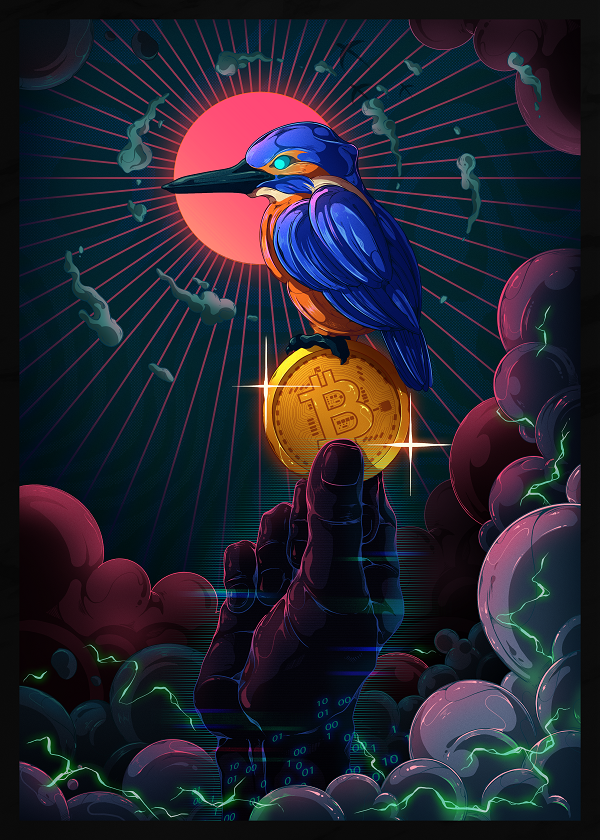 Thanks for reading, hope you enjoyed following along with this puzzle and that it encourages you to get involved in the next stage "Through the Looking Glass", good luck y'all!

P.S. To get you started on the next step down this path here is the latest information. Indeed, GITM has wasted no time and has set us the next puzzle this is where it begins. 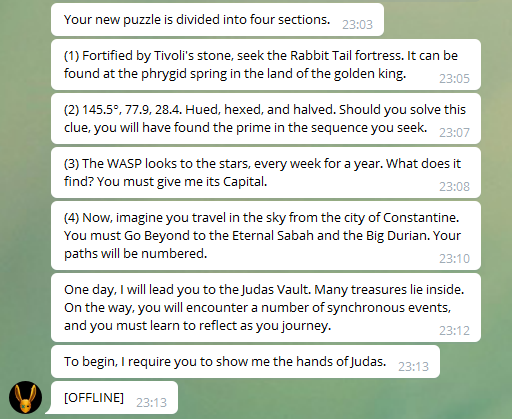