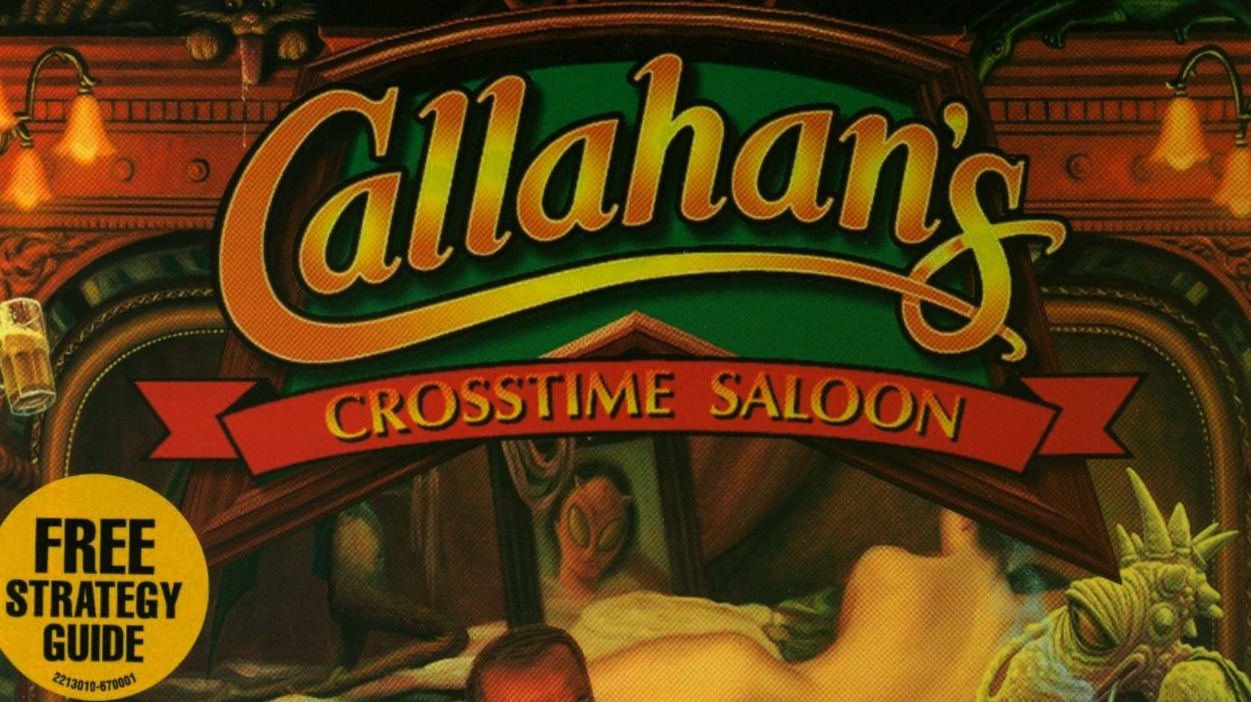 The 90s have been seen by many gamers as the golden era of adventure games. And no game exemplifies the lengths of creativity in this period than Callahan´s Crosstime Saloon. Made in 1997 by developed by Legend Entertainment, it was based on a series of books written by Spider Robinson. In fact, the author himself was involved in its development. 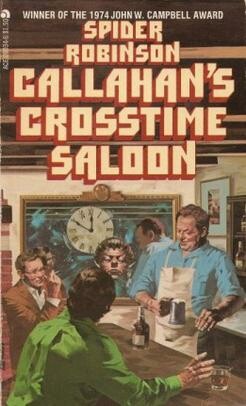 The basic premise of these stories is that it´s all set in a bar regularly visited by a bunch of odd people, be it aliens, time travelers, and even vampires, run by one Mike Callahan. The visitors come here to simply have a drink and share their troubles. It´s basically a science fiction of Cheers.

Each book revolves around a particular problem that regulars help to deal with it. This premise alone makes it a good fodder for an adventure game concept. So, let´s how the games hold out as an adaptation.

You play as Jake Stonebender, a talented folksinger with a tragic family history on one of his visits to the bar. The night starts pretty much like a regular night, you solve a riddle contest and the other regulars tell you all about their troubles.

It´s during these conversations that Jake ends finding himself in a variety of fantastical situations to help his friends. Time traveling to save an endangered species of the cacao plant, traveling to space, helping a heartbroken vampire, these are some of the few adventures you´ll find yourself in, during the course of a single night. It´s the ultimate all night bender.

Meanwhile, the creator of our universe just got heads up from his superiors that they plan to terminate his universe project, so has decided to visit the bar to see it there something our world has of value in order to perhaps save it, but that doesn´t come but later in the game.

There is a variety of interesting and quirky characters to interact with. I personally had fun talking to them. As the game progresses you get to be familiar with them to the point they feel the kind of people you wanna hang out and have a drink with. I was legitimately sad when the game ended. Although I didn´t expect the talking dog. They can border from sarcastic, to just plain weird at times.

There were a lot of entertaining dialogue responses, but a word of warning, prepare to deal with puns, so many puns. Some people might not be into that kind of humor, but I think it gives the game it´s charm.

The dialogue is also voiced, and the actors did a pretty good job and conveying their character's personality.

Being pretty much a product of its time, don´t expect advanced graphics. The game is played in a first-person view where you click on arrows to slide the screen and click to change the location. This is a bit different from other games where you click and the character moves. I actually prefer this method, as it makes backtracking to solve puzzles a less of an annoyance. 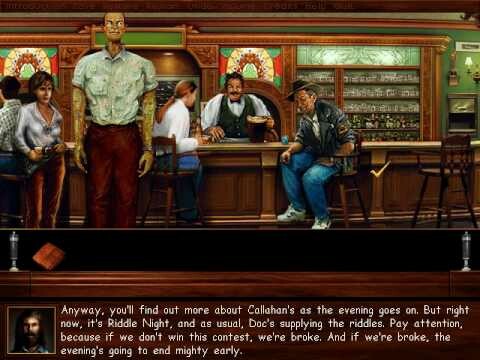 The fun part is the inventory menu is in the shape of a bar countertop. You click on the beer handle to see other items.

Still, the game is pleasant to look at. They did a really good job in conveying the feel of the type of adventure you´re in, a busy city or a town full of monsters. Everywhere you go there is always something interesting to look at, even it´s not active gameplay element. The use of ambient sounds, like people talking and glasses clinking is a nice touch.

Gameplay is pretty much standard, you click and collect objects to solve a variety of puzzles. They aren´t necessarily hard to solve if you solve it through trial or error, talking to characters also give you a clue on what do next. However, I have been stuck with some puzzles. Some are pun-based ones. For example, there was a puzzle that I struggled to solve. It was a riddle of sorts, you have a bunch of words revolving around a certain theme. To solve it you must choose words synonymous with the words written, say them all together, and figure the answers.

Since I´m not a native English speaker, I struggled with this one. Not saying this puzzle is a bad one, in fact, it´s quite clever, there are even riddles like this in the original novels.

Also, this game encourages exploration. By that, you can essentially show different objects to people just to hear their opinion. Some of the clickable objects will have a variety of actions, not all of them have anything to do with progressing the game but it´s still fun to Jake´s reaction to each and every single thing.

Some, case they are just there as a fun easter egg. I had the official manual with me and it suggests that I do things like getting Pytor the Vampire to react to things once when he is drunk, and again when he´s sober because his response will be different.

In addition, to be an author, Spider Robinson is also a musician. He actually wrote some of the songs in the game. You listen to them by talking to the piano player at the bar. The song at the beginning is kinda catchy and makes it feel like something you heard being played live in this sort of setting.

The music gives the settings a little bit of color. However, there are some flaws. This happened when I was doing the space segment, or the more perilous parts, it started to play this very irritating bit music. It was repetitive and jarring to my ears, I had to play that part with the music turned off, making it hard to concentrate. But the rest is fine.

I didn´t want to end this review without talking about one of my favorite parts of the game. I might be a bit biased because of my obsession with horror and the supernatural, but I really love this one.

In one adventure Jake asks if anyone has seen Pytor, the bar´s resident vampire and designated driver. He finds out that he has returned to his homeland and plans to take his own life ( by sun of course) due to a broken heart. So, Jake goes after him and tries to talk him out of it and possibly have him reconcile with a lost love.

The fun part is across the horror setting, this is a fantasy version of Transylvania full of monsters and ghouls alike. It even comes with its version of Callahan´s called Casimir, which is a bar for monsters. There are plenty of monster based puns. I remember having having to deal with a skeleton shopkeeper trying to trick Jake into allowing him to eat his flesh. 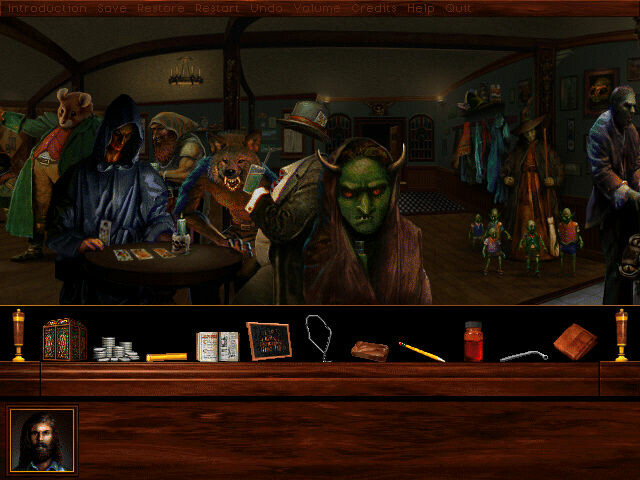 I loved how some of the puzzles have taken inspiration from monster lore, like using vampire weakness to solve it or a freaking Frankenstein reference. The other adventure felt like a letdown after that. But still, it was fun to play it.

A far as old games go, this is worth checking out. You got weird adventures, great humor and touching camaraderie between different people. It is great if you´re looking a relaxing and fun type of game in these troubling times, especially since most bars are still closed. So, come on in and have a nice pint of beer at Callahan´s.

Where to buy: Due to the fact this is an old game, it might not be easy to acquire it through legal means. GOG does not have it seems, so your options would be to buy a copy on eBay or try to get a copy from unofficial abandonware sites like myabandonware  on an emulator. While this is a grey area, this is the best way to access old gaming history.

Humble Choice (Subscribe to access a trove of new games each month for a decent price): https://www.humblebundle.com/subscription?partner=asgardianviking

Publish0X (If you´re reading this here, what are you waiting for? Create an account and earn crypto for reading):https://www.publish0x.com?a=pnelG6VdKB