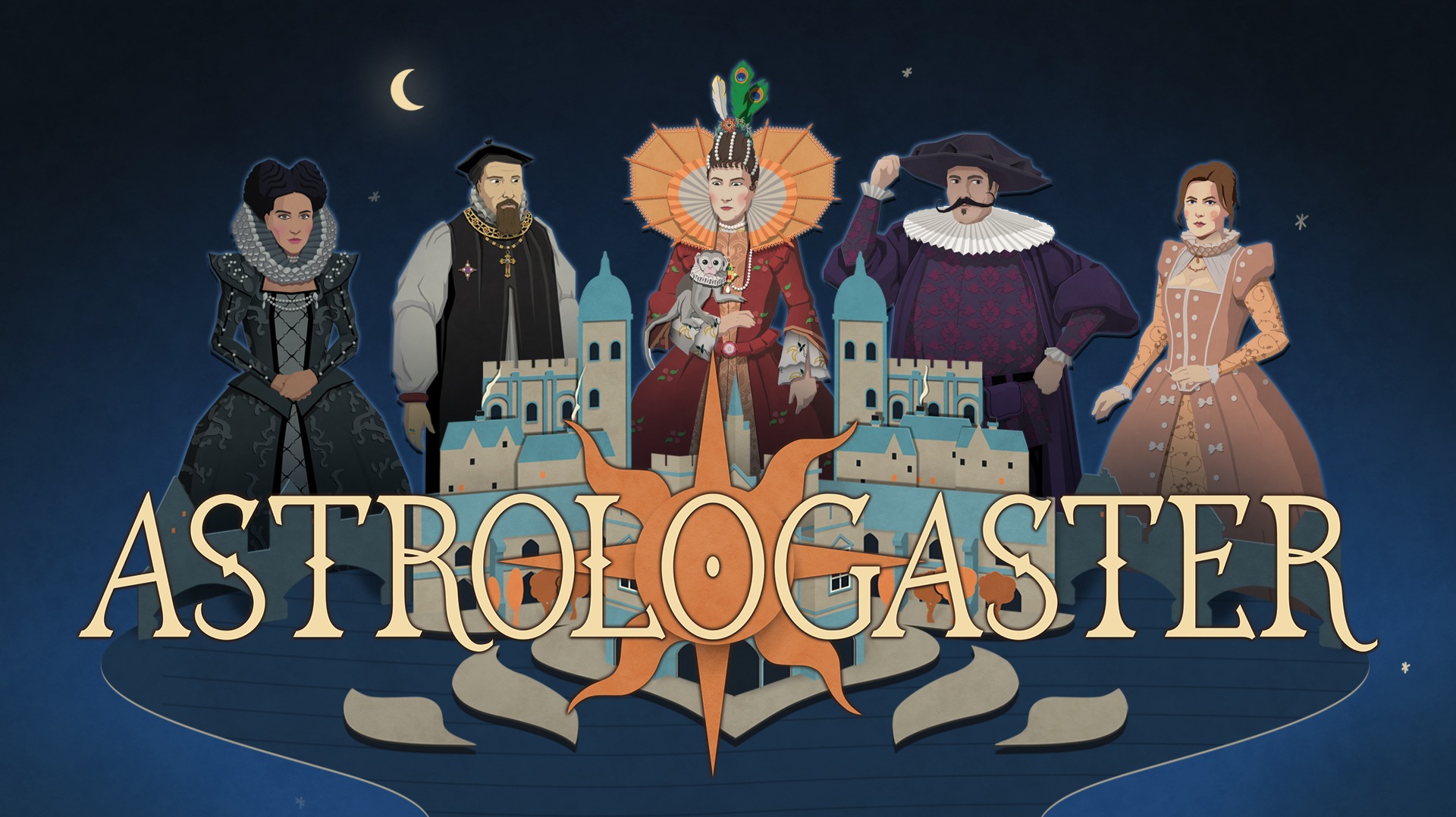 Did you know that during the reign of Queen Elizabeth I, Doctors would look to the stars to figure what ails their patients? That is the main theme of this unusual game. 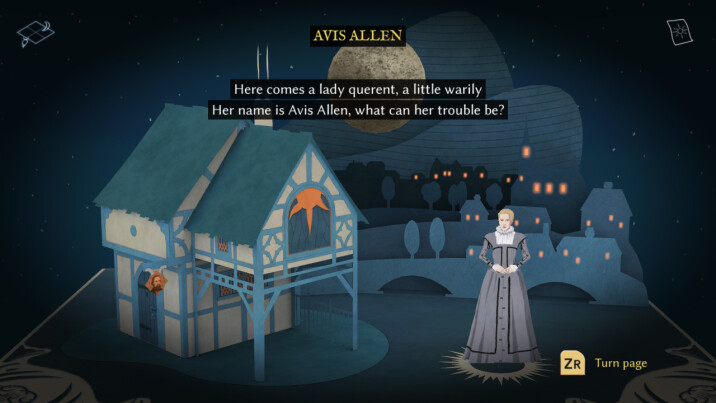 When I first started to play this I didn´t know if calling it a visual novel is appropriate, the whole thing plays more like an interactive pop-up book with typical elements of a stage play. What do I mean by this? Each character comes with their theme song describing current events and with lyrics so you can sing along! The music is also catchy with a mix of lutes and a choir.

And the characters all look like stand on a stage, with a colorful stage background and I might as well be watching a Shakespear play. 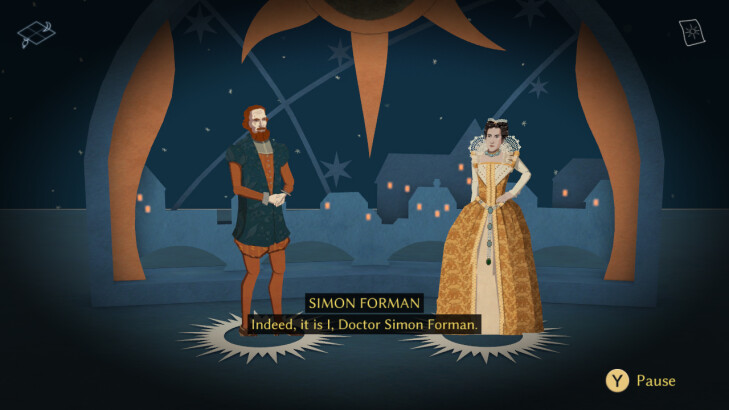 So, the story is based on the real casebooks of one Simon Forman, physician, occultist, and renowned astrologer in the 16th century. Players will get to explore a bit of his life, his work as well as some historic figures of the era. It´s also a very educational game, as it gives you a glimpse of how people lived in that era and even how medicine was practiced. Of god some of the things there make me thankful we live in an era of modern medicine.

Anyway, Simon here seems to have gotten into trouble from the College of Physicians for practicing medicine without a license, his best option is to A, get a medical degree by using letters of recommendation from his patients or B, a personal recommendation by the Archbishop of Canterbury himself!

You can also expect to solve all sorts of cases, but as it turns out it´s not trying to cure someone´s illness. People will come to Forman for really inane things, like help with their love life, financial and career advice, and even predict certain historical events? 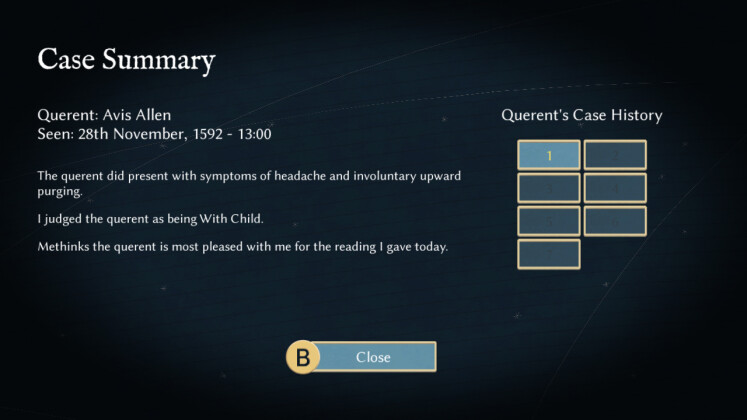 Players can try and do their best to give an accurate prediction or if they´re feeling a bit mischievous, ruin everyone´s lives because even an incorrect answer can be just as entertaining.

Of course, trying to give the right one is easier said than done, a lot of the times the choice is obvious if you pay attention to their symptoms, but sometimes it´s too vague, that I have end trying to give what I thought was the right answers except it blew in my face.

Not to mention ones that refer to historical events, yikes, which can penalize somewhat history ignorant players. I´m saying as someone who has been this game blind, and I was lucky that got some of it right due to pop culture osmosis. But what I know however is that accusing someone of witchcraft is always the wrong answer, unless you wish to screw things up

What´s interesting is each choice presents you with a constellation and its meaning. A pro-tip, to ruin Simon´s plans the College of physicians will quiz on his knowledge, so um better get a pen on hand and write that down. 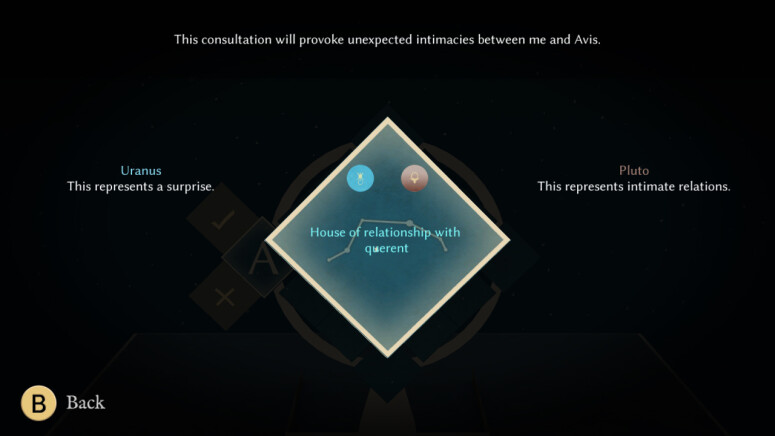 Their reaction, however, can be unpredictable, there have been times where I wonder if I should just lie and tell them what they want to hear or the truth. Even weirder is when I regained their favor in the future when they realize I was right. And some patients are just hard to please, like Mary Payne or as I like to call her, Protestant Karen.

She´s this really noisy woman obsessed with rating out Catholics and is quite a pain. Oh, what´s that? Migrant Dutchmen coming here to rob us and take our women? You think your neighbor is some evil witch? If the successor to the Queen of England is a protestant?

If I tell her that the Dutch aren´t that bad, tell her the pious man she admires is stealing from the church, say who is gonna rule England in the future accurately she get mad at me. She was the only patient I couldn´t get a letter from, imagine that.

Speaking of patients, there´s is a ton of variety, from a potential love interest, an outrageous Italian, priests, and even a female poet. And Yes, not just any poet, Emilia Lanier, the first woman in England to establish herself as a professional poet, and rumor has it that she might have been Shakespeare's "Dark Lady", which I haven´t heard until I played this. Told you this was educational. Oh, and she got mad at me because I implied Shakespear was an asshole.

I think one of the patients I liked most was Humphrey Bell, a popular actor who play ladies' roles since at that time only men were allowed to perform in Theatre. Seriously his cases are a relief compared to the rest, the dude just wants to be able to work on his art, while having to deal with a sexist boss, strict beauty standards, and whether if he´s going to be able to still get roles as he ages. (Aso there´s a bit of social commentary about the treatment of Hollywood actors if you think about it)

Kinda felt sorry for the guy, so I did my best to help him, apparently the narrators like him too because they won´t stop singing how hot he is.

And let´s not forget the humor, there were a couple of raunchy adult jokes that left me in stitches, really absurd cases like a drunk with a hangover thinking she was bewitched or solving the mystery of how a noblewoman keeps accidentally poisoning her guests. And basically, comedic tropes that often showed up in plays at the time. The voice acting isn´t half bad either, I wonder if they had a background in theatre.

One complaint I have, however, is a lack of savegames, it would just autosave, which can be annoying if I wanted to replay previous sections to try a different answer, or just correct a previous one.

For the record, this game takes about five hours to complete, the length of a short novel. It offers a unique experience, it succeeds in educating people about history as much as it entertains.

Even though it can be played on the pc, I recommend playing a mobile/Switch version if only for the immersive experience of flipping through a book.

Check out my referrals on Invitation Codes 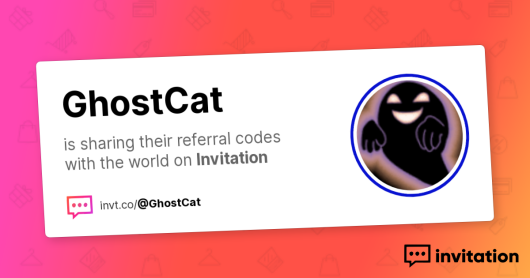 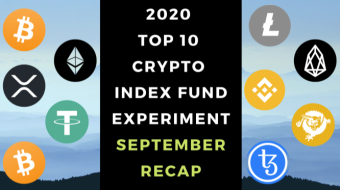 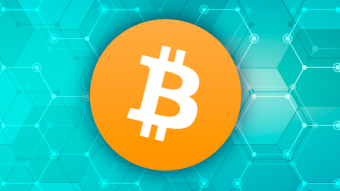 Korean Pension Fund Invests in Bitcoin (BTC)! This Conservative Group Doesn't Care about Proof of Work and Why You Shouldn't Either!