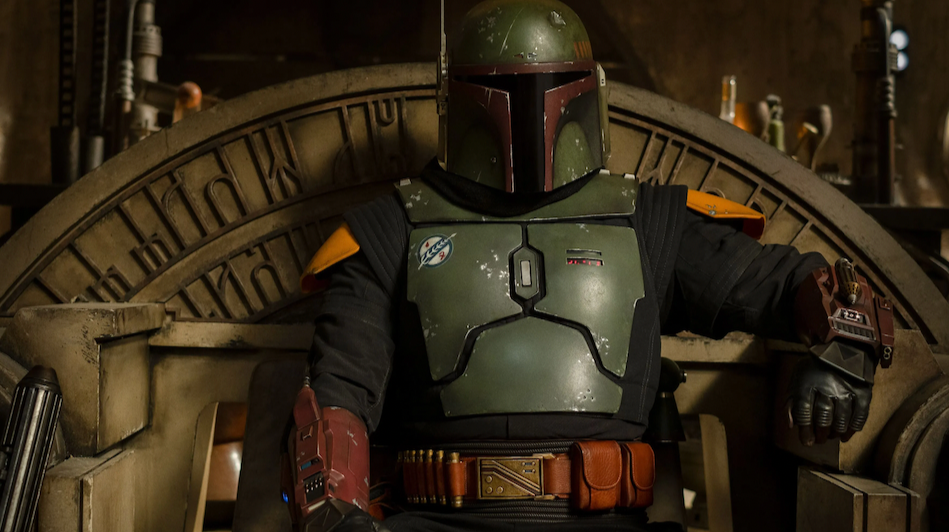 The Book of Boba Fett Continues the Star Wars Renaissance

Star Wars has written so many rules of Hollywood and entertainment that it's impossible to quantify its impact. It pioneered breakthroughs in the art and craft of film with its innovative approach to special effects, CGI and sound design. It created an entirely new model for marketing films with its endless array of merchandise from action figures to lunch boxes. And now here we are, nearly 50 years on, and its impact is continuing to be felt.

As one of Hollywood's first "forever franchises," Star Wars has joined Marvel in the modern era with a seemingly endless sprawl of spin-offs and side stories. Of course Star Wars had its own "expanded universe" of books, comics and video games that served as a fertile ground to wrap die hard fans into its sprawling mythology. However, big budget Star Wars fare was reserved for once a decade "trilogy" of film releases. This all changed as soon as Star Wars jumped into the Streaming Wars with the release of The Mandalorian.

The Mandalorian succeeded where the latest trilogy of Star Wars films failed, in minting new characters and adventures that fans instantly cared about. The stoic, titular character oozed an effortless Western movie cool, while the iconic "baby Yoda" captured the hearts and interest of fans of all ages. The Mandalorian proved that Star Wars can rival Marvel in spinning yarns with the IP that resonate with modern audiences and culture at large.

Now comes the arrival of The Book of Boba Fett. The continuing saga of a longtime fan favorite character, presumed to be dead since the character's on-screen demise at the hands of Han Solo in 1983's Return of the Jedi. However, in the Star Wars expanded universe and in the head canon of millions of fans, Boba Fett was immortal.

Now that head cannon is Disney executive suite level approved Canon. Boba Fett lives, and they are going to ride that fan wish fulfillment as far as the narrative can stretch.

So, on with the review. How does the first episode "Stranger in a Strange Land" hold up?

It's a crowd-pleasing, sparse and action heavy ride of a "re-origin" story for an enigmatic character that always left more to the imagination. Written by Jon Favreau and directed by Robert Rodriguez, the episode starts off exactly where we left Boba Fett--buried in the belly of the Sarlacc pit in the sands of Tatooine. With very little exposition, we learn that Fett, played with steely resolve by Temuera Morrison, survived. We are quickly moved through a series of familiar, 1980s era Star Wars environments--the sands of Tattoine, a village of Sand People and Jabba's distinct palace.

We follow Fett as he quickly pivots from survivor into self-anointed "crime lord." With his loyal assassin, Fennec Shand (Ming-Na Wend), by his side, he quickly maneuvers through the Tatooine underworld, collecting debts and trying to establish his new rule through doing the dirty work himself, face to face with the various gangsters and under lords of the planet.

Nothing is jaw dropping or surprising plot wise, it's only the first episode after all. But Rodriguez and Favreau have paid worthy homage to the vibe and texture of the original Star Wars films. Something Favreau has perfected in the aforementioned Mandalorian series. The creatures and droids have the right feeling to them, and in many cases, thanks to technology, actually look better realized than their predecessors from 1983. The story is highly visual, letting the actions and mystery of the episode build to a slow boil. The environments and locations take on a character of their own.

We are introduced to the dangers of Tatooine that await Fett and Shand. Reptilian beasts that live under the sands. Rival crime gangs. Inter gang politics. With Fett now having returned from the dead and shown his face again, we can start to imagine the characters both old and new who will come out of the woodwork or sand to challenge his new rule. There are obvious tie ins to be made with Han Solo, the character who "killed off" Fett in Return of the Jedi. With recent rumors of Harrison Ford having filmed something Star Wars related recently, there is the possibility we'll see a de-aged performance, similar to what The Mandalorian successfully pulled off at the end of season two.

For The Book of Boba Fett to succeed, it needs to establish the humanity behind the masked bounty hunter. It also needs to weave a unique and independent narrative that treads the careful line between fan service and new creativity and world building. For an entertainment property supposedly set in an entire galaxy, the stories we've seen so far all feel strangely limited to a singular family and set of established characters. The Book of Boba Fett is another chance for modern Star Wars to take us on an adrenaline fueled, jet-pack ride across the galaxy and reconnect us to the magic inspired by the original films. By recapturing that feeling, that cinema magic, and not simply reiterating the story beats, The Book of Boba Fett can move the Star Wars franchise in a hopeful, new direction.

The Book of Boba Fett has started streaming on Disney Plus. New episodes drop every Wednesday.