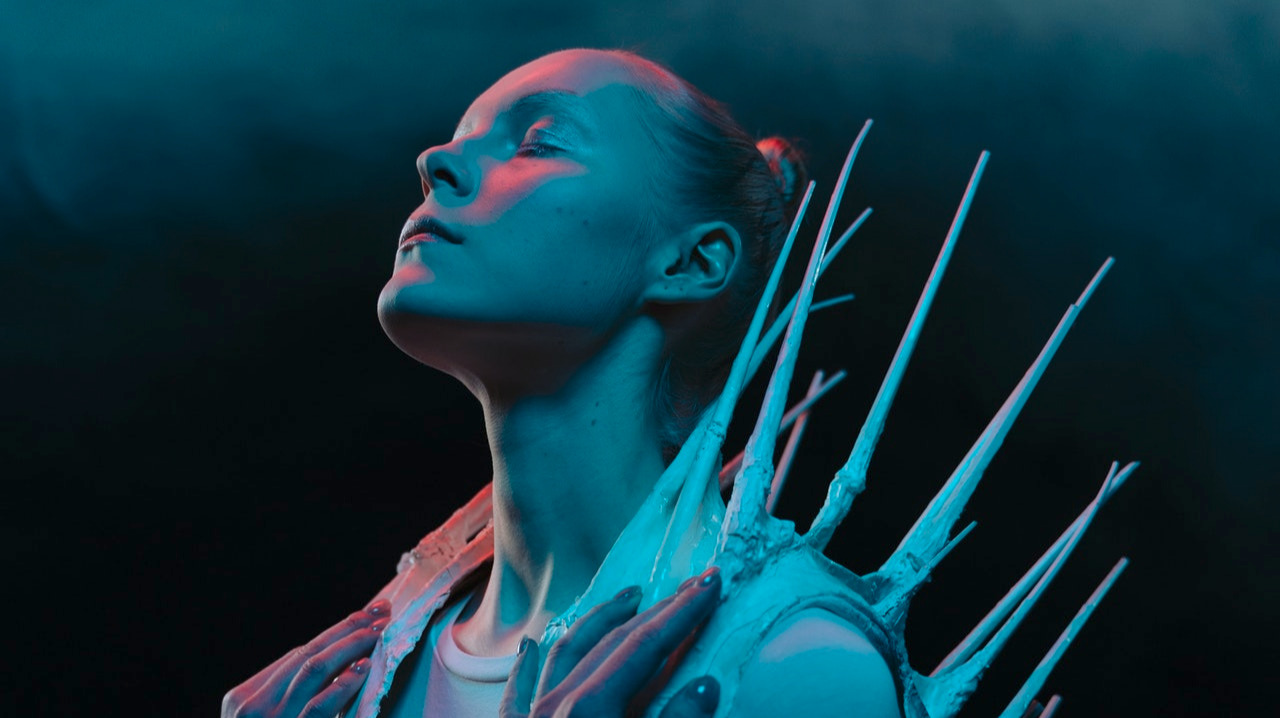 The woman who morphed into a pregnant alien capsule

I'm releasing this as a rough draft, because - some days it's not that important to me to release something that is well thought out & edited. Enjoy.

I had a highly sexual dream experience.

It started with me feeling like a student in a classroom; that's the only time in my life when I was ever in a classroom. I walked over to this woman who was wearing this silk dress. I lifted her dress and proceeded with caution. She was as curious as I was and I said, "Don't worry, I know what I'm doing."

I proceeded to finger her and she fell into a state of amazement. I'm not sure how to describe it - she just started moaning. She laid back on the desk she was sitting on and held herself up using her elbows.

Obviously being a sexual experience, I feel as though I should interpret this as such; my Pastor would definitely associate this with my hyper fixated state of mind on sex.

The woman was highly into it. I think what I must've thought was that she wanted me to perform oral sex on her. I did - I went down on her. It was fantastic. There is something meaningful about this kind of interaction, I think.

So after I went down on this woman, I began to penetrate her. At this very moment, the woman began to metamorphosize into this capsule of alien life form. The underside presented a couple of sacs which apparently were like pregnancy for this alien capsule of flesh.

It felt so strange. It felt so wrong after penetrating this woman, when she morphed into this alien flesh capsule life form and I felt inclined to inspect this life form rather than have sex with it.

TL;DR: My dream fantasy world in which I was pleasuring a young adult teacher on her desk turned into some kind of strange interaction with an alien life form. It was that moment when I felt perhaps I should not be having sex with this - alien thing.

Don't give birth to sin by engaging the enemies lies regarding sexuality. The enemy continues to attack and you need to have nothing to do with it.

I think that it would be perfectly healthy if I was married to a woman who'd be interested in all these kinds of fantastical role play situations. I'm sure many women also have their own fantasies they'd like to experience.

However, as it relates to the dream and potential for being interpreted - I wanted to have sex with this woman with this floral flowery light purple silk dress, the moment I laid eyes on her from across the classroom. She was sitting on her desk, which was probably twice the size of a regular student's desk.

It was beautiful wanderlust up to the point that I penetrated her and she became this alien capsule lifeform of flesh. That's where it turned into me realizing I was more into inspecting this capsule lifeform than having sex with it.

Quite literally her humanly limbs were absorbed into her body and her head and legs squished into the torso as well - forming this flesh capsule alien life form. It went from this very humanly experience, to having sex with what looked to be, at that point, like some kind of alien egg fleshly capsule - thing.

So I think, in the metamorphosis may lie meaning behind the dream, beside the fact that I performed oral sex in the dream while I haven't even done that in real life.

The metamorphosis perhaps regarded pregnancy and reproduction and the beginnings of Revelation which was being discussed at men's bible study.

I'm not exactly interpreting the dream as much as rambling about the dream experience itself.

The lack of experiencing our fantasies may actually limit the imagination to some extent. I would be interested in all the closeness and relational things to experience with a woman, intimately speaking. I think the idea of trusting someone with that kind of intimacy is an important thing to respect. I think sex is supposed to be a special & sacred thing, yet...

My carnal mind thinks I could also sleep with whomever I want. Both young and old women. And although nobody would stop me (beside their boyfriend or their husband), I don't believe that's becoming of a stable, functioning dominant male figure.

Sometimes the absence of a thing is what builds character. Getting what one desires, whenever one desires it and then subsequently experiencing a lack of that thing, might cause distress in that kind of person.

I can imagine what happens when people whom feel entitled to certain things in life, how they might react. I personally don't have much on the matter; when I don't get what I want, I just beat myself up and shrug. Nevertheless, I think we should become aware of what we're not getting; things we desire. Become mindful of how we react. I feel like I am writing to a bunch of autistic people who actually don't know how to behave, because that's how I feel most of the time.

I'm just not quite sure how I feel is appropriate for a situation. I might just be the perfect example of what happens when an autistic chap grows up without parental guidance after 16. Left to my own devices and not as smart as I think others would have me believe, I think a lot of all of regular "civilized" life is a bit too overwhelming for highly sensitive people, which I may or may not identify with.

Am I too sensitive? I think a requirement to growing up as my Pastor wants of me, is to

Some dreams, some interpretations.