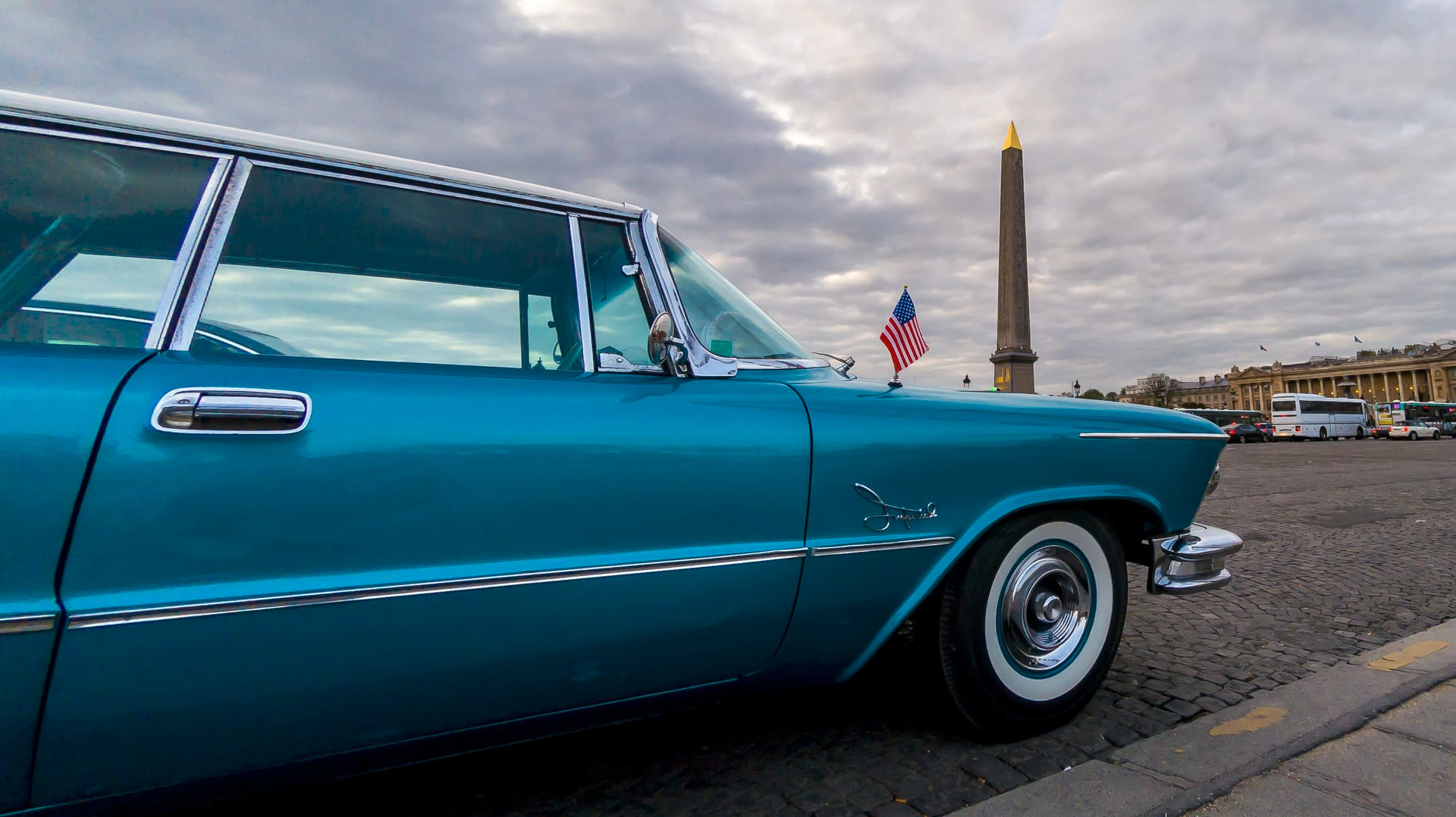 A blue Cadillac Imperial from Unsplash.com

Stealing a woman from an old man

I met this woman who had been with or married to an old man. a sense was that he was paying for her college tuition as a gift for her intimate love of him. I felt so deeply wrong about this. So I intended on separating them through conspiring against the man. I planned on stealing her away from this ugly man, I thought. There was a point we were all hanging around a parking lot. a man had an old, 60s super wide Cadillac. It was blue with alot of chrome trim.

He was pulling his car around the car I was driving a a compact crossover. I picked up a large, heavy, hollow cylinder object and threw it at this old man's windshield. It definitely broke a windshield and a object landed in this man's backseat. I feel like I threw it and he didn't know why he was being attacked. He had a sense that he had done no wrong.

The implication of  this relation

My Mother last night ended up telling me about my Dad, how she loved him. How she believed my Dad was so innocent in some ways. That is to say he didn't know why he was being attacked so many times over - by people, by a demon or demons. In a dream, this old man could have easily been a stand-in for how I viewed my Dad.

My Dad was into nice things not because he liked them, but I think because he knew it would attract women. I think he attracted this young woman, how he used to do when he was alive. He used to pay for one of his employee's college tuitions. I've seen him flirting with women openly, while we were out during family dinners. So if this wasn't a direct correlation to my own childhood, I don't know what could be.

I stole this woman away from my this old man and intended on taking her to safety. I'm not sure what happened with a woman, but I think I took her for myself. The next dream has me inflating a water bed to have hot sex with a woman. But I'm not sure if it was a same woman who was dating the old man.

In a dream, I had watched these two having sex, like I was watching a pornographic film. a man had been working on this woman with sex toys. Making her contort and convulse with sexual pleasure. It was hot, to say a least.

So out of that pornographic viewing, I was inflating this bed to have hot sex with this woman who followed me into a room. It never happened; I was waiting and waiting, but it never happened. So ... details. I wonder what this could mean.

Misplaced sexual fantasies is telling me biologically, I better hurry up and find a mate, because I'm not getting any younger. Yet, I feel there is still so much that I must learn before I can become resilient enough to co-exist in a relationship which is a productive & balanced one.

Perhaps it relates to a repulsed sex life. Perhaps it means I have strong desires that are left unmet. Maybe I feel strongly about things but others do not see them that way. I feel strongly toward some women, but I don't feel they reciprocate those feelings. When I do approach a woman I feel I have a chance with, I tend to avoid any further contact because of how unprepared I am to impress upon them my interest.

It's possible I'm waiting for a woman to come along that will give me any hint as to what she wants from me, because I'm tired of trying to guess what women want, but then again - it's a fun, exciting game. They play it safe most of a time.

I think because they have men hitting on them all day long. Yet, for a man - who do not experience being flirted with (unless I'm missing something), we think it's a new feeling. Yet for a woman, she feels it's perhaps overdone like an egg that's cooked too long and has become plastic and rigid like a toy egg for child's play. For a woman, I think it's easy to pass off flirtation as just another man who is acting more in regards to his own infatuation rather than a real and true interest.

But I suppose I'm mostly projecting. I become infatuated by an idea of a relationship which could blossom between a woman and I, but the truth is that I am an incomplete man; I'm broken. Therefore, I do not see how a woman could be attracted to someone like me who is only NOW learning how to be a man actual.

Can't we just be friends? NO!

But I do not consider a reality that a woman is likely not looking for what I am looking for and more importantly, a woman who I am flirting with is also not likely to be someone who wants what I want, because I intentionally avoid women who I think would be down with what I want to do to them. I tend to flirt with women before I can even establish a relationship with them, and I think this is the platitude that my Father had instilled in me; that women were not friends - they were solely for reproducing & sexual pleasure.

Yet nothing could be further from the truth. It may sound pathetic, and it quite literally is, but women are humans, too.

I think I avoid women who look like they'd be willing to go with me and entertain their fantasies, because I know those feelings are shareable and realistic as long as you meet the right person. I have been denying myself an ability to meet a woman who is actually available & down with trying new things, because I deem it unhealthy for my life, according to "God's plan," which I myself am unsure about.

Sex as a method of escapism

If God created us this way, why would he not want us to experience it? But I know the answer: To experience one's fantasy just whenever one has them, it would become a place of being overly appreciated. It may perhaps even become a form of addiction and a disorder like that of escapism.

I deem engaging in sexual fantasy as not a good or positive thing, so I only approach women I feel would reject me. I keep myself in check through knowing I won't get what I want. Maybe that is a bit sadist and self-defeating; purposely avoiding a kind of woman that I think I could successfully get to know, personally enough to lay with. I know what is wrong, but I also tend to distance myself from the kind of progress required to move past it.

Can I overcome without God?

I do tell myself that only I can overcome my hyper fixated sense of sexuality, but the congregation at my church have been prodding me in a direction that I could surrender myself & my burdens to God, that He will sort things out for me and I would be able to relax in my own skin enough to be myself without the overarching sense that I'm supposed to perform for attention & sex.

Perhaps my conscience would tear me apart if I were to actually lay with a strange woman, because I know I would not wait. I would jump on & off like a carousel ride. I know myself well enough that I would become someone who doesn't want more than just sex. I avoid women like a plague, because I know what would become of me if I lay with strangers.

It's not actually them

So many of my own frustrations are from this rejection from women of society - but I have to limit myself from adopting this belief that women don't know what they want, it's women's fault that I am unhappy. It's not actually them to begin with. It's just me and a way I approach them. I intend on failure, because I am afraid of success. Success through sex with strangers I have been told all my life - leads nowhere healthy. So I have developed a sense of cognitive dissonance regarding my sexuality.

Corruption starts within the mind

It's also been my quest to deny my own sexuality that has corrupted many of my own familial relationships; a idea of having sex with one's Sister is unwholesome, yet this also goes without correction in some families. Why do we do these things? Not that I have slept with my Sister, but I have thought about doing that. They are older than me by at least 10 years. It is a fantasy that might be related to my Dad's sexuality, a things he got away with, or related to solely how I deal with my own sexuality. Maybe my sexuality is an evolution of his - as if I learned to be ashamed indirectly through being his Son.

A human condition which generally develops in various, incomparable ways for each person (even two brothers of a same household), seem marvelous, mystical, and dynamic. Two Brothers even if they grew up under the same roof may have entirely unlike, unique personalities and perceptions on what the reality is and how to deal with their problems. The results are entirely two paths. This is a uniqueness of life.

Another vector to surrender

My idea of my own sexual identity has to be surrendered to God. That is a only way to overcome a crowding of sexual implications with my daily interactions with women. It's fairly difficult to live a life with meaning & purpose when it is weighed down by things which have plenty of meaning yet are misplaced and immorally guided by one's own sense of himself.

Without God, that sense (of my own sexuality) will further cause a displacement of my priorities; building up a life that will support a family. That is (or should be) every man's goal. If a man cannot take care of a child, he will not be in any position to raise a family & respect a woman of his household, either.

Some dreams, some interpretations.