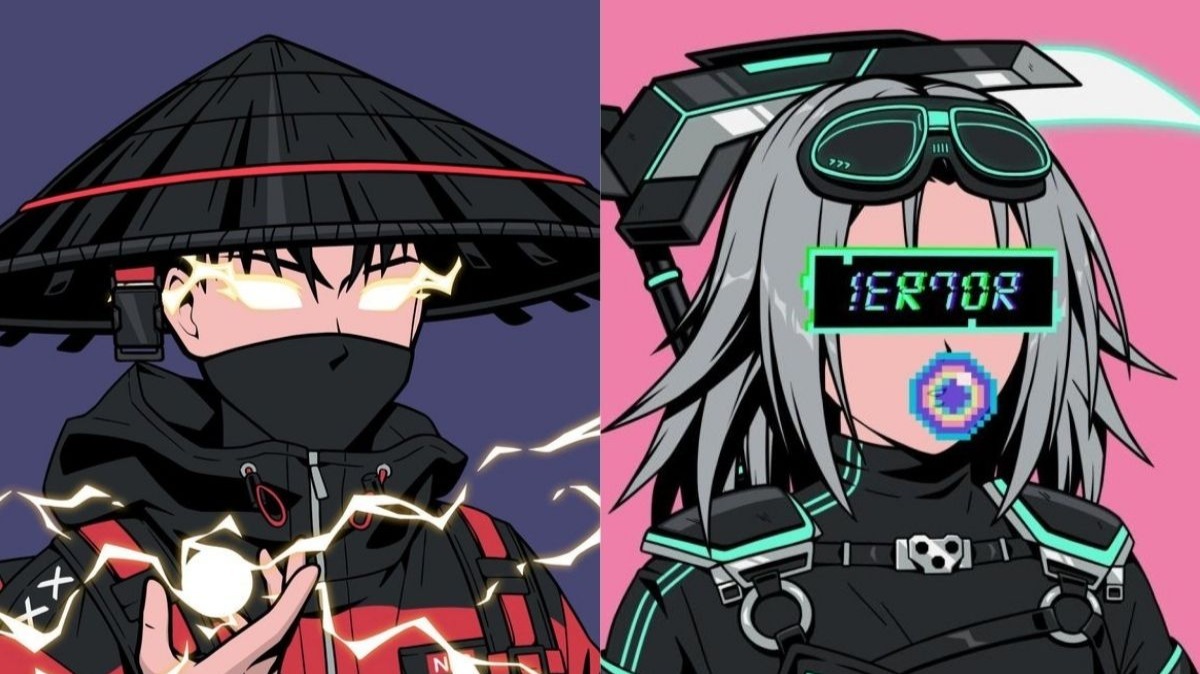 You wake up to the warm yet somewhat obnoxious breeze in the air. You barely manage to get on your feet as your strength has yet to return to your muscles. On one side you see a dusty yet perfectly polished katana. There are dried blood spots all over its tsuka. A couple of feet from it is the sword's saya - intact, as if nothing happened.

You rub your eyes because they hurt as if you haven't used them for a while and try to get a glimpse of what's around you. You stand up and realize you're amid a vast field with nothing around it as far as eyes can see but you recognize a wall towards the horizon. Having no clear idea what's going on and how or when you ended up here, you start walking to the only direction with something in sight.

Hours pass and you're somewhat surprised that you have strength in you. You finally start approaching the wall only to realize that it's not a wall, per se - it's a dark forest and you seem unable to see beyond the first line of trees. Far in the forest, though, you see a bright spark. What was it? You feel immediately drawn to the source of light and holding the katana you picked up earlier tight in your arm, you march in. It's odd, the katana feels like an extension to your arm and even though you don't remember ever holding a sword before, your confidence in wielding it grows by the minute.

The more you walk in the dark forest the more you start realizing that your sight adapts. Even though there are shadows lurking everywhere, you can see through the darkness.

Suddenly, a screeching sound resonates in your head and you feel a heavy blow to your chest as if someone hit you with a metal boulder. The pain is sharp and the screeching continues, piercing your ears and touching every nerve of your body. You feel a presence flying around but you can't localize it, despite your seemingly heightened senses. You draw your katana in a flash but whatever hit you doesn't seem interested in getting back. You pull yourself together and manage to get on your fees only to be struck by the horrific realization that whatever that creature was isn't going anywhere. It's just charging and preparing for another blow.

You're unable to see anything but its silhouette but you can clearly realize the speed it's coming at you with. You hold your katana firmly and at the moment before the clash, the creature bursts in splatters and falls a few feet before you. Drops of blood touch your face and you immediately wipe it off because it starts to burn.

- What on earth just happened? - You whisper silently completely unaware of how the creature was utterly ripped to pieces.

- Nasty little buggers aren't they? - A calm and seemingly amused voice echoes from behind you.

You immediately turn around to recognize the shadows of two people coming from behind the dark trees. One of them carries a big weapon with an edge that you've never seen before. The other is a girl, apparently younger than the man who is speaking.

- My name is F... - the voice was interrupted by a bark. Could it be that you're actually hearing a dog? The bark comes from the side so you turn around to see a giant fluffy creature approaching you quicker than you expected. You're not afraid - you're now convinced that it's a dog and there's no danger coming from it. As it approaches you it stands on its two feet and puts the other two on your shoulders and that's when it struck you - it's a very big dog, albeit fluffy - and even though it doesn't seem intimidating, its aura feels crushingly powerful.

- Etho, get off him! Ah, it's always the same with you isn't it? Excuse our companion, stranger, but Etho seems to like you and believe me - he doesn't like a lot of things around here.

- Who the hell are you and what was that thing that tried to kill me just now? - You ask the group who acts as if nothing happened.

- Ah, excuse me. My name is Fanfaron. This here is Akari - my little sister, and I believe you've already met Etho - our dog.

- Woof! - Etho barks once again and this time you feel a weird sense of might coming from the depths of that dog's bark.

- The last thing I remember was using my VR set when something happened. I felt an explosion of a kind and everything went dark. I remember screams, metal clunks, and an awful voice... a voice that I can hear clearly an it's freaking me out. And what is that katana and why do I feel that I can wield it as good as an ancient samurai? It's 2022, nobody uses swords.

- It seems so, yeah. There's a lot to talk about, my guy. The good news is that we found you. The bad news is that everyone you know is probably dead. That metal voice you hear in your mind - that's the Cyborg. - Fanfaron said calmly while taking away his ski mask.

You then realize that's not a ski mask but what shakes you is what you see in this guy's eyes. You can see that he's not much older than you but also feel that he's carrying the weight of the whole world on his shoulders. For whatever reason, he feels safe.

- Oh how I wish we were in a movie. Actually, I guess to your standards you can kind of say so.

She was getting more and more nervous. She wasn't afraid but you can tell that she doesn't want to stay here.

- We need to get going. The others will wait.

- Yeah you're right. - Said Fanfaron - Come on Ronin, we gotta move. We will fill you in at the camp. Oh, and by the way, that thing that Akari blew up - it's called a Pixel.

- Did you just call me a Ronin?

- Woof! - Etho stands up and starts walking side by side.

So that's what you wake up to. Feels familiar? Well, if it does - it means you've somewhat read the lore of one of the more impressive metaverse projects that are about to be released very soon - Ragnarok.

This is a short episode I drafted with the currently available lore and if you guys like it, I might develop this into a series that's separate from the lore. It would be a side hustle of a sort and I can probably come up with new episodes once a week.

I've used many of the elements in the official lore that you can find here.

Also, if you want to be a part of one of the most promising NFT projects that the above story is an interpretation of - you can get more details on the official Discord as links are below.

To find out why I think Ragnarok is one of the hottest NFT drops coming soon, please read my previous entry. It also gives a lot more context and information:

The Most Anticipated NFT Drop of Q1: Ragnarök (What You Need to Know)

If you liked the story, don't hesitate to follow me here and on Twitter where I shitpost occasionally: