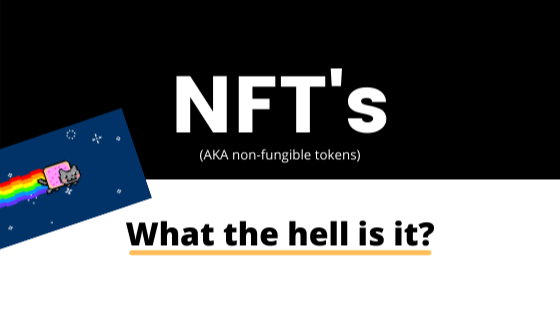 NFT’s: A short and simple explanation

NFT’s are all the rage online right now — is it lockdown boredom fuelling the spotlight or is this the rise of something here to stay? Only time will tell but let’s decode what a NFT actually is and if we should give a damn about it.

Ok, what does NFT stand for?

Ah yeah, let’s break that down — so, non-fungible basically means something that can’t be replaced aka it’s an original.

Basically, it’s a database record on the blockchain…

“A blockchain is a digital record of transactions. The name comes from its structure, in which individual records, called blocks, are linked together in a single list, called a chain. Blockchains are used for recording transactions made with cryptocurrencies, such as Bitcoin, and have many other applications.”

And, that means NFT’s are a unique and specific digital asset which can come in the form of songs, GIF’s and random pixelated images that a 3yr old could have created.

Here’s a visual breakdown of blockchain with the help of some Lego bricks if you’re still mystified by it.

Why are people going crazy about them?

Good question, perhaps boredom of lockdown or too much money and not a lot of common sense!

Like most sought after assets it’s all about scarcity.

NFT’s are unique and are certified as one of a kind on the Ethereum blockchain, so this makes them rare, which in turn makes them desirable. I mean who doesn’t want a one of a kind cat gif for ridiculous amounts of money…?

Should I care about NFT’s?

If you have a trunk load of cash and like rare digital art, then maybe.

For example, someone purchased this Nyan Cat GIF for $500k — that’s cool but you can also own this by right clicking the image and selecting “save as” — so why buy this when you can get it for free? Simple, they get the master copy, the original — all certified and stored in their digital art locker.

Is that a reason to pay half a million for something? Probably not but hey, it’s a crazy world.

Is this all hype or a beginning of a revolutionary new form of ownership?

Honestly, no idea — yes, they’re all the rage right now but could this be another bubble waiting to burst? Has lockdown boredom driving us to seek out even stranger ways to buy, store and consume assets? — all could be true.

What’s clear is that the internet has a new trend that it’s in love with and people are jumping all over this crypto-art phenomenon.

Wait, I still don’t get it?

No-one blames you for not getting it — explore these resources to dive deeper into the world of NFT’s.

People are spending millions on NFT's - why and how?