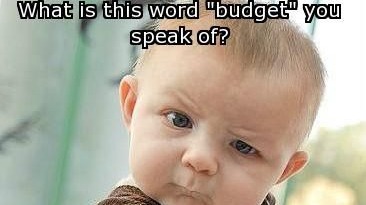 I'm embarrassed to admit it, but I've never had a budget per se. When it comes to handling my money, I've pretty much improvised. And whereas improvisation is great for Whose Line Is It Anyway, it's terrible when I only get a certain amount of money once per month... and then run bone dry less than a week later.

Jokes aside, I've been essentially homeless since October 2018, and I think it would be super to have a residence that isn't a hotel room, a homeless shelter, or any place with freaking roommates from Hell.

The worst part is that I do get sufficient money to get an apartment. And whereas I can blame factors such as my poor credit and the eviction on my record, I can't ignore the fact that I do stupid things with my money.

Or rather... I did stupid things with my money.

I whipped up a budget for October. I won't put dollar amounts for obvious reasons, but I will put percentages. If you want to know the dollar amounts, get me a high-paying job or a date with Alyssa Milano.

I purposefully omitted any money from my professional writing gig; I love the job, but the work isn't consistent mostly because my fucking life isn't consistent. (If I can get my act together, I could easily churn out works for at least five days a week.) First and foremost, I'll need to use whatever money I get to survive. After that, I'll earmark the extra money towards either rent, bus passes, or discretionary.

For November's budget, I want to include a category for repaying my friends from whom I've begged, pleaded, and mooched. They value their privacy, but I refer to them as angels for obvious reasons. I'd also like to help out some other friends who are in worse conditions than I. I can't go crazy with the charity, but I'm tired of putting off my debts -- both financial and spiritual.

All that's left to do is to see if my plan for dollars and cents makes any sense.

Talking about Myself Budgets Money Planning