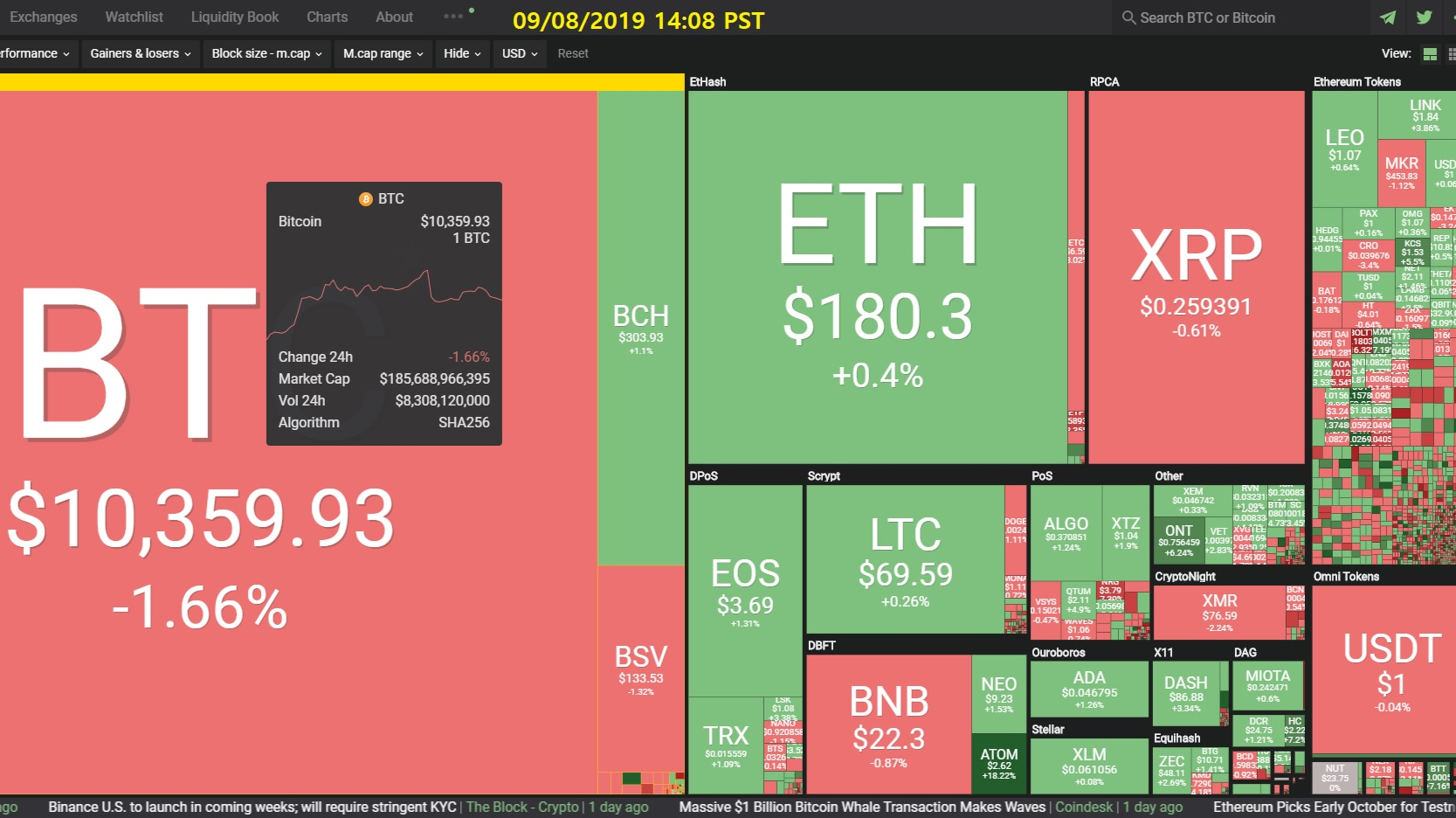 With Bitcoin Dominance At 70%, Will We See An Alt Season Or Watch Altcoins Die? [zycrypto.com]

Bitcoin has grown a whopping 200% in 2019 already and is expected to go even higher before the year rounds up. While it’s increasing, altcoins have been suffering downward trends, or at best a stagnation of growth.

This has led to a division in the crypto community on the future of altcoins, some saying Bitcoin will kill them on its way up while others say it will crash at a certain height to let altcoins boom as well.

Bitcoin and the aggregated crypto market incurred a sudden influx of buying pressure late-yesterday that allowed most major cryptocurrencies to post some decent gains, although these were largely erased overnight as BTC dropped back down towards $10,400.

Bitcoin’s consistent ability to post strong bounces with each visit into the $9,000 region certainly provides some justification for a bullish outlook on the cryptocurrency, but one analyst is now pointing to the existence of a large falling wedge, which may mean that BTC will drop as low as $7,400 before positing a sustainable rally.

Will Binance.US Launch Bring in Benefits for All Traders? A Realistic Take [coingape.com]

Per a medium post published by Binance.US, the launch of the platform is expected in the upcoming weeks. Reportedly, KYC procedures will start a few days earlier. This will give users ample time to get their accounts verified and deposit their funds.

Altcoins See Slight Uptick While Bitcoin Is Stuck Around $10,400 [cointelegraph.com]

Bitcoin has shown little price movement in the last 24 hours, hitting an intraday high of $10,580 while stabilizing close to $10,400 for the last part of the day. At press time the world’s most popular cryptocurrency is trading at $10,381, down 1% on the day.

XRP Price Might Touch $0.14 Before Breaking The Downtrend. Why Ripple Is Powerless? [u.today]

With altcoin price falling like a house of cards, Ripple seems to be on the verge. On the verge of either another nosedive or a long-awaited breakout. What to expect from Ripple? While experts don’t rush to share their opinion, amateur traders come up with their own XRP price predictions – some of which are dreadful. Here’s what people think about short-term future of XRP.

After several weeks of consolidation, it feels like bitcoin price may finally be heading upwards again… until the next dip, that is.

BTC closed out last weekend with little price movement and the lowest daily trading volume in 5 months. However, Monday saw (now almost traditional) gains and before we knew it the price was back into five figures.

But rather than jubilation, analysts were concerned that this might just be another bull trap. After all, we had crossed the $10k mark almost 20 times since July, so why should we believe that this time would stick?

Ron Paul Wants To Abolish The Federal Reserve. Let Cryptocurrency Do That Instead [cryptobriefing.com]

The greatest threat to America’s democracy might not be the Russians, according to former Congressman Ron Paul. In an episode of his weekly Freedom Report, the occasional presidential candidate and supporter of the cryptocurrency movement spoke against the Federal Reserve’s potential influence over American elections.

The tech billionaire, whose social network Twitter and digital payments platform Square are worth $35.11 billion and $26.48 billion, respectively, arrived in Melbourne, Australia on September 3 to promote the latter, which sells Bitcoin through its CashApp.

“I think [Bitcoin’s] the best bet because it’s been the most resilient. It’s around for 10 years, it has a great brand and it’s been tested a bunch.

As I look at all cryptocurrencies that could fill that role of being the native currency for the internet, [Bitcoin has] a pretty high probability.”

In the last analysis, we had mentioned the crucial descending trend-line, marked with yellow on the following daily chart. This line is ‘preventing’ Bitcoin from discovering new highs since June 26, when Bitcoin reached $13,880 as the 2019 high.

The resisting line was tested for the fourth time, and as it seemed like a breakout is knocking, it turned to be a false one – producing a decent red candle on the daily, with a wick above the line. The hit was hard: Bitcoin plunged $700 in a matter of minutes. Bakkt warehousing or not, we look on the charts, that tells the whole story.

This article provides a quick overview of how the crypto markets have been doing—with the focus on Bitcoin (BTC), Ether (ETH), Litecoin (LTC), EOS, Cardano (ADA), TRON (TRX), Dash (DASH), and Cosmos (ATOM)—over the past 24-hour period.

Overall, September 8th is proving to be quite a good day for the crypto, with only 13 of the top 100 cryptocurrencies in the red at press time (around 07:00 UTC).

In a Medium post released by the analyst, he says that the model allows them to make broad predictions related to the long-term future price of Bitcoin. The first one is that Bitcoin’s price will reach $100,000 per coin no earlier than 2021 and no later than 2028. After 2028, Bitcoin will never drop under $100k.

The second prediction says that the price of Bitcoin will reach $1,000,000 no earlier than 2028 and no later than 2037. After this year, the price will never drop below $1 million.

If it wasn’t for Bitcoin there would be no Libra. That much is self-evident, since Satoshi’s creation laid the groundwork for every crypto asset that’s followed. The extent to which Bitcoin was responsible for spawning Facebook’s currency has now been made brutally clear in an interview with Abra’s Bill Barhydt. The investment platform’s CEO claims that Facebook wanted to integrate BTC directly into its billion-strong social network – but was forced to create Libra instead due to Bitcoin’s inability to scale.