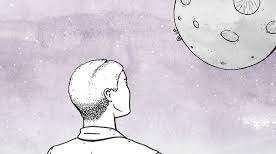 The lumberjack on the moon

A long time ago, a man went to the woods on a sunny Sunday morning to chop some wood. He made a large bundle of wood logs from the chopped wood, he threw it on his broad shoulders, and returned home. On the way, he met a hermit, who was gifted with magic powers. He stopped in front of the woodcutter and said to him, "Well, man, how dare you work on Sunday! Do you not know that it is written: six days you will work, but on the seventh day you will rest?"

"Come on," said the lumberjack, cursing, "I don't care if it's Sunday or Monday! If I want to work on Sunday, I'll do it." And with angry curse words jumping off the lumberjack his face, instead of the nice greeting, he wanted to walk away from the hermit.

The Hermit return the lumberjack from the moon and said to the lumberjack "six days you will work, but on the seventh day you will rest". The lumberjack pointed with one of the twigs he had left to the calendar and said "it is Sunday so you are not supposed to work are you, hermit" The hermit's face changed ones more from friendly to angry ones he saw that the lumberjack was right "well then I will return you to the moon and wait for tomorrow morning"

But before the hermit could swing his magic wand, the lumberjack swings his axe and chopped the hermit his head right off. and said to the villages "So now we can do whatever we want" and the villagers cheered him on and they threw a big feast to celebrate their freedom from the cruel and controlling hermit.