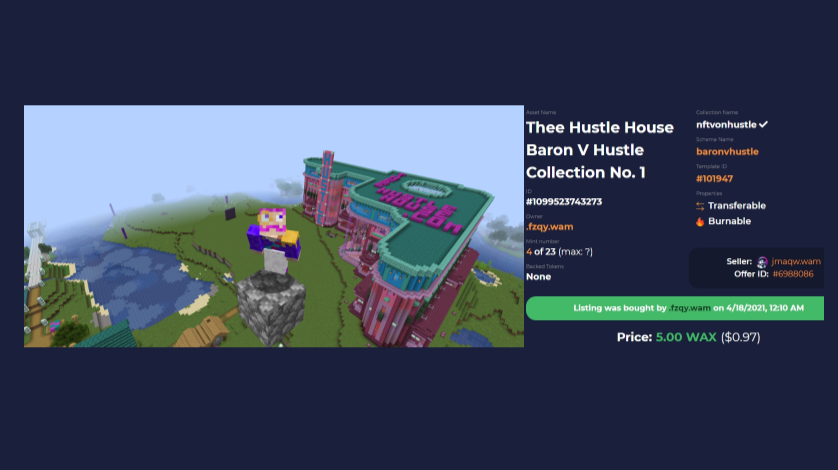 I'm now considerably more intrigued by The Uplift World after watching the preview video below from Thee Hustle House.

Minecraft is what The Uplift World operates with, which is very interesting. Blockchain gaming that feels like traditional console gaming is inevitable.

The Uplift World brings us closer to that.

I tried to figure out Minecraft a few years back, but it just never clicked for me. However, with the R-Planet cross-promotional land acquisition opportunity, I have ample incentive to give it another go.

This upcoming week, Topps will bring Major League Baseball NFTs (Non-Fungible Tokens) to the WAX chain. As a kid circa 1986, I got into MLB card collecting and Topps was my brand of choice. And nostalgia is a powerful force.

I still have a bunch of my mid-late 1980s baseball cards in storage somewhere, including a Cal Ripken Jr. rookie card. Most I purchased from E Gad's baseball card shop at the old Harding Mall in south Nashville.

If Topps ever brings Major League Soccer NFTs to the WAX blockchain, I would love to hype something for Nashville SC. Considering that I did some broadcasting for them in 2017, it would be fitting.

It seems the only true limit to all of this is the capacity of your imagination.

Here's a look at some interesting NFTs that I've encountered recently:

I'm not sure how close my land will end up being to Thee Hustle House in The Uplift World. That might depend on luck of the draw.

But my dynasty fantasy football league team is named the Hustlers, and a casino that reminds me of The Don CeSar in St. Pete Beach, Florida is right down my alley.

Just how nuanced can it get with NFTs and cross-promotion? Can you earn an NFT by visiting one parcel of land for a token and then redeeming it elsewhere? These are the questions I wonder.

And beyond that, how about NFTs earned from land in one game that you can use to get started in another?

That to me is the underappreciated long-term power of land ownership in multiple blockchain games. The ability to amplify and promote to a wide base.

The real NFT version has an animated image. I'm still trying to figure out the best way to spotlight NFTs on this blog.

I found this by looking for Bitcoin Elite NFTs for sale in the AtomicHub after learning they could be staked in R-Planet for 10 aether/hour. Aether is the in-game currency in R-Planet.

In a related note, nobody in the blockchain biz right now does cross-promotion better than R-Planet. Functionality is the future of NFTs.

That was the case yesterday with the Gnome Series, which caught my attention on a retweet that ended up in my feed.

I gave it a look and found that there was a Baseball Gnome for sale. Least expensive NFT in the series on the board at the time and it was a great fit, so I made the buy.

What's more, I ended up getting a free Mystery Pack by making the purchase. Normally I would just open the pack, but I've never tried holding an unopened pack on the blockchain.

So, for now, the mystery remains unsolved.

There is already so much great content out there, and new NFTs hit the market every day. And there's seemingly always something fresh/intriguing arriving on the blockchain.

The television news producer in me will forever be wondering, questioning, and hunting for the latest. And that makes for a convenient combination.


Collab with me! My contact info is available at NashvilleLou.com.