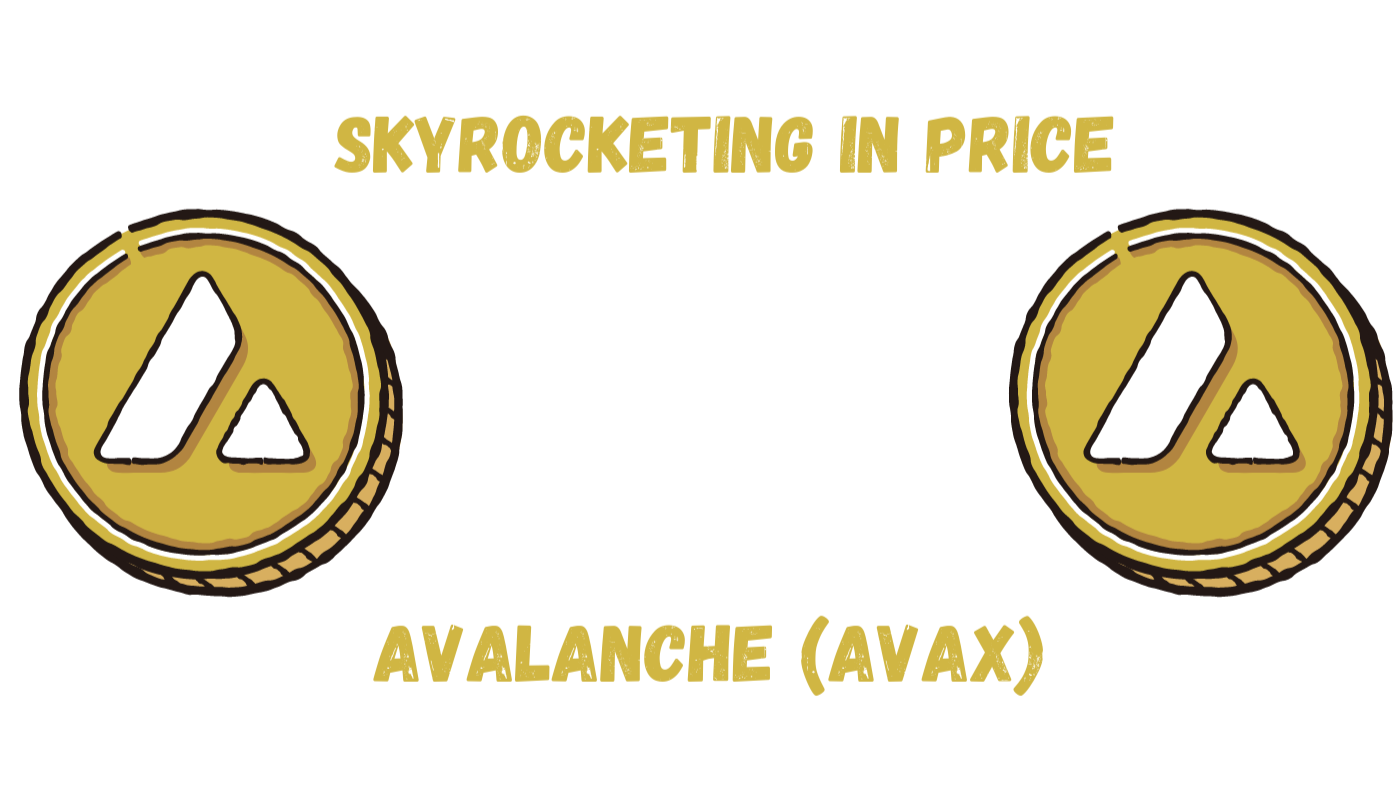 As the popularity of cryptocurrencies grows, innovation is needed to make transactions as smooth and seamless as possible. That is where avalanche in its native token, AVAX come in.
Avalanche is a relatively new blockchain, which was launched in September of 2019. It focuses on blazing high speed transactions and low costs. Emin Gun Sirer is the founder of this project. He is a Turkish American computer scientist, and Associate Professor of Computer Science at Cornell University, and the co director of IC3. In June of 2021. The Avalanche project made a private sale of AVAX tokens of around $230 million to cryptocurrency funds, including poly chain, three arrows company, liner capital, Collab currency, CMS holdings, dragonfly, our crypto fund among others.

A year later, Ava labs unveiled AVAX initial coin offering, which generated 42 million in less than 24 hours, avalanche launched its main net and began issuing tokens in September of the same year. All AVAX tokens are planned to be available for public purchase by March of next year. Avalanche sees the fragmented nature of the global crypto market as a major impediment. Currently, various countries are working on various financial systems and legislation. As a result, the smooth trading of digital assets can be problematic avalanche aims to solve this, it aims to create a unified global financial market, where users of the platform will trade digital currency in a frictionless way.

The proof of stake consensus algorithm is used in the project. This not only makes it faster, but it also uses less energy than some of the other exchanges out there. Avalanche's own consensus network Ava enables this while allowing users to build dApps to improve their platform further. Ava also enables users to set up their own although smaller networks with the necessary infrastructure. The avalanche network is home to cryptocurrencies like Ethereum, Bitcoin and others as well as NFT collectibles. It also supports peer to peer lending on its platform, which is a bit newer to the crypto market.

So how does Avalanche work? It consists of blockchains and Avalanche executes approximately 4500 transactions per second. Avalanche is considerably faster than other exchanges and coins due to the use of several blockchains. In the proof of stake system, the consensus mechanism of the Avalanche platform integrates prior consensus processes, such as the Nakamoto consensus from Bitcoin and classical consensus. This enables users and holders of the platform's primary currency, the AVAX token with both speed and security. They say that this is a big advance over previous systems. Next comes features and services. Avalanche provides a wide range of services. For example, peer to peer lending, trading, and the formation of sub networks all requiring AVAX tokens.

The platform's goal is to provide a seamless functioning experience across various financial assets and activities.

Avalanche as planned opens up plenty of new opportunities for blockchain developers and designers. Another step towards web 3.0, or the internet of money, as avalanche refers to its platform. The platform will serve as a central hub in exchange for both crypto and regular financial transactions in the future. But how are their competitors fairing, having one platform or several assets is a relatively new concept, Avalanche already has competitors.

Despite their recent collaboration, Ethereum is one of them. Ethereum, unlike avalanche will not provide this kind of flexibility. However, it has emerged as a key cryptocurrency for a variety of transactions, including stake. They also have Algorand, Algorand is perhaps more established than Avalanche, with many partners ranging from universities to big financial firms. However, despite its accomplishments, the former lags behind since it's solely focused on blockchain, while claiming to become the future of finance. Unlike avalanche the exclusive focus on blockchain limits the possibility that avalanche can bring through the use of a variety of asset classes. Then there's cosmos. It is a network designed for web 3.0. The platform, which is less focused on finance has 253 apps in its ecosystem, far more than either of the previous platforms mentioned. But this is bound to change. It may be trained to be web 3.0 at its own game, by marketing itself as the internet of blockchains. Despite this, it also hosts a plethora of other apps, which might make it appear cluttered.

There's a new application out there named Pangolin. Let's see what the hype about Pangolin is, Pangolin is a community built decentralized exchange (DEX) designed for Ethereum and now Avalanche providing access through a DeFi wallet. The Avalanche powered exchange allows users to swap coins posted on Avalanche and Ethereum Pangolin claims to offer a quick and inexpensive way to exchange these currencies, including its own governance token PNG avalanche will definitely be a part of the future of blockchain, and without a doubt, web 3.0 It isn't going anywhere anytime soon.

With Avalanche raising $230 million from the sale of it's native token AVAX alone and with funding from poly chain and three arrows capital are among those who have backed it, indicating that there is a considerable belief in it. With the release of its remaining AVAX supply early next year. In the recent spikes. Avalanche could overtake opponents in the race to a blockchain Internet of financial ease, as this appears to be their goal. While AVAX is new to the crypto industry, it is in high demand. Unfortunately, not all of the supplies in circulation, which raises the price, many investors are clinging to AVAX in the belief that avalanches success will enhance its price. However, if supply increases early next year, the value of the token may fall, coin market cap currently shows that less than half of all of the AVAX tokens to grab are actually in in circulation.

Nonetheless, the current price of the AVAX token makes it a good investment. This will remain the case until the remaining supply is released into the blockchain in early 2022. At this point, the hope is that the demand will drive up the price. However, in the realm of cryptocurrencies, this is far from a certainty if x price is sure to rise in the coming weeks as its popularity grows. How long will it take for this eventual pricing range from 80 to $150. Well In the next year, with its goal of uniting financial services, the tokens demand may rise as a result, a bigger user base may cause the price to rise.

So should you buy AVAX? That up to you, while it has been highly in demand, it could be worth looking into AVAX as previously said, increased use of the platform and its potential as a token for crypto investors might drive the price well above its current range. So if you plan to hold this crypto, there might be a potential for this to appreciate well in the long term. AVAX is traded on over 70 exchanges, including Coinbase, and binance. Many of these exchanges may not allow you to purchase cryptocurrency with fiat currency to trade for AVAX, you may need to first purchase another coin, the focus of AVAX could be appealing to a large number of people.

AVAX main attraction and selling point is the ease of movement and trading between different asset classes. If it does what it has set out to do on the internet of money, the financial world may reward them for it, but that remains to be seen. However, unlike some other platforms in the crypto industry, it is not a platform to jump on just because it has received a lot of attention. Avalanche is for those who find the financial world complicated to navigate, but this does not imply that the wider population shouldn't use it, if the future of finance is to cause an avalanche that it might be worth it.

Another reason for the skyrocketing prices of the AVAX tokens is the deflationary nature of the blockchain. The network collects fees from various actions and services such as blockchain creation, staking, and transactions. These tokens are then burned, which in turn decreases the total number of AVAX coins in circulation. Therefore controlling demand for tokens and stabilization, and Avalanche's AVAX price can be done in the future. The inclusive nature of the avalanche blockchain, in addition to its technical aspects, makes AVAX stand out from the rest in the sector. It is the unique features provided by this network that makes it best suited for the enterprise level blockchain creation with more and more Ethereum developers continuing to find more cost effective alternatives, the demand for the avalanche project will increase significantly.

Now you have a more in depth knowledge of what Avalanche (AVAX) is.

I am a writer coming from various different website where I have published short articles and posts about mainly financial topics. However from all that I have talked about it seems cryptocurrency always pulls me back in.

All topics cryptocurrency and finance. From play to earn to in depth talks writes about specific coins. Profile: https://www.publish0x.com/@MauriClover Website: https://www.myonestopmoneyspot.com