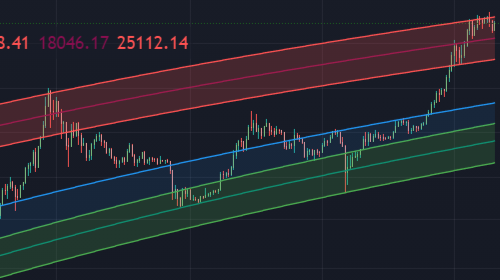 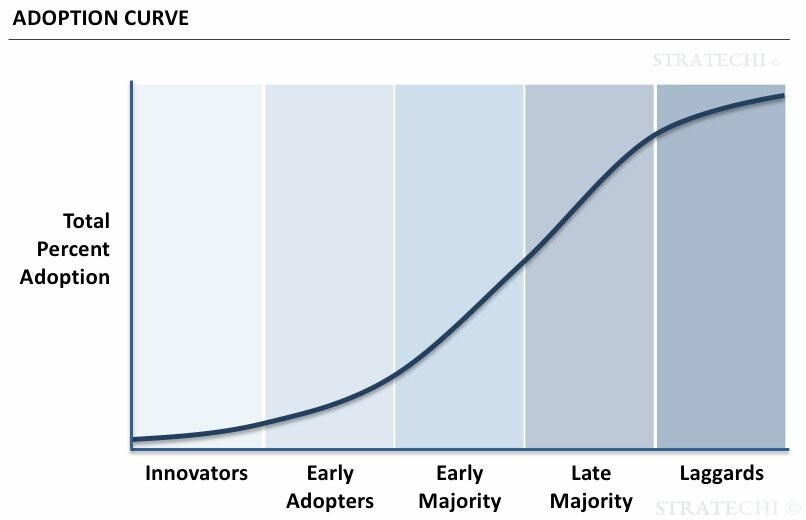 Logarithmic growth curve, further (“LGC”), is essentially a mirror image of adoption curve aka S-Curve. When an emerging technology or asset is undergoing adoption it generally follows S-curve or Metcalfe’s law.

Here is an example of Zoom’s projected market share since Covid-19: 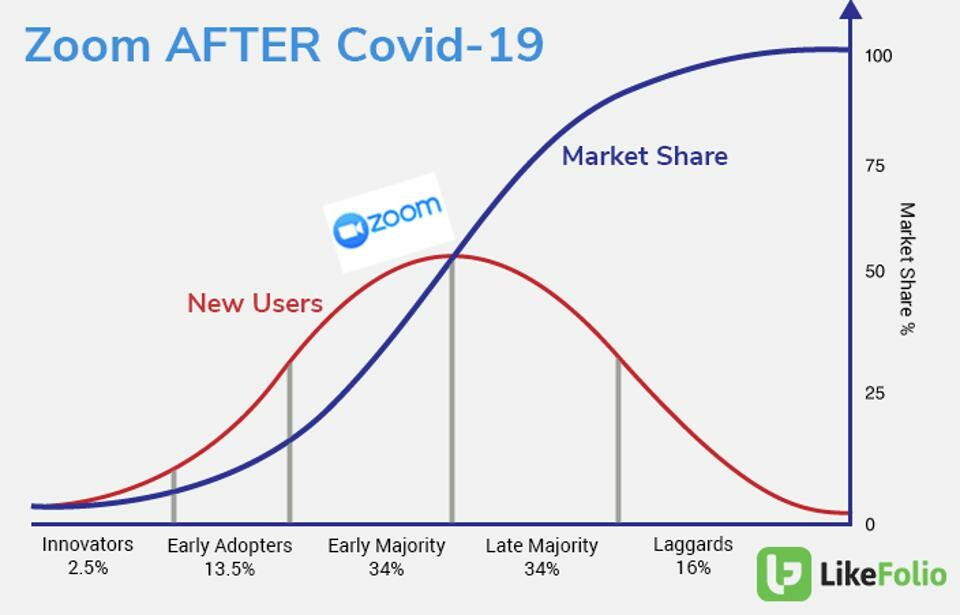 At the end of the adoption, the S-curve flattens because there are no more new users or the inflow is too low to create a significant deviation from the mean. In case of Bitcoin, we assume that the number of users will translate into the network’s value (and it historically has been so) through increased demand and/or scarce supply of Bitcoin.

During the past decade Bitcoin has been following adoption curve/Metcalfe’s law more or less steadily, however, with one peculiar property. Since Bitcoin’s network growth is directly expressed in monetary value it is prone to speculative episodes i.e. bubbles. 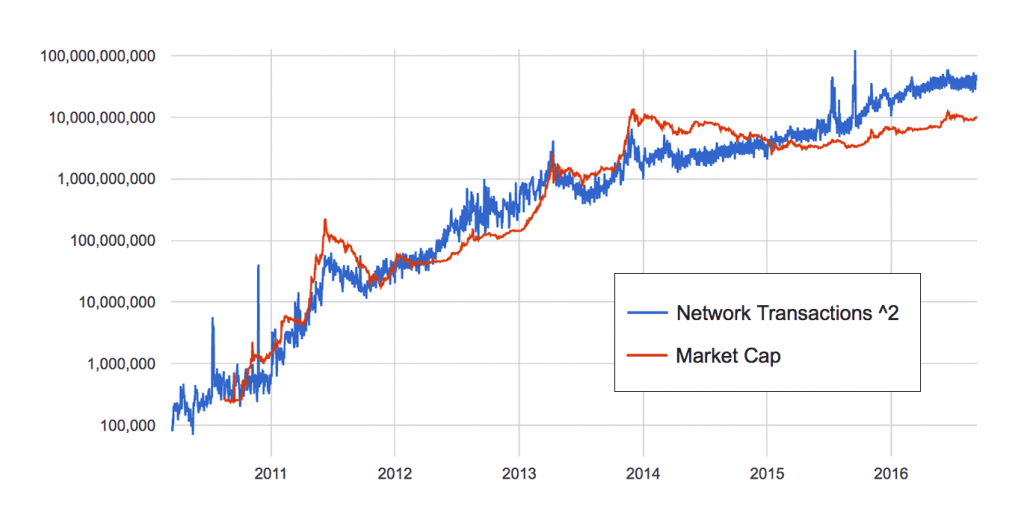 LGC allows us to establish the fair value of Bitcoin through accumulation of historical data points that are taken as “the bottom”. Similarly, “the top” or the ceiling of the LGC channel is estimated by relying on previous extension/bubble peaks. Using S-curve as the foundation for our analysis it is evident that an overextension (a bubble) from the fair value of Bitcoin can never exceed (extremely unlikely) its previous extensions in magnitude as bubbles decline in size along with the asset’s maturity (more mature = less volatile = S-curve flattening). Simple logic here is that it takes a lot more money to move a larger market cap.

Here are all the historical overextensions (bubbles) to show that with time there is a consistent decline in the magnitude of each extension from the fair value and therefore diminishing returns. 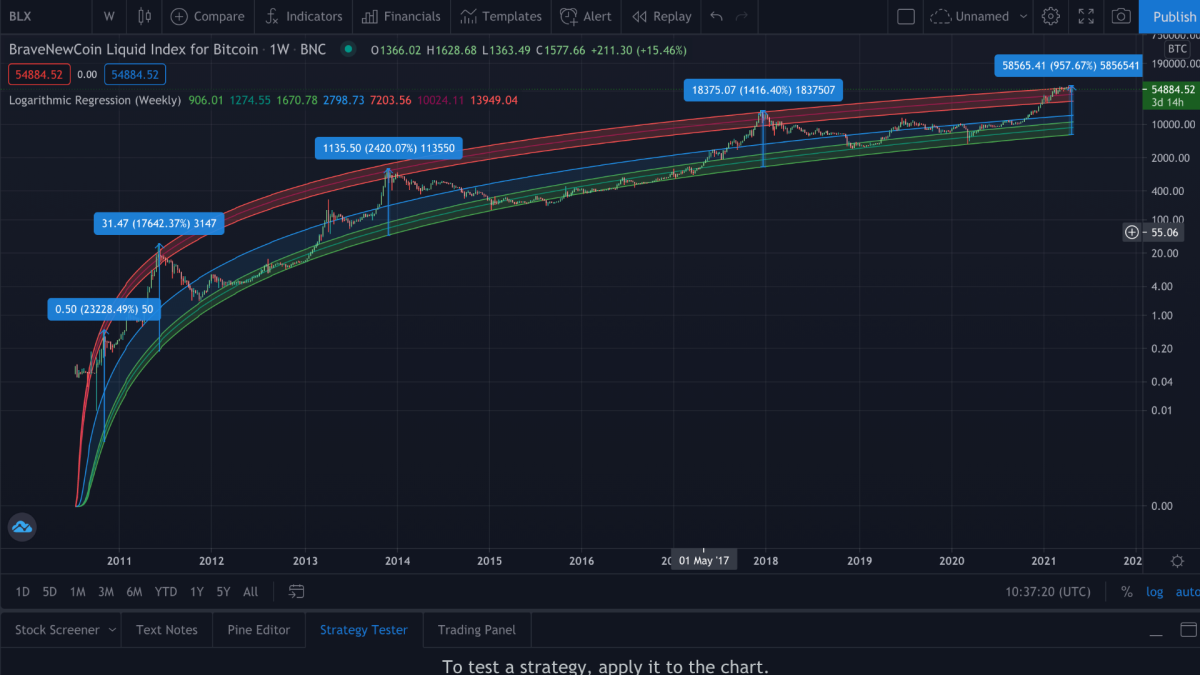 Moreover, “the bottom” also seems to rise, possibly because Bitcoin users’ confidence grows while the adoption progresses and therefore they are unlikely to sell at times of panic/market crash thus pushing “the bottom” up. (perhaps these are just unnecessary semantics and the narrowing of the LGC channel should be the main focus).

A few market analysts refer to Bitcoin’s overextensions as cycle peaks. I personally have seen quite a few arguments on the definition of a cycle but I have not found any suitable criteria that could be used to define a cycle (apart from periods between each halvening perhaps) that would help me to convey my message therefore, I chose to focus on overextensions from the fair value i.e. bubbles.

Having seen plenty of unrealistic Bitcoin price targets, I decided to address this issue and demonstrate the absurdity of most of those predictions. Some of them are based on incorrect LGC indicators, which do not account for S-curve flattening or in some cases the degree of flattening is insufficient.

Here is an example of a LGC lacking flattening and going to infinity: 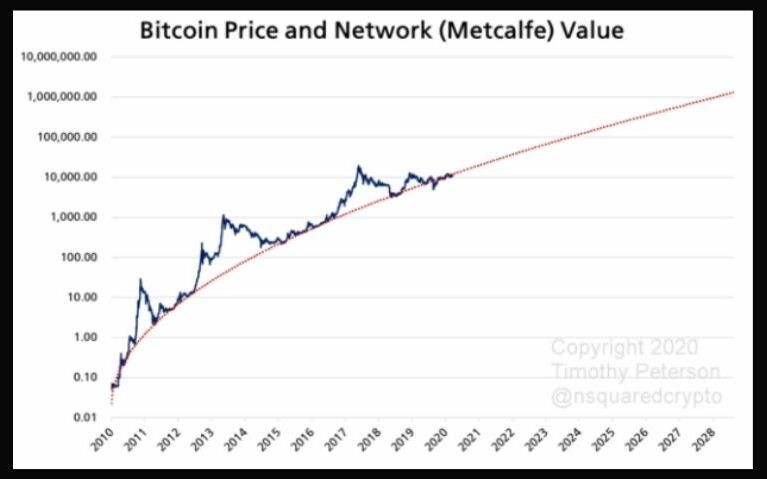 Here is the chart with proper s-curve flattening:

(chart F by dave the wave)

As I have demonstrated in the chart D, overextensions (bubbles) decrease in magnitude over time thus at any given time we can calculate whether a particular price target is feasible by using a few variables:

Here is a breakdown of the unlikelihood of $150k Bitcoin by June:

(this price target was forecasted by a crypto community leader)

Projected Bitcoin’s fair value at the time is ~$6588

Projected Bitcoin price of $150k in June implies a whopping ~2176% overextension from the fair value, which exceeds the peak of the last peak/bubble thus making the target price implausible.

It goes without saying that some of the data here has some leeway and as time goes by and more data points are collected we can improve LGC’s precision and consequently strengthen its predictive power.

It is my hope that this piece will help you understand some of the market behavior, make rational decisions and avoid becoming a victim of narratives and etc.

None of this should be considered financial advice and it is purely for educational purposes.