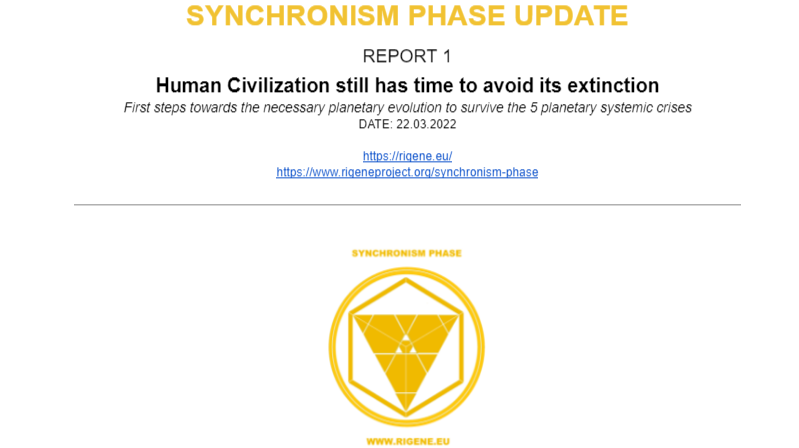 One month after the start of the synchronism phase (22.02.2022), important human progress is outlined in relation to the functional process for the synergistic and synchronic collaboration of all the peoples of Planet Earth to achieve the World Union.

From the monthly monitoring we report the following events:

The pressing priority is for all parties to work together to promote dialogue and negotiations between Russia and Ukraine, cease hostilities as soon as possible, and avoid civilian casualties, in particular, preventing a worsening humanitarian crisis, Wang explained.

An enduring solution, he continued, would be to reject the Cold War mentality, refrain from bloc confrontation and build a balanced, effective and sustainable security architecture for the region to realize the lasting peace and security on the European continent.
https://youtu.be/3jwPAh8a_N8
http://www.ecns.cn/news/politics/2022-03-20/detail-ihawuesq7010056.shtml

- The European Commission has put forward a Communication on the European Growth Model that recalls the common objectives the EU and its Member States have committed to with respect to the green and digital transition and to strengthening social and economic resilience. The document acknowledges that the European economy is undergoing unprecedented transformations in the context of major uncertainties linked to the global and security outlook and confirms the need to work closely with all relevant actors, including the EU, Member States and the private sector, to reinforce its long-term sustainable growth agenda. To do so, it sets out the key investments and reforms that are required to achieve the EU’s common objectives.
https://ec.europa.eu/info/business-economy-euro/growth-and-investment/european-growth-model_en

- “Now more than ever we need a strong and efficient United Nations system, capable of delivering peace and prosperity to all and of adapting to changing needs”, the Italian Permanent Representative Maurizio Massari said today to the General Assembly during a meeting convened to discuss Secretary General Antonio Guterres platform, Our Common Agenda.

Russia’s invasion of Ukraine compels Member States of the United Nations to unite in “cooperation and solidarity” to support all those impacted “and to overcome this violation of international law” said Guterres on addressing the General Assembly in New York. Today was the fifth and final Assembly-led consultation, and Mr. Guterres thanked all Member States for their “constructive and active engagement” together with all other stakeholders who have contributed to the themed discussions.

The meeting aimed on enhancing international cooperation – part of the landmark blueprint for multilateralism and collective action going forward, launched last year. Peace is the most important global public good and the United Nations was created to deliver it”, Guterres said, noting that the meeting was taking place in the shadow of Russia’s invasion of Ukraine. “War brings death, human suffering and unimaginable destruction, at a time when we cannot afford to add to the major global challenges we face. This conflict also calls on us to come together in cooperation and solidarity to support everyone affected, and to overcome this violation of international law”, he added.

Mr. Guterres said if we are to bequeath “a world free from want and fear, and full of opportunities to fulfil their potential, we must urgently focus on building and strengthening the foundations of the multilateral system”. He added that his Common Agenda report is “a wake-up call about the risks we face and the dangerous fiction that the status quo is a viable option. But you don’t need to read my report to wake up. You just need to look around: The climate crisis has passed the point of no return – even though we had plenty of warning and could have acted earlier. Much of the impact of the COVID-19 pandemic could have been prevented or mitigated. Instead, millions of people have died, hunger and poverty are rising, and the economic impact of the pandemic is still playing out”.
https://www.onuitalia.com/2022/03/10/our-common-agenda-italy-now-more-that-ever-we-need-strong-un-system/?utm_source=mailpoet&utm_medium=email&utm_campaign=week-in-review_60

- UN chief of political affairs Rosemary DiCarlo told the Security Council that the war in Ukraine is “the most severe test” the Organization for Security and Cooperation in Europe (OSCE) has faced since their creation, adding that “the Russian invasion has shaken the foundations of the European security architecture to its core.”

Addressing the Security Council today (14 Mar) in New York, DiCarlo said, “as we meet, the bloodshed continues to worsen. Russian forces have now launched deadly strikes in the west of Ukraine. Ukrainian cities are under unrelenting shelling and bombardment, with many civilians killed daily.”

The chief of political affairs also said that her office is “deeply disturbed” by reports that Ukrainian municipal officials in Russian-controlled parts of the country have been abducted, adding that there are also reports of civilians, including journalists, being targeted, allegedly by Russian forces.

DiCarlo reiterated, “we must not allow any questioning of the sovereignty and territorial integrity of Ukraine within its internationally recognized borders. Such questioning would be inconsistent with the United Nations Charter and relevant Security Council and General Assembly resolutions.”
She continued, “amid these dire conditions, the United Nations continues to scale up not only its humanitarian support to the people of Ukraine, but also its engagement with key partners like the OSCE in support of an immediate ceasefire and a lasting diplomatic solution.”

DiCarlo highlighted, “how the OSCE and other regional actors choose to secure the future of European security cooperation will have an impact beyond Europe.”

She continued, “the UN supports all efforts to restore mutual trust and respect among regional stakeholders, which is essential to preserving the continent from new conflict and the world from further instability.”

She reiterated, “we, therefore, all have a stake in the outcome.”

Polish diplomat Zbigniew Rau spoke at the Council as the Chairperson-in-Office of the Organization for Security and Cooperation in Europe.

He said, “the war is against the interests of Russia and the Russian people and leads itself to isolation. We expect the Russian side to honor its international obligations and commitments. And a sustainable political solution must fully respect sovereignty, territorial integrity and independence of Ukraine within its internationally recognized borders.”

He added that the door to diplomacy is still open and called on Russia to “engage in a meaningful and substantial dialogue to seek a peaceful solution to the current crisis.”

The Polish diplomat also said, “we will continue to call on all sides of military conflicts to abide by humanitarian law and to refrain from activities directed against civilian population and the infrastructure.”
He reiterated, “we OSCE stands ready to cooperate closely with UN humanitarian agencies to facilitate and provide the necessary assistance. These matters also include creating effective evacuation routes for the civilian population.”

Russian Ambassador Vasily Nebenzya told the Council that the point of the work of the Chairperson-in-office is precisely to solve disagreements between participating States and to bring positions closer, adding that “it is in no way to take biased steps which further inflame confrontation. And especially not to head up an anti-Russian campaign in the OSCE.”

The Russian Ambassador also said that the UN over recent days “repeatedly drawn attention to the topic of mediation in conflict. What type of mediation can talk about when you obviously have picked aside in this conflict?”

Ukrainian Ambassador Sergiy Kyslytsya underlined the need to “explore all OSCE tools to document Russian crimes, and to ensure public and timely reaction by the Chairperson-in-Office, special representatives and the OSCE autonomous institutions.”

He said, “we expect the [inaudible] to be vocal on the cases to flagrant human rights violations stemming from the Russian aggression against Ukraine.”

Ambassador Kyslytsya continued, “Russia is intensifying its propaganda and disinformation campaign and we consider that the OSCE representative on Freedom of the Media has to pay close attention to Russia’s false narratives.”

He appreciated OSCE’s “strong stance against violations against journalists, which remains an element of the Russian aggression.”
https://youtu.be/q5U87n96Yw8

- In response to the Schiller Institute petition "Convoke an International Conference to Establish A New Security and Development Architecture for All Nations," Prof. Fabio Massimo Parenti Associate Professor of International Studies, CFAU, Beijing, urges people around the world to support the idea and execution of a conference with the intention of creating a new global security architecture. Mr. Parenti is one of over 120 prominent signers from around the world to the Schiller Institute's petition.
https://youtu.be/ICEvufFQsRg
https://schillerinstitute.nationbuilder.com/convoke_an_international_conference_to_establish_a_new_security_and_development_architecture_for_all_nations

- Food systems are complex and currently unsustainable for people and planet. Delivering food systems that are inclusive, equitable, sustainable and healthy will require higher levels of cooperation and collective action at country and regional level alike.

The World Economic Forum is the International Organization for Public-Private Cooperation. The Forum engages the foremost political, business, cultural and other leaders of society to shape global, regional and industry agendas. We believe that progress happens by bringing together people from all walks of life who have the drive and the influence to make positive change.
https://youtu.be/dpu5zE1eNi4

- Launching the Blue Food Partnership | Sustainable Development Impact Summit
Blue food has a major role to play as the main source of protein for some 3 billion people, with global seafood consumption doubling over the past 50 years. What are the most promising approaches to enable sustainable aquaculture and produce nutritional and economically viable blue food? Speakers: Kristian Teleki, Heather Clancy, Chris Ninnes, Árni Matthias Mathiesen, Shakuntala Thilsted

The World Economic Forum is the International Organization for Public-Private Cooperation. The Forum engages the foremost political, business, cultural and other leaders of society to shape global, regional and industry agendas. We believe that progress happens by bringing together people from all walks of life who have the drive and the influence to make positive change.
https://youtu.be/aJxFzgxEZSs
https://www.weforum.org/events/sustainable-development-impact-summit-2021/sessions/launching-the-blue-food-partnership

- Climate Youth Champion from Kenya | Green Generation Initiative | Voices of Change | United Nations
In the lead up to the UN Climate Change Conference (COP27) in Egypt in November 2022, a new video series, Voices of Change, features ten interviews with some of the world’s indefatigable climate activists, looking at their courage to persist against all odds, while advocating for change and solutions to protect vulnerable communities and our planet. The second interview in the series features Elizabeth Wathuti, a climate activist from Kenya. She is also the UN Green Climate Fund’s Climate Youth Champion and the Founder of the Green Generation Initiative.
https://youtu.be/EYSR7g-JsvE 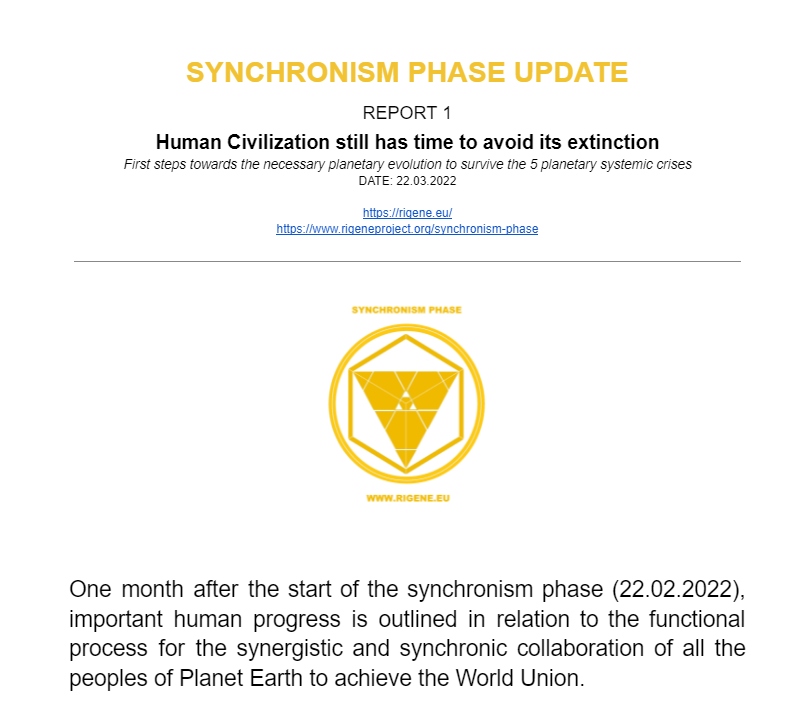 Together we develop new innovative ideas to accelerate the development of the Crypto economy, blockchain, tokenomics, and 4.0 technologies to improve the lives of all people.