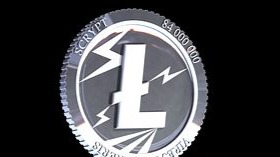 Is Litecoin the future of Cryptocurrencies?

The one that tries to fix all of Bitcoin's flaws.

Litecoin,for those who don't know,is a hard fork of Bitcoin which aims at improving speed of transactions,and being a lot less volatile than Bitcoin (or at least trying to).

[Ps: this is a side note,but if you don't know what a hardfork is,it is when a community decides that they don't like the way a certain Cryptocurrency operates,and decide to create their own version,but still based on that cryptocurrency's blockchain. It's an easy way to get free crypto,as when the community splits off the original one,you get to keep both the original and forked versions,if you were originally holding the original one. ]

Litecoin is also limited,but the number of litecoins that will ever be created is 4x that of Bitcoin,at 84 million.

The main differences between litecoin and bitcoin is the fact that Litecoin enables faster transactions(up to 2.5x faster than Bitcoin's in theory), and it is much cheaper to obtain(at around 30% of Bitcoin's price).

Ok,that was a brief history of Litecoin.

To me,the answer is a straight no.

And I'll tell you why.

The Litecoin system is much,much easier to game than the Bitcoin system.

Imagine if a hacker wanted to game Bitcoin's system so that he could spend the same bitcoin twice.

Well,he'd have to get ALL the computers on the blockchain to agree with his transaction.

Which is just plain impossible,because if you mine Bitcoin,your computer contributes to the Blockchain,and he'd have to find you and somehow convince you.(the sound of that is absurd even)

But on the Litecoin side of things,he'd only need to get a large number of miners to agree with him.

If there are corrupt people in the system, it'd be easier for him.

The main reason why Litecoin doesn't constitute the future to me is because it is relatively easier to game the system.

Sure,Litecoin gets better by the day.

It's faster. It's transactions are cheaper (1/1000 of a Litecoin is taken as transaction fees), it's easier and cheaper to mine,and it was created to be better than Bitcoin.

But while that problem persists,I can't see it as part of the future of Cryptocurrencies.

At least not for me.