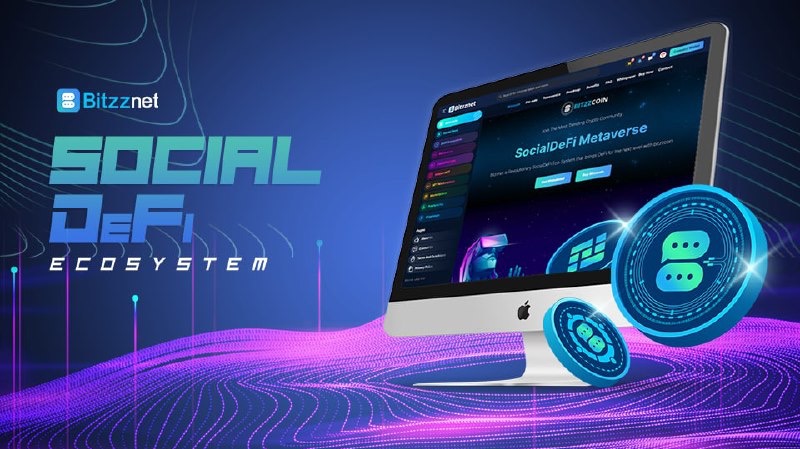 However, crypto skeptics may feel the need to possess a high degree of technical knowledge to understand this world. The market may fall into the trap of ignoring the web 2.0 users, missing on relevant potential.

Bitzznet, a project headquartered in the United Arab Emirates, aims to alter that. Our short and impartial overview will analyze the initiative’s vision and features in the following sections.

In a nutshell, Bitzznet is a Social DeFi network. An integrated social media network and DeFi Ecosystem are at the core of this initiative.

Users of Bitzznet may connect, share, and communicate with one another in a purely social media network style. The project bets on its monetization capabilities, allowing users to earn money through content creation and subsequent community engagement.

The following sections will allow us to spend more words on the project’s ecosystem and its main features.

The Intention of Bringing a Self-Sustaining Ecosystem into the Project

The social aspect of Bitzznet wishes to reach decentralization through a DeFi ecosystem. Users will be able to trade, exchange, and swap currencies on a Decentralized Exchange (DEX).

The ecosystem relies on three tokens:

The liquidity pools attempt to guarantee that the entire exchange system has enough liquidity. Investors in the liquidity pool, according to the team, can produce several streams of income for the community.

Using a Decentralized Automated Organization (DAO) is a typical strategy in the blockchain sector. The fundamental objective of the DAO is to ensure the effective governance of the buyback fund and the treasury fund to optimize the fairness of transactions. The platform's investors are in control of the modifications to its internal mechanism.

Bitzznet's platform seeks to extend the concept of advertising on a decentralized network by utilizing Adspot NFTs. The community can buy these NFTs to obtain a share of the revenue the moment an advertiser purchases the ad.

In other words, holders of the Adspot NFT can obtain a passive income. Being NFTs, users can sell or exchange each Adspot on the portal.

An NFT marketplace is available on the Bitzznet ecosystem. NFTs are receiving enormous hype, so it is not surprising that the team decided to bet on this technology.

The goal of CryptoEye is to provide a portal for all blockchain-related services. The mechanism will include marketing tools (such as Airdrops and AMAs), a crypto launchpad, and a rating system for existing and future blockchain initiatives.

SkillNet aims to become a digital place to sell and hire Web 3.0 services.

The project should include all the features above in a Metaverse designed by Bitzznet’s team.

How Does Bitzznet’s Tokenomics Work?

Each operation on the platform will come with a 10% transaction charge. The fee will be split among a buyback fund, revenue distribution to investors and holders, marketing operations, and a treasury fund. The Bitzznet community will have access to the following liquidity pools:

One can look at the whole system’s architecture from two points of view:

Both users and investors can take full advantage of this decentralized exchange (DEX) system. Crypto enthusiasts are generally very familiar with the benefits of joining a DeFi ecosystem, such as:

Bitzznet’s official website and social media accounts may be accessed by anybody who wants to remain updated on the project (Discord and Twitter).

The project’s fully-doxxed staff is on a mission to bring about a blockchain revolution. By participating in the $BTZ private sale, the market will have the opportunity to evaluate Bitzznet at a 40% discount.