Is it a good time to invest in Ethereum?

Ethereum is a platform that has been escalating in the cryptoverse, it is based on a blockchain technology very similar to that of Bitcoin, but unlike it, it uses smart contracts that allow the creation of decentralized applications or dApps. This has allowed its cryptocurrency called Ether (ETH) to rank second as the most robust cryptocurrency on the market after Bitcoin.

In recent days, cryptocurrencies have had a drop in value; however Ether has had a better performance, managing to recover much faster than Bitcoin (BTC), which outlines it as the cryptocurrency that could arrive to surpassing Bitcoin in the near future. The use of dApps has given it more reliability which translates into greater liquidity in recent years, this makes it more attractive for many institutions and entrepreneurs, who in view of the economic crisis those countries have experienced worldwide have decided back your capital with a large investment in this crypto.

It has been observed that as the price of Ether increases, there is a fall in the offer in the exchange houses, as it is scarcer, this also causes its price to increase. It should be noted that currently it is easier to buy a full ETH compared to the price of BTC. According to analysis by Sam Bourgi published on the page of cointelegraph.com "Ether is now the 33rd most valuable asset in the world, quickly surpassing the precious metal, platinum, according to the comparison website CompaniesMarketCap.com".

It could be speculated that the shortage in the Ether offer is due to more institutions having been encouraged to buy it to protect their finances. And it is that every day the interest in decentralized finance DeFi increases, such is the case of the European Investment Bank (EIB), which has just announced the issuance of blockchain bonds based on Ethereum. This has given ETH a boost and keeps it at its highest all-time high. For its part, the Toronto Stock Exchange launched three funds traded in ETH.

However, the cryptocurrency market is unstable, as well as the Ether can maintain the uptrend it can also go down. If the behavior and liquidity that Ethereum currently has is analyzed, it can be deduced that it is still a good time to make investments in ETH in the medium term, since it is expected that by the middle of this year Ether will reach a price that will pass $ 5,000 showing substantial gains. If we add to this that with the Ethereum update scheduled for next July, it is estimated that the commissions or gas prices will be lower; this makes it a very attractive investment option.

In the following graph you can see the behavior in the price of ETH / BTC: 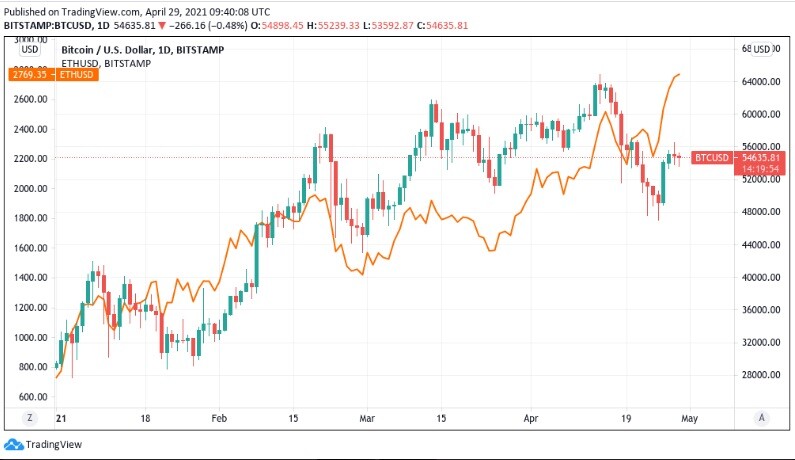 The information presented above is not intended as financial advice at any time, if you want to make an investment in cryptocurrencies you must first do your own analysis and make sure you understand the world of cryptocurrencies.

Do not forget to leave your comment below and indicate your weighting regarding the article.