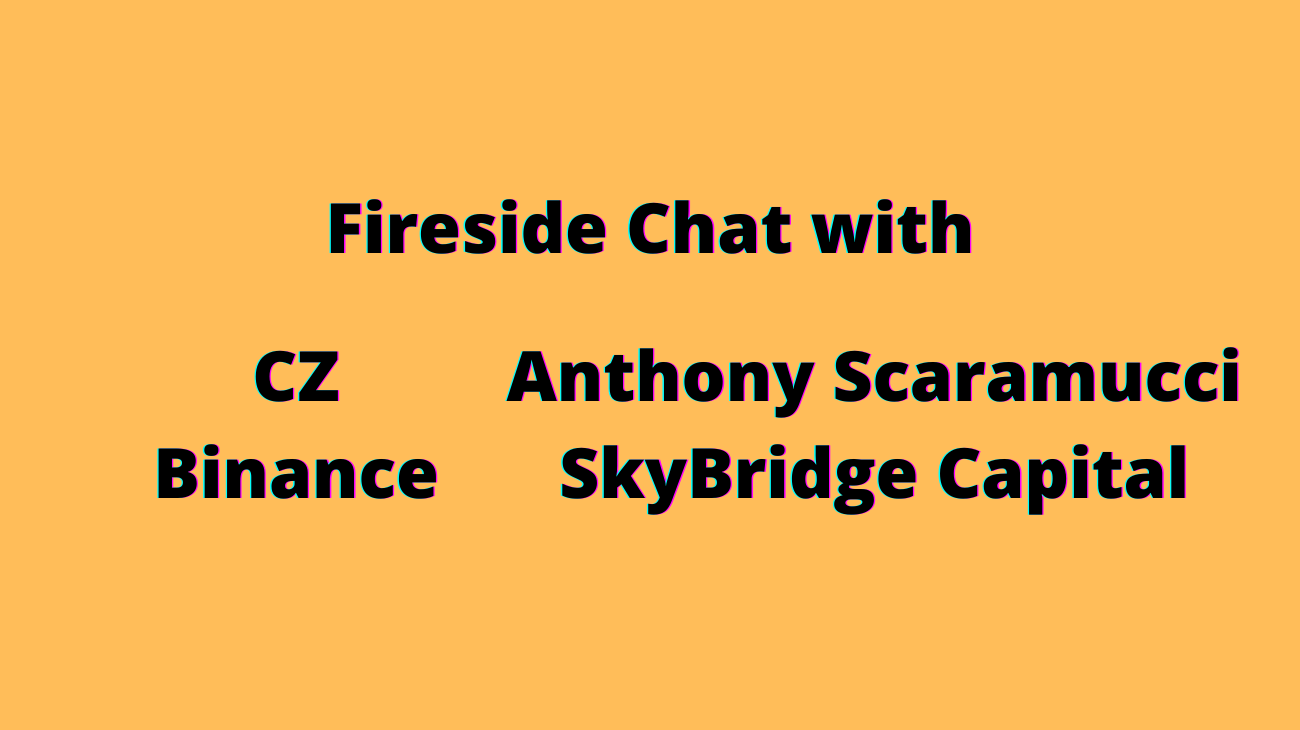 Conversations with others is always a valuable experience and provides learning opportunities on many levels.  Check out this write-up with CZ & The Mooch - A Fireside Chat about Bitcoin and other things.

Overview of the Fireside Chat

Christophe, Director of Institutional Business EU at Binance, recently moderated a conversation with CZ who is the CEO of Binance along with Anthony Scaramucci whom many may remember for his short tenure in the Donald J. Trump Administration and still Founder and CEO of SkyBridge capital.

In just over an hour both CZ and AS covered everything from cars to Bitcoin & along the way shared some valuable nuggets that are sure to help everyone who pays attention.

Following are the questions that were presented by Christophe, sometimes to both AS and CZ and sometimes to just one.  Nevertheless, it was a great conversation.

The video is also provided at the end of this article if you would like to watch instead.  Now on to the questions.

Q. Tell us a little about your experience and first coming into crypto as well as thoughts around BTC.

AS - With over 30 years of experience in trading and currently $8 Billion under management in SkyBridge Capital, Anthony Scaramucci is a force to be reckoned with.  He understands the inns and outs of the market but was careful to talk about when he first came into the crypto space.  He described what he called when he  reached his "eureka moment" in July 2020.

After brief encounters with the topic of blockchain and cryptocurrency, he started to do what he does in his current industry and that is; follow the money.  He very quickly realized and came to the place that Bitcoin is absolutely a store of value.  With an amazing added bonsu; it is digitized.

He talked briefly about how BTC operates in an adopted price pattern. mHe compared it to Tesla, Facebook, Amazon, Google in terms of the topic of following the money.  If you followed the market capitalization of each of those companies at the time when they were coming online you would see a similar massive growth.

He said that overall bitcoin is a decentralized monetary network with its best moves are still ahead of it.

CZ - He agreed with the majority of what AS was saying. CZ highlighted that when you look at any asset that is traded, the price will go up and down.  It's a matter of mass psychology.  He thinks now and even longer term that we are still in a total BTC bull run.  Retraces are important, which creates resistance and support levels.

How Did you Stumble into Crypto and Perception of Change over time.

AS - He made a laugh when he talked about his "tortuous time in politics".  As a transition chair he was present for a high level conversation around crypto regulation and ultimately learned about the crypto space.

Oddly enough, he wasn't interested in lower price levels. He specifically talked about BTC at the 3 and 4 thousand dollar levels even after the 2017 ATH of nearly $20k. His reason was simple.  There wasn't the energy there is today and BTC did not have as many followers.  Now that market cap is high enough it will maintain velocity.

CZ - After first learning about BTC in 2013, CZ did the sensible thing that any person would do.  He quit his job to learn the industry, he sold his house in 2014 and put everything into BTC when the price was around $600.

He still has his original BTC today.

Today do you focus on Crypto only or diversify across other assets?

AS - He wanted us all to know that he is Italian, so he has to have a cars. While it was slightly in jest, the comment came after CZ had talked about living simply and not having many creature comforts.  AS continued on by saying that

With all of that being said, he did elaborate on the fact that all of his money is in Skybridge in the funds as well as the Bitcoin Fund.

CZ - For the CEO of Binance, the answer was simple.  He holds 2 coins.  BTC and BNB. He made a great point about not being interested in other assets because they are depreciating in reference to cars and anything else.

All of his investments are done through Binance and nothing personally which makes everything really clean in the books.

What are your thoughts about Gold v. Bitcoin?

AS - This question only went to Anthony and he basically said that he "wouldn't knock" gold or other stores of value, yet he shared more.  Because of the portability, ease of transfer and numerous other benefits he saw BTC as valuable or even possibly superior.

More importantly, he added that he thought a generational observation was needed in regards to BTC.  Newer generations see BTC as the answer or solution to value.  He mentioned his oldest son who is 28, so he has a good test case right in front of him.

Can you tell us a little about the SkyBridge Bitcoin Fund

AS - The fund is very new and has only been around this year.  Recently Skybridge had a call, that AS referred to as a logistical failure that he admittedly was at fault.  He said that typically they has a Zoom subscription for a couple hundred callers so he doubled it and added some more and thought that 800 spaces would be enough.

The interest was so high they had to do another call as well.  The fund is now around $100 million and on January 4, 2021 was opened to outside investors.  Without going to far into the details he did mention the fund has a 3-month lockup period and that his hope was investors would treat the fund as a buy and hold asset as opposed to short term flipping opportunity.

Tell us a little about Binance

CZ - The CEO of Binance shared a little bit about the different offers from retail to institutional clients and customers.  What was really interesting was some of the technology that had been developed.

For instance for someone who was interested in blocks or larger sizes of acquisitions he talked about how the exchange would provide quotes and take the user directly to an OTC desk or representative that would help effect the transaction while maximizing funds for purchase.

Where does Crypto go in 5 years.

CZ - The Binance CEO was really quick to answer this question.  He said that the numbers we should be seeing is $50 to $100 trillion marketcap in 5 years.  Bigger than the stock market. It was just that quick.

AS - Total agreement.  He had nothing but love for CZ's statement.  He even tried to describe the situation a little differently. For example, in 5 years if it goes from 1 trillion to 10 trillion.  This will be an unbelievable opportunity.  With that move it would only be 20% of what CZ was talking about but the bigger movement would be huge overall.

AS - In 2021 AS is keen on avoiding COVID19 and wants to keep his hair. On a professional level he is operating with a larger goal to expand SkyBridge digital product offering as well as scale the BTC fund offering.

CZ - Thinks 2021 will be very explosive year with the biggest goal is to keep up with the demand. He says that with everything that is going on right now, it is amazing how the demand just keeps growing and growing.

Who is your biggest inspiration?

AS - His biggest inspirations have come from his grandparents.  They were immigrants to the U.S. and realizing the risk they had to take and what they went through. At the time in the country when there was opportunity if you were willing to roll up your sleeves and get it done.

"If you can't afford a ticket, don't go to the movies"

He recommended a favorite book: Meditations by Marcus Aurelius.

CZ - His inspiration was gleaned from his father whom with he immigrated to Canada when he was 12.  So he saw family working trying to make means to get by and that inspiration pushes him to thinking about how to decentralize Binance.

Both AS and CZ had great book recommendations and said that they had both published their book reading lists.  You can find them at these links;

Here's the link to the video if you want to watch it all the way through at just over an hour in length.