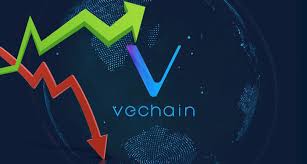 VeChain presents excellent ROI in the short and medium term.

The crypto market has returned to signs of recovery as the end of the first week of June 2019 approaches. The fierce attack of the bears at the beginning of the month does not seem to have enough fuel to persuade an ecosystem that remains reluctant to make room for a new crypto winter.

For now Bitcoin and the main altcoins of the top 30 of the crypto market are beginning to clear the red tide and become increasingly green, with excellent performance for some as VeChain, which already has symptoms of being bullish for the next few hours.

At the time of writing, the cryptocurrency has a quote of $ 0.007968, + 7.78% in the last 24 hours with a MarketCap of just over $ 440 million dollars that keeps it in the 26th place of the general ranking of cryptocurrencies , according to CoinMarketCap.com.

The VET / BTC pair dominates the market share in the Binance exchange for VeChain, followed by the pair anchored to the USDC stablecoin.

In the short term, VET presents an ascending triangular pattern with strong key support at point 'B' of this pattern which is also coincident with EMA 30 Days. 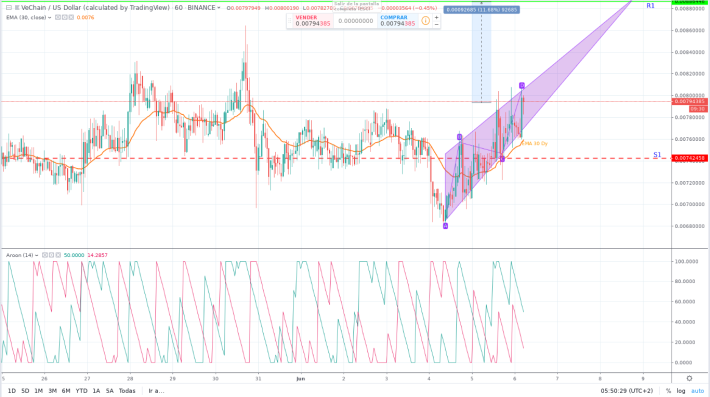 The Aroon indicator is bullish since its bearish signal has begun to go to the fund in parallel and with greater force than its counterpart.

The short-term strategy would be to take long and short positions to guarantee profit in both directions, due to the dependence of VET with respect to the movement of BTC.

In the medium term, VeChain has started to exit the bearish trend, and is slowly starting to build an upward channel. 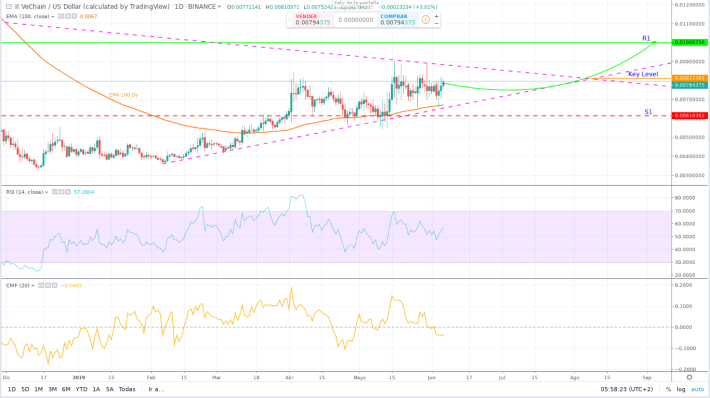 RSI is bullish, with a strong change of positive slope towards overbought territory, indicating the strong purchase pressure on the asset.

CMF, on the other hand, has made a stop to the migratory flow of capital out of the VET ecosystem, which could change to an area of ​​investment gain that drives the price of VET to levels of R1.

VeChain is a blockchain platform that offers Blockchain as a service for companies and information. Through effective collaborations, companies can enjoy the benefits of transparency and value streams at high speeds.

Vechain was founded in Singapore in 2015 and since then its development team has opted to generate business-level solutions with blockchain technology, focused on smart contracts and specialized in decentralized applications and initial offers of currencies.

Due to its founding year, in the initial stage of the adoption of blockchain technology, the cryptocurrency development team has years of experience as one of the first blockchain companies on the scene.

Its utility network includes the tracking of items in the supply chain in the fields of luxury goods, agriculture, logistics, food, hydrocarbons, automotive and drugs.

Its main headquarters are in Shanghai, with offices in France, Hong Kong and Singapore.

Its scalability level of up to 10,000 TPS has allowed it to position itself as one of the options for the use of real cases in the blockchian industry. The project is led by Sunny Lu and is legally run by the VeChain Foundation.

And remember, do not despair and do not lose your crypts by FOMO ... The whales let the bears attack to be able to buy cheap and accumulate ... do not sell your cryptos for nervousness and despair ...