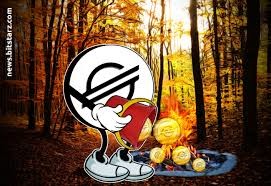 significantly reduced the number of tokens available as part of an effort to make the network more efficient.

SDF burned more than 55 billion of 85 billion tokens allocated for partnership and gift programs. In a short time a positive response and crypto currency rose 25%

There are a total of 50 billion XLMs in the world, including tokens reserved for the partnership and gifts they are talking about.

SDF stated that token burning is aimed at making the system more efficient as the system progresses and said, “SDF can do what it needs to do by using less token. Over the years, we have seen gift and airdrop programs have mitigating effects, especially when they are designed to support our original plan. Therefore, the impact of a smaller program for the public will be the same.

The foundation announced that they will use 12 billion of the remaining tokens in line with an aggressive development and dissemination program for Stellar. They also said they would double the number of employees by the end of this year.

It will be distributed.

They also announced that they are planning to lift the inflation tool, which they think is no longer useful for network participants, with the next update in September.