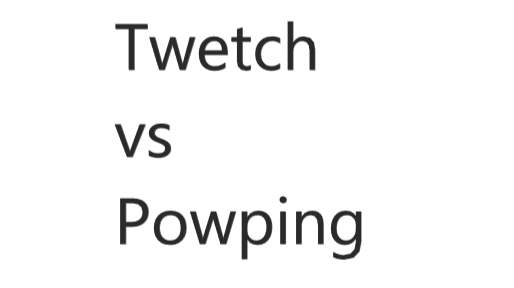 During the past couple of weeks, I have been involved in an interesting personal experiment. I compared Twetch and Powping with each other to determine which one I will ultimately select as my social cryptocurrency based social media platform of choice.

I will start by showing a couple of interesting facts that both of them have in common:

So, let me explain the different models Twetch and Powping uses:

Twetch is a paying platform where every post will cost you a couple of cents. This includes posting a new post, replying to a post, branching a post, sending a tip to someone using /pay, etc. By paying for every post, you inherently are paying for every transaction that you make to be stored on the blockchain forever. Yes, forever, because that is the nature of the blockchain. I will not go into the details of how the blockchain works in the post.

You might think oh why would I pay to post or reply to a post? Well, it is very simply. You will be paid too for every reply to a post that you sent. Your post will be stored through a validated transaction forever. This means that in a 100 years from now your children will be able to read what you wrote today. Twetch fully implements the Proof Of Work (POW) methodology of the blockchain using hashes for every transaction that is made.

Twetch does not have a tipping mechanism, but instead uses a Like feature. This feature is hooked up to a fixed predetermined amount per like. This works very well. In addition, if you want to send someone money, then you can use the /pay feature. This is essentially a tipping feature as well as a reward system which is very powerful, This /pay command line function (reminds me of DOS and is very cool) is used a lot for rewarding anything from thanking someone for good content to paying someone for a piece of code written, etc.

Twetch has a very powerful command line command system which can be used for anything from paying someone (/pay) to putting a troll toll on some users head (/trolltoll).

Twetch is currently limited to the amount of characters (256) allowed in a post. This is a very seriously drawback, but I have seen signs that this will be increased in future.

Uploading images and including them in a post can be very expensive and is a very big disadvantage using Twetch.

Twetch also shows publicly which new features are being currently developed (or planned to be developed). Any user can contribute towards this development too.

Powping is also a paying platform, BUT where ONLY the tipping function will cost you money. This tipping feature, which is one of Powping's main distinguishing features, is optional and the user is by no means forced to pay anything to another user. It is only seen as being polite to tip someone for their valued posts. This is done religiously by only an elite few. This has the effect that there are only a handful users tipping and thus a lot of users just trying to milk a couple of cents from these handful of polite users.

Powping has a handy Block feature where one can block (mute) users selectively. This works like a charm to a certain extend.

Powping has a cool feature called Channels. This is a way of creating dedicated chatting rooms in PowPing where only users registered to a particular channel will receive those posts. This works well and has some potential, but still needs a bit of improvement in execution.

A very big plus for Powping is that you can upload any picture up to 5mb for free. You can upload some flashy animated gif's if so desired.

I think both platforms are very early in the market and both can improve in time.

Twetch, by having a paying philosophy for every post, has arguably the better content. This is a natural result resulting in users to not just post any nonsense that occupy their heads, but instead post more valued and selective content, because of the financial implication to the poster. The new features being developed for this platform looks very promising and once rolled out will inflict a major advantage over the competition.

Powping on the other hand has no posting limits and anyone can post anything without limitation and incur no financial cost. This can cause uncontrolled flooding of unwanted content if you do not block certain culprits on the platform. However, being able to send pictures up to 5mb is a major draw card in my opinion.

To be honest, if you want to use either to make money then you are in for a realization. You might make a couple of cents or even a dollar here and there, but at this stage, with the limited number of active, tipping users, it will still take a while before you ditch your 9-5 job and work from your sailing yacht in the Pacific. Yes, that is my dream soon.

So the big question. Which platform is the best?

My personal choice, at this moment, is towards Twetch purely for its original and selective content. However, until I can post pictures on Twetch at a reasonable cost, I will use Powping for posting pictures and express that side of me.

Anything related to Bitcoin