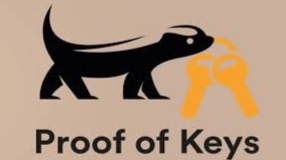 3 January and the Bitcoin Genesis Block

DISCLAIMER: This is a re-post of an article that I wrote for Atomic Wallet Academy. The original article can be found here

“Not Your Keys, Not Your Bitcoins!”

This is probably the most famous slogan in the crypto community. It was made famous by Andreas M. Antonopoulos, a Bitcoin and blockchain expert. The slogan is meant to raise awareness of how important it is to be the only one who is in control of your assets, your future.

When Satoshi Nakamoto created Bitcoin in 2009, he had a vision of a world with financial sovereignty. A world where one person could send money to another person without using the services of a financial institution – a centralized organization.

But what do we have today? Cryptocurrency users rely upon and trust centralized exchanges to handle their money, similar to what banks do. Why do we have Bitcoin if we are not going to be our own bank?

January 3rd was the Proof of Keys Day

The Proof of Keys Day is an annual celebration created by Trace Mayer, a philosopher, entrepreneur, podcaster and Bitcoin investor.

Every January 3rd, cryptocurrency owners are reminded of how important it is to be in full control of your money and be independent of financial institutions and exchanges.

The first Proof of Keys day took place last year, on 3 January 2019. This is an important date in the crypto community because it marks the 10th anniversary of the creation of the first Bitcoin block, the Genesis block.

Many people have become used to leaving their crypto assets on exchanges. This is wrong for many reasons which will be discussed in more detail shortly.

For now, I am going to mention the 1st rule of Bitcoin one more time: “Not Your Keys, Not Your Bitcoins!” Make sure you remember this.

What does this mean? When you keep your coins on an exchange you are giving that exchange full control of your money. This is the equivalent of keeping your hard-earned wages in someone else’s wallet!

You trust that the exchange will keep your money safe and give it back to you when you need it. You need to ask them for permission to access your funds.

But what if the exchange doesn’t want to do that? What if it can’t do it because they no longer have your money?

We have witnessed hacks and scams in the crypto industry many times. The most famous case is probably that of Bitcoin exchange Mt. Gox. Approximately 850,000 Bitcoins were hacked and stolen from the users who trusted Mt. Gox to safe keep their money.

Fast forward to January 2019 and the major hacking incident of cryptocurrency exchange Cryptopia. Due to a security breach, hackers managed to steal around $16 Million worth of coins and tokens. Cryptopia never recovered and has since been liquidated.

Do you still think it is wise to keep your money on an exchange? Cryptocurrency exchanges are often targeted by hackers and thieves because of the share volume of assets they control.

The Proof of Keys day aims to encourage and incentivize cryptocurrency investors to move their funds from exchanges and keep them stored in private wallets that only they control. By taking control of your private keys you ensure that nobody but yourself has access to your funds.

Why is the Proof of Keys Day Important?

It is important because it agrees perfectly with the philosophy of Satoshi Nakamoto, the creator of Bitcoin. Complete independence from third parties and a new monetary system that allows the transfer of value without government control and inspection.

Cold wallets are wallets that are not connected to the Internet. Hardware wallets and paper wallets belong in this category.

Hot wallets are wallets that are connected to the Internet. Web wallets and personal accounts on exchanges are considered as hot wallets.

The Proof of Keys day is supposed to teach new investors how to create and use non-custodial wallets.

The differences between custodial and non-custodial wallets are explained in great detail here https://atomicwallet.io/custodial-non-custodial-wallets-comparison#custodial

New investors need to learn how to create and use safe wallets and transfer cryptocurrencies without intermediaries.

Only the owner of the private key is the real owner of the funds that private key unlocks. Assets stored on exchanges don’t belong to investors because they cannot be withdrawn from the exchanges without permission by the staff operating them.

Who owns your money? Is it your money if you need to wait to get access to it? 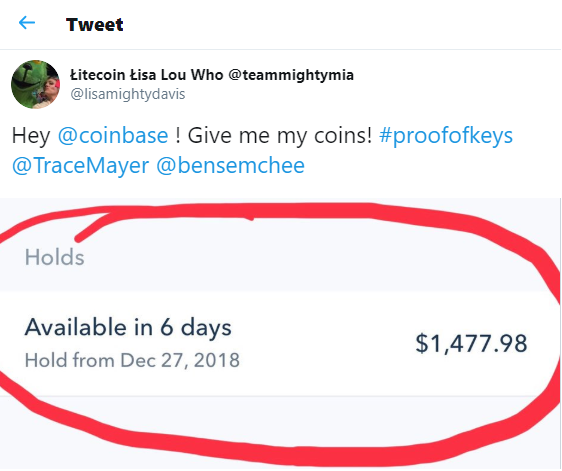 The Proof of Keys day reminds people to move money off exchanges and store them in private wallets whose keys are in your sole possession.

Don’t rely on promises and maybes. Don’t risk losing your money when better solutions are available. Take control of your future!

We, the people, have no control of the legal tender our governments print and issue. They have sole authority and control.

But they cannot control Bitcoin. By owning Bitcoin, we take power away from these centralized institutions. But the only way to fully do that is to own our private keys and in that way claim our monetary sovereignty.

Bitcoin is limited in amount. There is a maximum supply of only 21 Million Bitcoin. This number might seem big but think about it for a second.

That is a total of 22 million people. If every single millionaire in The United States and China wanted to own just 1 Bitcoin, they wouldn’t be able to do so. There isn’t enough of Bitcoin.

Something so scarce deserves to be handled with better care than left in the custody of others. Handle your keys with care and you will protect a rare asset class.

The first Proof of Keys day was the 10th anniversary of the Genesis Block, the first Bitcoin block that was ever mined.

The Genesis Block contains the first Bitcoin transaction that was ever sent. Satoshi Nakamoto sent 10 Bitcoins to Hal Finney, a developer, and early Bitcoin supporter.

In other historic early-day transactions, two pizzas were bought for 10,000 Bitcoins on the bitcointalk.org forum in May 2010.

One year earlier, Martti Malmi, a software developer from Finland sold 5,050 Bitcoins for $5.02. This is the oldest known Bitcoin to USD transaction. Blockchain information about this transaction is available here.

The day is meant to remember and celebrate a movement of financial independence that Bitcoin represents. Everything started with Bitcoin. Bitcoin is the original cryptocurrency that gave birth to an ecosystem that today hosts nearly 5,000 different coins and tokens.

Financial institutions practice something that is called fractional reserve banking. How does that work?

When a customer deposits money into his bank account he expects that he can access his full deposit whenever he needs to. Unfortunately, that is not how banks work.

When money gets deposited in a bank it becomes the possession of that bank. The bank uses that money as loans to other costumers and keeps only a part (a fraction) of the initial deposit, according to bank rules and regulations.

This is how loans create more money for the banks. The same system can be applied to cryptocurrency exchanges that costumers use to safeguard their money.

The Proof of Keys day encourages people to withdraw all their assets from crypto exchanges and in that way expose those exchanges who lie about the assets they handle and practice fractional reserve banking.

If all costumers decide to withdraw all their money on the same day those exchanges who hold only parts of the initial deposits wouldn’t be able to meet the withdrawal requirements of their clients. Such an event is known as a bank run.

Financial institutions don’t except bank runs to happen. Throughout history, such events only take place if costumers fear that a particular exchange is in serious problems.

The Proof of Keys day on January 3, is a perfect opportunity to test this theory and see where our money is being kept.

How You Can Support the Proof of Keys Day

Participating in the Proof of Keys day and supporting the initial thought of Bitcoin is easy. Withdraw all your crypto from exchanges and websites whose keys are not under your control.

Inspect your cryptocurrency portfolio to see where you are holding what and withdraw everything that is not 100% yours. 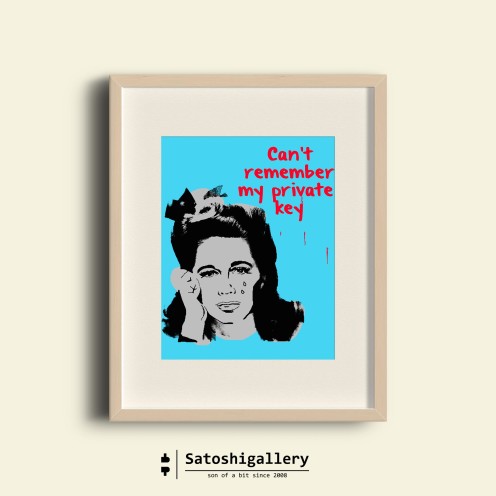 Chose a safe and reliable wallet where you can keep your coins with peace of mind. A wallet that represents security as well as usability. A wallet whose keys only you have and whose private data has been stored properly.

The users of HitBTC and even Coinbase had problems receiving their withdrawals. Bitfinex suspended their operations for a while but claimed that the problems were not related to Proof of Keys day but to a system upgrade. OKEx experienced a temporary downtime as well.

The Proof of Keys event is a wake-up call to active traders who keep most of their assets on exchanges out of simplicity to participate in quick trades or out of laziness in withdrawing them to private wallets. Join us on this day and regain your sovereignty.

It is time we start trusting ourselves as gatekeepers of our money because history has taught us that others are not doing a good job.

Proof of Keys day is an interesting initiative meant to remind the cryptocurrency community of how important it is to follow standard security procedures when it comes to handling financial instruments.

Is Bitcoin decentralized if you don’t even own it?

We need to start using exchanges for the purpose they were meant to serve – a medium to exchange Asset X to Asset Y. It is a place to trade and exchange currencies but not a place to store your most valued assets. 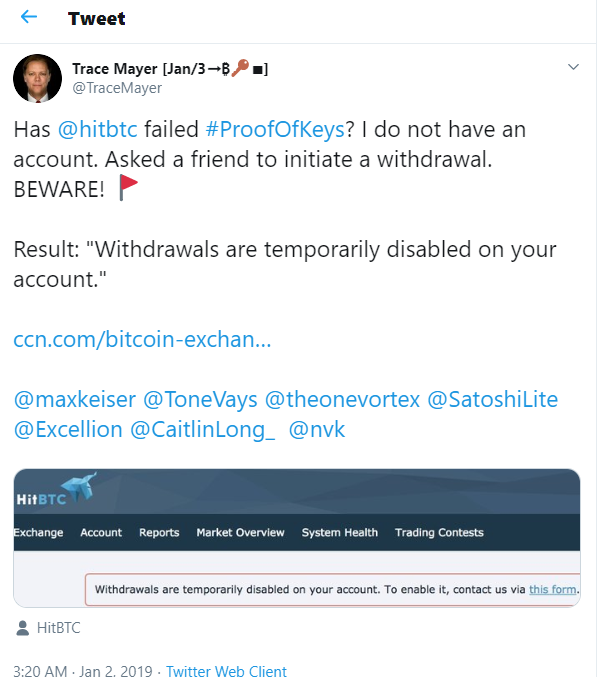 This is your money that you can't access because you decided that it was a good idea to trust it with a third party.

Standard operations slowly resumed but what if the exchange decided to keep your money even longer, or not give it back to you at all?! They didn’t, but they could have.

My personal opinion is that every day should be Proof of Keys Day. If Bitcoin was used the way Satoshi Nakamoto explained it to us, we wouldn’t need a yearly reminder. You don’t need January 3 to retake control of your coins, they should always be in your private wallets, except when you are trading and exchanging. If you still haven’t done it, do it as soon as possible!