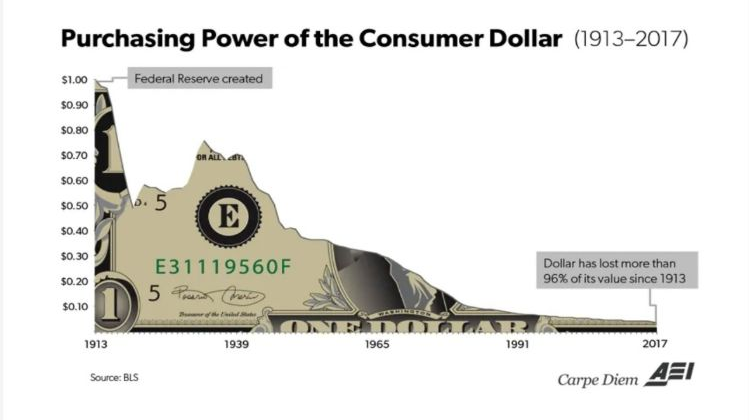 The History of Failed Fiat Currency

Fiat currencies suffer from overprinting - slowly building inflation and resulting in the loss of value. Throughout history, fiat currencies have repeatedly continued to rise until they eventually crash due to devaluation.

In our current financial system, paper money gets introduced to an economy where it first creates an economic boom, but on a long enough timeline is inevitably followed by a catastrophic collapse. Devaluation leads not only to the collapse of a fiat currency but to that of the economy supported by it until eventually, a new form of money becomes introduced to replace the one that failed.

The denarius was a coin made up of pure silver and is a classic example of a fiat currency that first saw a meteoric rise before its ultimate detrimental failure as a currency: through devaluing the silver content of the coin, the Roman emperor could simultaneously pay off his debts while generating wealth. This idea quickly caught on, and every succeeding emperor wanted to devalue the denarius to increase their wealth.

At the time of the once great Roman Empire's collapse, the denarius only contained 0.02% silver and could no longer be used as a store of value or even a medium of exchange.

In the 11th century, a Chinese bank situated suggested the use of paper as currency. For a brief moment, this seemed to work as people could trade their paper currency for goods and services. However, China eventually entered into a costly war with the Mongols, leading to the eventual defeat and the collapse of China's paper money.

Kublai Khan assumed the leadership of China following the war. Kublai was able to unite China by introducing a new monetary standard. Every year, he produced vast amounts of paper currency to the point of exceeding demand. This reckless action led to the fall of the paper currency – ruining even the wealthiest families, causing warfare and chaos.

After the first World War, Germany discovered it was not able to pay war reparations demanded by the Treaty of Versailles. To salvage the situation, the German government put their money printers to work and produced the extra cash to pay this debt while also paying demoralized German workers. Soon, too much money was in circulation – this led to hyperinflation and rendered the money worthless.

The largest denomination of the currency was 50,000, and by 1923, the denomination had climbed to 1 Trillion. The Germans began burning their currency to keep warm - as this was considered more efficient than using it for trade, and prior to the inevitable collapse, it was instead used to heat furnaces.

Unfortunately, the current United States dollar has the characteristics of all previously failed fiat currencies. For instance, the US dollar (USD) has lost 92% of its value since its issuance in 1913. Even after revaluation in 1934, the USD lost another 41% of its value. The USA has currently been increasing its supply of dollars by 13% – every year to pay off the national debt and due to this, the dollar is losing its value at an alarming rate.

Judging by the current fiat currency situation, the future of money looks best in the hands of blockchain technology and asset-backed cryptocurrencies. For example, Uniswap recently reached $3 billion in locked liquidity, despite little to no mainstream press. So while fiat currencies continue to be the standard for monetary exchange, history tells us they all inevitably fail at some point.

Bottom line: the endless printing of fiat currency is a game where everybody ultimately loses - and time WILL tell.