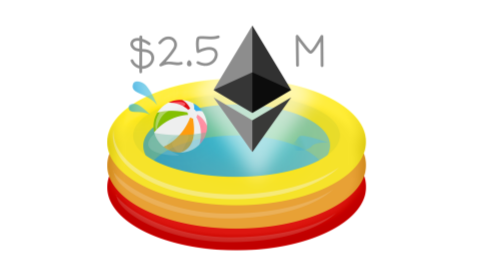 For the second time, an Ethereum user has attached a $2.5 million transaction fee to a relatively small transaction. Both were sent to mining pools.

Commentators have proposed many different explanations.

Programming error. If the account is scripted or automated in any way, its creator may have made a mistake in coding that caused the oversized payment.

Image boost. The mining pool could have sent funds to itself from another address, then returned it to its own address. This would generate free publicity for the mining pool and make it seem trustworthy to users. However, given that two different mining pools were involved (Bitfly and Sparkpool), this would involve collusion, which is unlikely.

Character attack. If the sender was confident that the mining pool would return their money, they could attempt to damage Ethereum's image with a controversy. This is incredibly risky, though, and almost implausible due to the large amounts at stake.

Money laundering. In theory, the mining pool that received the funds could be moving its own funds in a way that obscures its activity. This seems unlikely, given the simple path of the transactions.

Malware. Some hardware wallets contain a bug that allows malware to change transaction fees. This bug only affects Bitcoin-based coins, but it is possible that similar malware exists elsewhere for Ethereum.

The most likely explanation is a software bug or manual error, due to the fact that the error occurred twice in the course of a week.