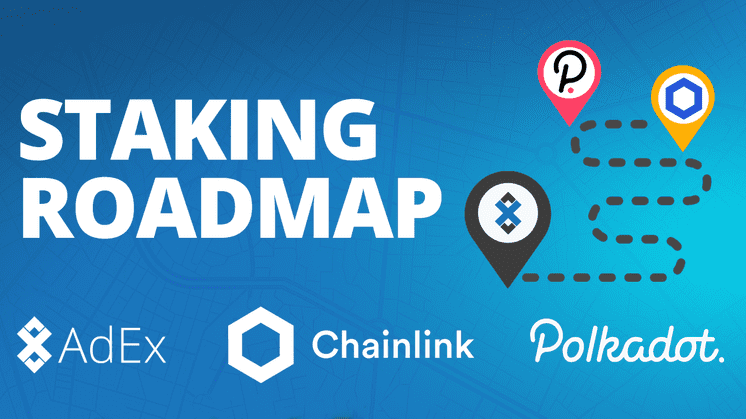 In late 2018, we announced the AdEx Registry - a system where validators can stake ADX against their performance and reliability to secure the AdEx Network.

At the end of 2019, we launched the AdEx staking portal, where anyone can stake ADX towards validator pools to earn from the fees they collect - therefore making the AdEx registry simple and accessible to all token holders.

Earlier this month, we delivered a huge batch of upgrades including incentivized staking and rewards in ADX, resulting in a combined annual yield of over 100% on the staked amount!

Today, we are excited to share the full roadmap of the AdEx staking portal.

To encourage the use of ADX for staking, we upgraded the token smart contract in order to enable minting new ADX to reward stakers. This mechanism greatly benefits stakers, and slightly dilutes non-stakers, therefore making it highly preferable for holders to stake.

This incentive model is somewhat similar to Compound’s liquidity mining, where new COMP is distributed to liquidity providers. In our case, stakers provide the network security, which is why we call it “security mining”.

On the 21st of August, this milestone was reached, all staked ADX were automatically migrated to the new contract, and withdrawing ADX rewards was enabled. The new ADX is already traded on all big exchanges.

We are planning a user interface redesign of the staking portal, which also includes some new features such as a staking calculator, gasless staking and others.

If there’s user demand, we will also integrate an ability to use the staking portal directly with WalletConnect, Trezor, Ledger and others (keep in mind, you can use Trezor/Ledger today through Metamask).

To encourage liqudity on Uniswap, we’re planning to launch a new staking pool where you can stake Uniswap LP tokens and earn ADX incentives.

If you’re familiar with Uniswap LP tokens, they’re ERC20 tokens that you receive when you provide liquidity in a certain Uniswap pool - for example, if you add some ADX and some ETH to the ADX-ETH pool, you will get some tokens that represent your share in that pool. You can trade in those tokens to get your liquidity back, but most importantly - this pool incurs trading fees that you earn. For a more in-depth explanation of Uniswap, check this article or this one.

Just like the validator staking, there will be a 30-day lockup to ensure liquidity providers cannot suddenly remove liquidity from the markets (“rug pull”).

The incentivized pools will be ADX-ETH and ADX-USDT, although more can be added later.

To simplify the user experience, we will allow staking USDT or ETH directly, and the staking portal will swap half for ADX, mint LP tokens and then stake them. Users will earn trading fees from Uniswap, plus ADX incentives.

To avoid fraudulent traffic, it’s important for advertisers to pick the publishers their work with. But how do we ensure that publishers are who they really are? Over the years, various mechanisms have been developed such as ads.txt/ads.cert to prevent spoofing or lower quality inventory being sold as high quality.

While we have equivalent mechanisms in AdEx, we are also in a unique position to enforce this through cryptoeconomic primitives, namely staking ADX.

With the new publisher pools, publishers will be able stake ADX, and if fraud is discovered (for example bot traffic or pretending to be another publisher) their stake will be slashed. Naturally, advertisers will prefer publishers with higher stake (i.e. with more skin in the game).

This feature is aimed toward crypto-savvy publishers, although it can be built into the platform in the future: for example, publishers will be able to automatically set aside a part of their revenue, which will be automatically used to increase their reputation stake.

Initially, we’re planning to start with a collaboration with Chainlink in which publishers will be punished if they lose ownership of their domain, which is something that causes a popular type of ad fraud where expired domains with high traffic are hijacked to generate impressions.

Both of these system working in unison will allow third party validators to stake and make their own staking pools, therefore paving the way for a more decentralized network - as advertisers will be able to easily delegate their own validator from a list ranked by stake and performance.